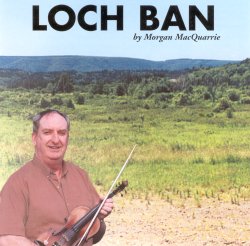 Mark Wilson - the man responsible for so many good things in Rounder's North American Traditions Series (www.rounder.com/rounder/nat) - told me recently "I recorded a CD in the spring of a very good traditional style fiddler from Cape Breton named Morgan MacQuarrie ... Musically it's a pretty good set - and it's not the modern Natalie MacMaster stuff that is largely what gets released out of Cape Breton nowadays", and asked if I'd like a copy.  Of course I said yes - but I was slightly concerned about who might be the best person to review it.

The issue was quickly resolved after I'd played about a minute of the CD ... I was going to review it!  Sorry, but it's another of those 'Type 2' reviews - I know next to nothing about Cape Breton fiddle music, but with this record, it's not necessary to understand anything; just sit back and enjoy the music ... the players certainly are!  The players, in this case, are the gentleman on our right and his pianist, Marion MacLeod.  One thing I do know about Cape Breton fiddle music is that there's almost always a pianist - and Ms MacLeod works even harder at enjoying herself than Mr MacQuarrie; playing the tunes as well as the backup, in most cases.  They are also joined, most effectively, by stepdancer Alexander MacDonnell on a couple of tracks, too.

The music is truly wonderful; bubbling along with such dash and enjoyment that I defy anyone but the stoniest-hearted old curmudgeon to avoid having a huge grin on their face from start to finish.  Don't expect the perfect studio performance where every set has been practised to death beforehand and the music you hear is probably the 4th or 5th take with every slightest mistake overdubbed to correct it.  No - this is far better than that - this is real music, played with joy and relish by what sound like real people - ordinary people, not technique-centred anal-retentives.  We're all flawed human beings - so what if there's a bum note or chord here and there?  There's certainly no bum music to be heard!

The tracks are mostly in sets of three or four tunes - either all jigs, all reels, or in the air/Strathspeys/reel combination.  Most of the Airs are song tunes played slowly in fairly even rhythm, rather than the free-rhythm sean-nós approach we may more usually associate with the term these days.  A fair number of the dance tunes will be known to British dance musicians - The New Rigged Ship, Haste to the Wedding, Flowers of Edinburgh, Miss Drummond of Perth and the ubiquitous Irish Washerwoman being among the most familiar.  The final jig on track 4, Orange and Blue, attributed to J Scott Skinner, may surprise some listeners who recognise it as Bob Cann's Hot Punch.

I don't propose to attempt to describe or detail it further - but this is a great CD of the sort of music you'd just love to be a part of in a session ... real music!  What higher praise?  To own a copy, contact: Morgan MacQuarrie, 7210 Winona, Allan Park, Michigan 48101, USA.