Beyond The Bellows and The Bow 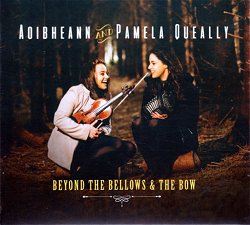 Aoibhean and Pamela are two young musicians from Kilmaley in West Clare.  They play concertina and fiddle respectively.  As sisters who grew up learning the music together they play extremely tightly, at a gentle steady pace with quite a pronounced bounce in their playing, reminiscent of Martin Hayes.  In many ways fiddle and concertina could be considered a classic West Clare combination and many years before Aoibhean and Pamela were born, Peadar O'Loughlin and Paddy Murphy set a standard for those instruments in duet, so the girls have a lot of heritage in their home place.

Many of the tunes are session favourites, like The Flax in Bloom or The Lads of Laois, others are more recent and a number of modern composers are credited, such as Paddy O'Brien, Liz Carroll and Maurice Lennon.  Others such as Sweeney's Buttermilk should be credited to Brendan McGlinchy and the tune following it, Maghera Mountain, is a composition of Martin Hayes.  The tunes in each selection are usually played twice through, almost without exception the exact same settings are played both times.  Subtle variation is an integral aspect of Irish music to maintain the listener's attention.  While this CD has the immediate attraction of well-played and rhythmic tunes, repeated listening does not bring out anything fresh.  We would hope for another recording in a few years' time when the musicians' individual characters are given a chance to express themselves.  As illustration, Pamela throws in a few more variations in her solo playing of the Pidgeon on the Gate.  Apart from one solo from each player, all the tracks are played in duet, with All Ireland champion box player Nuala Hehir joining for one track of reels.

Accompaniment is provided by bouzouki, guitar or piano, usually one accompanist to each track.  Several tracks give an unaccompanied tune at the start of the set. To this reviewer, the bouzouki adds little, as it provides neither rhythm nor follows the tune melody particularly closely.  The guitar is very effective, tasteful and sympathetic; and the piano adds a nice bounce, and really lifts the hornpipe track when it comes in on the second time through the multi-part tune.  The CD has some brief notes about each tune, mostly which other CD or musician the girls got the tune from.

All in all, a pleasant enough CD but lacking a bit of depth, possibly due to the restrictions the two musicians put on themselves to maintain the tight settings throughout the record.  The recording is available through Bandcamp https://thequeallysisters.bandcamp.com/album/beyond-the-bellows-and-the-bow in a variety of formats, or as a CD from Custy's.