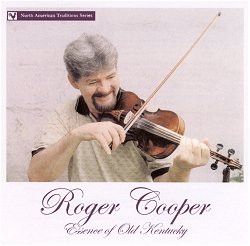 This CD is the latest offering in producer Mark Wilson's North American Traditions [NAT] Series released by Rounder Records and the second such recording to highlight the fiddling talents of Roger Cooper of Lewis County, Kentucky (there is also a cassette tape on the June Appal label).  At a generous 34 tracks, this recording clocks in at a bit over 71 minutes, resulting in a full sampling of Roger's expansive repertoire when taken in conjunction with his previous CD for Rounder, Going Back to Old Kentucky (Rounder 0380).  As with any NAT CD, there are two matters to consider when reviewing the release: the music itself and Mark Wilson's thorough documentation of the musicians and their backgrounds.

Though his playing can certainly be quite elaborate, it is never overdone.  Roger plays the tunes generally at a medium to fast clip, but demonstrates firm control of his technique in even the most complicated tunes on display here.  Mark Wilson's description of Buddy Thomas's aesthetic can easily apply to Roger as well: although [he] could execute fiddle tricks with the best of them and certainly liked to show off, he rarely spoiled the flow of his melodies with excessive 'hot dogging'.  Roger has ably created his own variations and arrangements of his tunes, but the core of the melody and rhythmic drive that is essential for dance playing is never lost.

Even on the tunes that might work better as listening pieces, such as the hypnotic Flannery's Dream, Roger's fiddling weaves an intricate web of phrasing that is built on a foundation of solid rhythm, which is most apparent on the solo tracks such as Hard Up Big Kanawha. (sound clip)

The accompanying musicians on this recording include renowned guitarist Robin Kessinger of St Albans, WV, and bassist and occasional guitarist Michael Garvin of Flatwoods, KY.  Both handle their duties with care and come from families rooted in old-time music.  Cooper plays Clark Kessinger's (great uncle to Robin) Gippy Get Your Hair Cut, a hard driving C tune originally released on 78 rpm record in 1929 on the Brunswick label (Br 364).  The CD is mixed to have the fiddle well to the fore, as it should be on a recording featuring the instrument, although the mix cannot hide one patch where the instruments fall out of synch with each other, on Birdie.

Yet the vast majority of the time, the back-up instruments compliment the fiddle's lead well.  I particularly like the closed chord swing jazz approach by Kessinger on Morgan on the Railroad, a melody attributed to African-American fiddler Jim Booker and learned from Jim Woodward.  The back-up instruments likewise lend a nice lilt to Dittany Tea, a distinctly 19th century-sounding tune learned from Jimmy Wheeler. (sound clip)

As the previous Roger Cooper CD for Rounder contained a full autobiography of Cooper (a standard feature of NAT releases), the notes to this newer recording focus more upon the music and its origins. The PDF format of the notes, a new feature to all North American Traditions releases, allows Mark Wilson an unlimited amount of space to explore the complicated relationships between the melodies and the fiddlers they represent (this PDF document is 32 pages).  One glitch that seemed to work its way past final production was the reversal of two melodies and their titles.  Track 30 is listed in both the attached PDF document and on the back of the CD as Soapsuds Over the Fence when it is actually Briarpicker Brown.  Likewise, track 31, listed as Briarpicker Brown is actually Soapsuds Over the Fence.

The renowned fiddler Buddy Thomas was Roger's single biggest influence, a towering figure in Kentucky fiddle music who imparted to Roger not just his musical stylistics but also his unique philosophy and perspective on fiddle music.  Buddy stood at a crossroads of Kentucky fiddling; able to play with contemporary bluegrass bands and to rattle off the latest fiddle "hits", he also had a firm grasp and appreciation of the older fiddle styles, both archaic and complex.  Among the key sources of both Buddy and Roger's music was a group of fiddlers based in and around the town of Portsmouth, OH across the river from Lewis County, KY.  These included fiddlers Jimmy Wheeler and Morris Allen, whose tunes feature on this recording.  Mark Wilson describes the Portsmouth fiddle style as follows:

The tunes they enjoyed tended to be elaborate in their melodic contours and appear to derive substantially from popular dance music composition of the late nineteenth century. To many Southern ears, these fiddle tunes would have sounded "northern", although, in fact, they more accurately reflect fin-de-siecle mores of popular song composition.

Employing complex bowing, phrasing and ornamentation, the Portsmouth fiddlers (and thus both Buddy and Roger) elaborated on the local repertoire and obtained several choice pieces out of M M Cole's One Thousand Fiddle Tunes (published 1940), which itself is a reprinting of William Bradbury Ryan's 1883 collection, Ryan's Mammoth Collection (with some changes).  At least four of the tunes that Roger plays here can be traced to One Thousand Fiddle Tunes, although Roger himself appears to have learned all of these pieces from other players, not the book.  The notes do not state it specifically, but it appears that Roger himself doesn't read standard musical notation, which has little bearing on his ability to learn and play the tunes.  It is explained that at the dawn of the 20th century fiddlers in Portsmouth would host gatherings where a pianist would play tunes from sheet music for the fiddlers to learn.  John Summers of Indiana similarly was able to learn tunes in this manner and eventually taught himself to read music, after a fashion (per Joel Shimberg, though he correctly learned the value of notes, he didn't necessarily learn the rhythmic values correctly).  One of the tunes on the recording found in One Thousand Fiddle Tunes is Paddy Bids Farewell to America, which Roger actually learned from George Hawkins of Bath Co., Kentucky.  Hawkins is featured on another Mark Wilson project (recorded also by John Harrod and Gus Meade), Traditional Fiddle Music of Kentucky: Up the Ohio and Licking Rivers (Rounder CD 0376).  Though not from Portsmouth, he shared to a certain extent the fiddling aesthetic as described above, demonstrating that these stylistic preferences can cross widespread areas, but may not include all fiddlers in a given locality, hence the difficulty involved in trying to define and attach stylistic tendencies to a given region.

Though some standards of the fiddle repertoire (such as Dance All Night and Nancy Rowland) are present on the recording, the majority of the tunes are regional and local favorites.

Some trace to early 78 RPM recording artists from Kentucky and West Virginia such as Clark Kessinger, Jim Booker, and Doc Roberts.  Roger nicely handles Shortening Bread (sound clip), successfully incorporating elements of both Doc Robert's and Jim Woodward's playing of the tune, which Wilson helpfully notes traces to previously mentioned African-American fiddler, Jim Booker.  Contrast this rendition with other versions by Dwight Lamb and James Bryan.  Lamb, who can be heard playing the piece on Hell Agin the Barn Door ( Rounder 0529) called it Irish Cobbler and learned it from Bob Walters, while Bryan, a contemporary of Roger's from Alabama, learned the tune from the Doc Roberts recording and played it on his 1983 recording for Rounder, Lookout Blues (Rounder 0175).  All have singular takes on the melody, none overly derivative from the other.

The tangle of fiddlers learning music from each other can be just as convoluted in the present as it was in the past.  To follow this line of thought for a moment, the aforementioned James Bryan learned much of his music from bluegrass fiddler Kenny Baker, who supplied a recording of Texas Fiddler Lewis Solomon to Ronnie Eldridge, a friend of Roger Cooper's.  That friend passed the recording on to Roger who learned two of the tunes he plays on Essence of Old Kentucky, Sally Growler and Queen of the West.  To peer yet further into the thicket of connections, both of these melodies are found in M M Cole's One Thousand Fiddle Tunes!  It is no understatement to say that this tracing and unraveling of relationships could go on for a very long time, and demonstrates the depth of Roger's involvement in the fiddle tradition of Kentucky and beyond.

Overall, what is unique about Roger's repertoire and inclination towards 'notey' tunes is that few others are playing these tunes today.  There are certainly some on this CD (Martha Campbell, Nancy Rowland, and Yellow Barber, for example) that get a regular airing, but many more that do not.  As is the case Dwight Lamb on his recent Hell Agin the Barn Door, Roger Cooper exhibits a larger than normal variety of tunes compared to contemporary old-time fiddlers.  These included square dance breakdowns, waltzes, jigs, and even a couple of polkas!  Despite the fact that these sorts of tunes have fallen out of fashion in Southern fiddling circles, it is refreshing that Roger Cooper is still playing this repertoire and that it is being shared via this recording.  Cooper's music represents not just himself, but the music and lives of the numerous men and women he learned from and befriended - a good portion of whom are no longer alive and live on largely through his music and remembrances.  In documenting these connections and Roger's community of musicians in Kentucky and beyond, Mark Wilson once again demonstrates the knowledge that has come from a lifetime absorbing and documenting traditional fiddle music.