How vast is the world of music, and how remote are some of its regions!  And how strange an observation when the racks of specialist record shops collapse under the weight of sounds exotic and far flung.  Yet, although the Indian state of Rajasthan is fairly well represented on record, it appears so little travelled that The New Grove Handbook of Ethnomusicology doesn't even acknowledge the place.  Neither does Encyclopaedia Britannica.  What few facts I have discerned come from the Internet and from travel books and from one or two recorded anthologies.

In fact Rajasthan - the name means Land of Kings - is located in North West India near to the Pakistan border.  It is largely covered by the Thar desert which has, incidentally, the longest irrigation canal in the world, and it comprises twenty-two former princely states.  Before being suppressed by the Mughal empire and then by the British and finally by the fledgling State of India, it was a land of fierce warlords and marauding tribes and feudal obligations.  It was also a place of great opulence and splendour, with a heritage of magnificent palaces and fortified hill top cities.  The main trade routes to and from India have to pass through Rajasthan, a fact of geography which seems to have done much to shape its history. 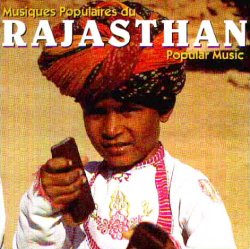 I mention these details for two reasons.  Firstly, because Rajasthan's flamboyant past is manifested in the culture of its people; in their dress, their behaviour, their exotic festivals, and their music.  Secondly, because it offers a clue as to how the economy of a dry and arid desert came to support one of the richest musical traditions on earth.

So colourful is this music, and played to such a high standard, that it is difficult to imagine a record producer going wrong.  Playasound is a label whose production and documentation I have in the past found rather variable.  Here, I am glad to say, the performances are exemplary and the notes, in French with well written English translations, at least try to be.  What failings are exhibited are by no means confined to the present offering.  Even allowing for CD booklet limitations, the weaknesses are all too typical of this type of anthology.

In this case we are given a brief resumé of the human geography of Rajasthan, together with substantial information about the instruments.  They are classed in accordance with ethnomusicological convention as aerophones, chordophones, membranophones and idiophones.  Common parlance renders these respectively as winds, strings, drums and miscellaneous instruments such as clappers and cymbals.  Unfortunately, the track listings tell us very little about the music, doing little more than supplement the information on the instruments.  We are left even more in the dark where performers are concerned.  Lead musicians are identified for thirteen of the sixteen tracks, and then by name only.  Otherwise, we told absolutely nothing about the people who create the music.  These are field recordings made in a variety of locations.  Whether they are also made by a variety of musicians, or by a single troupe, is impossible to say.

In short, the notes do not give the Western listener much to go on, and I am left with a series of tantalising impressions, based on aural evidence and intuition.

The disc opens with a dazzlingly seamless improvisation on the shehnâî (oboe).  It is seamless because, in common with many other third world musicians, the performer employs circular breathing.  That is, he inhales and exhales simultaneously.  The improvisation seems to be built neither on a raga system or on anything resembling a western chord progression.  Instead it consists of an electrifying series of variations on a ten note figure, which occurs and re-occurs throughout the piece.  Again and again the performer returns to this figure before starting off in a new direction, with a set of variations as fantastic as the ones he has just left.  Like Shakespeare's "Star to every wandering barque" it is a beacon of simplicity amid oceans of complexity.

The simple and the complex act as binaries in a lot of World music, and Rajasthan is no exception.  In the Bhajan (devotional song), a solo singer intones a melody of nursery rhyme proportions against a baffling set of polyrhythms.  The notes tell us that they are supplied by a percussive lute, a cup cymbal player, and a waterpot performed after the manner of an American jugband.  Aural evidence tells a lot more.  Unless I am hearing a trick of stereo reproduction there are two cymbal players keeping perfect time with each other, plus a dholak (drum), plus at least two other singers.

Listen also to the plethora of rhythms which accompany the Muslim wedding procession.  Harmonium and two sarangis accompany an extraordinary vocal extravaganza in which the singers shout their jubilation to the skies.  For sheer delight it would be hard to imagine anything more exhilarating than this.

Less appealing to the ear are several solos played on the narh (flute).  Here, instead of circular breathing, we catch the sounds of intermittent throat clearing and coughing.  I have never heard anything like this, either live or on record, and wonder whether it is a function of microphone placement.

I am curious also about the inclusion of an open air evening raga.  It is just over five minutes long and we may wonder whether this is an extract or an entire performance.  Open air ragas have their function in India, but in this case there is no drone to supply the groundnote for extended improvisation.  I am left to wonder if the term raga has a different meaning in Rajasthan to the rest of the subcontinent.

Which brings me back to where I came in.  Why do the compilers of third world anthologies so frequently ignore the social context of musical performance.  Who makes the stuff, where, and under what circumstances are questions collectors in the West learned to ask long ago.  It is surprising that their confrerès, working in less familiar corners of the world, often treat such considerations with scant attention.

Thus, we find a woolly ascription of terms, for the musicians are described as folk and popular indiscriminately.  They are different music forms, subject to different influences and we need to keep those differences in mind.  The American folklorist, Norman Cohen, has come up with a useful demarcation.  Folk music, he tells us, is made for personal consumption within networks of kinship and community.  That which belongs to a wider audience and is made for commercial gain, he labels popular.  Cohen was seeking to contextualise a commercial hillbilly music, which was often made by amateurs, and which overlapped with, and fed back into, the folk tradition.  Here we have a music made by professionals, whose music making comes about via caste membership.  It is quite distinct from that which "shepherds commonly play for their own pleasure", as the booklet quaintly puts it.

If these are professionals, who are their patrons.  I doubt that we are hearing the residue of the now obsolete maharajah's courts, for the music sounds too unsophisticated.  I have mentioned that Rajasthan is a land of colourful festivals.  It also has a plenitude of fairs and markets, to say nothing of extravagant weddings.  My guess is that you would search such venues to find the musicians who play here.

So, confusing documentation notwithstanding, this is wonderful music and it will more than repay your close attention.  Indeed, some of the most startlingly beautiful sounds you're ever likely to hear have been captured on this disc.  However, Playasound enter a crowded market and Saydisc, Navras, Ocora and King have all released highly commendable anthologies of the music of Rajasthan.  There is little to choose between any of them but, with a playing time of fifty-three minutes, this one has a sizeable disadvantage.  A little shopping around will reveal that the Saydisc is easily available, is about the same price, and has an extra twenty six minutes.  If you just want to sample the music of Rajasthan this is not the issue to go for.  If you end up getting hooked, and that is a distinct possibility, it is definitely one to add to your library.