The music of the Indian Ocean island of Madagascar, way off the coast of East Africa, has numerous links with other world traditions as a result of the country’s varied population history, whilst sounding thoroughly unique.  As a result of the country’s eighteen distinct ethnic groups, with Polynesian, Swahili, and Arabic racial origins, and its immense geographical and ecological diversity, there is a fascinating wealth of culture to explore.

Malagasy music and musicians have become increasingly known in the West over the past decade due in part to the work of bands such as Tarika but also, in large part, due to the pioneering work of Ben Mandelson and Roger Armstrong’s GlobeStyle record label who travelled to Madagascar back in 1985 to record some of the local music styles. 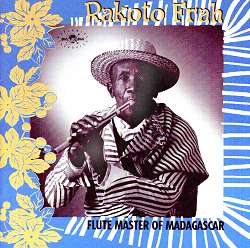 This fine CD is a re-issue of the vinyl release on GlobeStyle from that time featuring Rakoto Frah, the undisputed elder and master of the sodina (pronounced sood’n), the Malagasy traditional end-blown flute.  His status is such that he is even celebrated by being featured on a national bank note!

The music that Rakoto Frah plays is based in the Merina traditions of the Central Highlands of Madagascar, and in particular two distinct styles; one deriving from the famadihana ('turning the dead') exhumation and reburial ceremonies, and the other from hiragasy (hira = song, gasy = of Madagascar), a theatrical performance by troupes of players, featuring song, music, dance, proverbs, morality tales and so forth.

Famadihana ceremonies feature troupes of sodina and amponga (a European-derived military-style drum) players.  The events are rooted in the immense respect which the Malagasy people show their ancestors, manifesting in day or even week long celebrations of the dead.  Far from being sombre or macabre occasions, they are infused with joy and celebration, reflected in the wild, frenetic music that the musicians play for dancing (to please the dead).  The famadihana repertoire featured on this release is virtuosic, brash and energetic.  As this is music for the outdoors, the CD reflects the volume and tone of the instrumental line-up; key to the achieving the exhilarating, high-energy effect.

Ceremonies are competitive; judged by the quantity of musicians in a troupe, the prolific output of new tunes and the ability to keep the atmosphere going full pelt for the duration.  The events in which this master plays can feature up to 20 flute-players and drummers and Rakoto Frah had apparently created nearly 800 pieces at the time of this recording!  Here, however, there are just three sodina players: bright-toned and breathy.  Traditionally the flutes, with six finger holes and a thumbhole, were made out of bamboo, but the flutes that Rakoto Frah makes for himself are made out of metal tubing (ski poles are most favoured!) lending a certain harshness to the tone.

The hiragasy tradition is represented here by some distinctive, close harmony vocals of Rakoto Frah’s two young grand-daughters, singing songs on a variety of themes, both serious (relira) and light-hearted (zanakira): from commentaries on behaviour to descriptions of places.  The singing is bold and attention-grabbing and again the tempo is upbeat.

The instrumental pieces are also descriptive, inspired by the environment or social concerns and so forth.  As well as the vivacious sodina playing, the line-up features kabosy, a small guitar-like instrument with four to six strings and partial frets, and the rhythm-marking ambio claves.

As a bonus to the original vinyl release, the CD re-release incorporates some excellent revised and expanded sleevenotes (a GlobeStyle trademark) and a bonus track, Dihin Dratsimieloka.  This record is for connoisseurs and novices alike.  There's no finer introduction to the many-splendoured sounds of Madagascar.