The folksong scholar Kenneth Goldstein once told me that, of the hundreds and hundreds of traditional singers he had recorded in Newfoundland, his favorite was Dorman Ralph.  Blind since soon after his birth in 1923, Ralph spent his early life in rural communities in White Bay, Newfoundland.  He learned to sing, and to play first the mouth organ, and then the melodeon, as a way of achieving social status and emotional connection with his family and friends, qualities that were often lacking for blind people in rural communities. 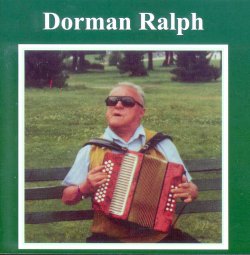 In 1956, he moved to St John's, where he gained access to the community of traditional music enthusiasts that flourishes there; he befriended musicians like Len Penton and Frank Maher, who often played with him, and helped folklorists like Goldstein and Peter Narvįez document Newfoundland's musical traditions.  Most importantly, he delighted audiences within his region with traditional Newfoundland music.

Like most traditional musicians, however, Ralph did not tour widely or release recordings.  When he passed away in 1999, I assumed that the only way I'd hear his singing again was to visit the various folklore archives where Newfoundland field tapes reside.  Luckily, I was wrong.  Peter Narvįez, a folklorist at Memorial University of Newfoundland, has made his best recordings of Ralph available on CD.

Ralph's singing is everything you want from a traditional ballad-singer strong, clear and plain-spoken, tuneful and intelligible.  These recordings show him at his best, in a comfortable environment that was nonetheless good for recording.  Generally, Ralph accompanies himself on the melodeon by playing the melody line along with his own singing; meanwhile, his soft foot-tapping keeps a faintly perceptible pulse, while clicks from the accordion's buttons add rhythmic effects.  On other recordings, these secondary sounds might be distracting, but on Ralph's they add to the immediacy of listening.  Indeed, at times it seems he is using the clicks to add to the music, which suggests what a master of sound he was.  The songs make it clear what a great resource Newfoundland is for folksong enthusiasts.  Versions of one Child ballad, The Cruel Mother, and a slew of broadside ballads from Britain and Ireland, plus American ballads about cowboys, and several purely local songs, show the range of material available to Newfoundland singers.  The highlights include two hair-raising supernatural murder ballads.  Pretty Polly is a complete and melodically unusual version of The Cruel Ship's Carpenter that ends with the ghost's grisly revenge (she tears her murderer in three pieces).  In Pat O'Brien, the ghost merely informs the town of the murderer's identity and leaves the rest to the hangman.  There are two ballads of the 'love token' variety.  One of them is a long song detailing the initial meeting of the lovers, the giving of the token (a ring in this case), the separation and the reunion; the other tells the more standard story of disguise and deceit, in which the lover arrives in disguise and reveals himself using the love token.

In addition to these standard international folk songs, Ralph sang a variety of purely local songs, some of which he composed himself.  This was a vital tradition among Newfoundland singers, the topics ranging from sea disasters to social occasions.  Ralph sings songs on both topics.  The Schooner Huberry, a song about the wrecking of an unfortunate vessel, was written as a narrative poem and printed in a source Ralph (being blind) never examined; it was read to him by his brother Herbert, and he liked it so much he composed a tune for singing it.  It's fairly standard broadside fare, stark and melodramatic, but Ralph makes it into compelling listening.  Captain Gulliver's Spree also falls into a recognizable genre the 'party-gone-wrong', in which a social event turns into a brawl.  Lanigan's Ball in Ireland, and The Kelligrews Soiree in Newfoundland are two better-known examples of this genre, and Ralph's text is just as funny as they are.  As to the purely original songs, the best is The Honest Fisherman, a song criticizing a local merchant named Richard Houndsell.  In the notes, Narvįez points out that writing critical songs about someone and then singing those songs when their subjects are present wasn't too uncommon in Newfoundland, and was sometimes called "to song" someone.  To the merchant's credit, he took it in good spirits when Ralph "songed" him, and indeed gave the blind youth a pound of tobacco for the dubious honor of being upbraided in song!

One feature of this CD that may surprise listeners is a pair of cowboy songs that found their way into Ralph's repertoire.  The American military had a strong presence in Newfoundland during Ralph's early life, and Newfoundlanders developed an interest in American icons of the old west.  The Franklin Bridge is a variant of Home Sweet Home, and tells the sad story of a cowboy who kills a neighbor in a fight and is forced to roam.  The Band of Mad Indians describes an attack by the Sioux on a party of cowboys.  It's unusual to hear songs like this accompanied on a squeezebox, and Ralph gives nice renditions of both.  Indeed, all the songs are a joy for simple listening, but offer greater rewards to people who listen closely sweet turns of phrase, unusual tune variants, rich dialect, and other details that will stay with people who love traditional music.

Five instrumentals (two jigs and three polkas) round out the collection.  Two are played on the melodeon, one on the harmonica, and two on both instruments simultaneously, a feat of skill Ralph obviously enjoyed.

Narvįez's recordings are clear and undamaged, a joy to listen to.  They were made in 1986 under what were obviously well-controlled conditions.  Narvįez's notes offer a wealth of information on Ralph and on the individual songs.  They're complete enough that I feel a sense of triumph when I know a fact about a song that he doesn't mention, but concise enough that they don't bore you with meaningless detail.  Most importantly, they're a fitting tribute to a great traditional musician.  Dorman Ralph will be missed by the sizeable community of musicians who build on his legacy, and this CD will show the rest of the world why.