I've always admired Trikont's releases if for no other reason than that you know that you're never really on safe ground with them.  Whether it's Finnish Tango, American Yodelling or one of my favourite releases of last year - Dead and Gone No 1 - Funeral Marches (Trikont 0234), there will always be something that either staggers, baffles or downright irritates you.  But, in fairness, you're never bored!

I assume this CD is intended to act as a soundscape of today's bar and street music scene in Saigon.  I say assume because while the English section of the notes (the bulk are in German) do give a brief and 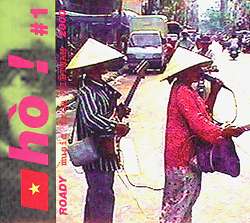 confusing account of the city's gay scene, and a useful recipe for chicken pho and noodles, they do not really help a great deal in putting this music into any context.

Whether the picture portrayed is an accurate one or not I couldn't say but as both the opening and closing tracks feature a dan bau (one string slide guitar) virtuoso with synthesizer, recorded on a floating restaurant

in the city's harbour playing Ghost Riders in the Sky one could maybe be excused for thinking that we are looking at the more bizarre end of things here.  (sound clip)

There is, I'm afraid, a fair amount of pretty uninspiring MOR here also - a rather cheesy blend of traditional instruments and schmaltzy vocals, Eastern film music and Western popular (well popular 20 years ago) that I can't see appealing to too many readers of this review.  Even less the younger and more heavily Western influenced and truly turgid SRV Opera Singers and Dylan Thanh.

No, but on the evidence here I would break the habits of a lifetime and vacate the bar to traipse the

But what will inspire me to return to this CD again are some truly wonderful brass bands.  Heard previously on the Death March CD, theirs is quite phenomenal music - thunderous drumming underpinning the most raucous display of discordant brass playing imaginable.  Apparently due to the climate all the instruments are permanently out of tune and on occasion the music veers towards cacophony, when suddenly the listener is pulled up by the strains

(very apt) of Lipstick on your Collar as on The Dead Men's Orchestra's Totencombo or, after a solemn dirge by the group Anh Sang that would not disgrace any New Orleans funeral march their jaunty reading of Never on a Sunday.  Blistering stuff! (sound clip 3)

So - something for everyone then?  Well maybe not, but for those in search of the exotic, the unusual or just plain weird, certainly enough to warrant giving it a try.  But be prepared for a few pretty uncomfortable moments.