i listen to the wind that obliterates my traces 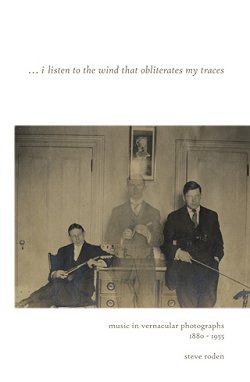 i listen to the wind that obliterates my traces.
the wind that resembles nothing,
understands nothing nor cares what it does,
but is so lovely to listen to.
the soft wind,
soft like oblivion.


Some years ago, in 1996 to be precise, I came across a double CD titled Ocean of Sound.  It was a collection of recordings that had been assembled by David Toop to accompany his book Ocean of Sound: Aether Talk, Ambient Sound and Imaginary Worlds.  I have to say that I was captivated by the recordings, which opened with King Tubby's Dub Fi Gwan and Herbie Hancock's Rain Dance and ended with a wonderful trio of sounds, namely John Cage's In a Landscape, Eric Satie's Vexations and a recording of a Suikinkutsu water chime.  In between these recordings were the sounds of Howler monkeys and Bearded seals (not at the time!), a Yanomani rain song, part of a Buddhist ceremony and diverse tracks from composers such as Miles Davis, Claude Debussy, Brian Eno and The Velvet Underground.

Why do I mention this?  Well, I have now been listening to another set of recordings which also come with a book, i listen to the wind that obliterates my traces, and, as with Ocean of Sound, I have been transported into yet another fascinating imaginary world of 'ambient sounds and aether talk'.

i listen to the wind that obliterates my traces comprises a book of old photographs, together with a double CD of early recordings.  The photographs and the recordings are from the collection of steve roden (roden, like the poet e e cummings, seems to eschew the use of capital letters, both in his name and in his writings), a man who, according to his web-site, is 'a visual and sound artist from los angeles (sic), (whose) work includes painting, drawing, sculpture, film/video, sound installation, and performance'.  This might sound slightly over the top, but, having read this book, listened to the recordings and admired the paintings on his web-site, I can only say that, in a world full of self hyperbole, all this could actually be true! Interestingly, and perhaps not surprisingly, David Toop recently reviewed this set in The Wire magazine.

So what do we actually get in this package?  The book begins with a short essay where roden describes his life as a collector and hoarder of things - specifically old photographs of musicians and musical instruments, and early 78rpm gramophone records.  One photograph is especially telling, showing, as it does, a man seated at a piano, a banjo and a guitar stand at one side, a phonograph at the other.  A caption, presumably written by the man himself, says, 'Papa and his only friends'.  steve roden clearly sees the implication here:

Just about the time this photograph was taken, walter benjamin was working on his famous essay about owning and collecting books - writing that it is not the books that come alive in the collector, but the collector who begins to come alive within the objects he or she has collected.

The following, slightly long, paragraph also reveals just what it is that has helped make roden what he is today.  It begins with a reference to Harry Smith, the maverick artist and film-maker who was responsible for Folkways Records issuing their ground-breaking Anthology of American Folk Music:

like the first great gatherer of old records and paper airplanes (not to mention hand-painted russian easter eggs and string figures…) harry smith was not only a forefather to those of us who collect recordings of early american music, but also one of the first to give relevance (and love) back to a series of humble objects on the verge of obsolescence…so do we who listen to forgotten musics (sic) in their original form give new life to voices lying dormant within the tiny confines of dust filled grooves.  as the record begins to spin i watch its scarred surface move in a circular whirl.  its visible history of handling - scratches, digs, cracks and chips - as well as the spinning colors of its label, confuses my eyes like marcel duchamp's rotoreliefs and brion gysin's dream machine.  immersed in silent wonder i breathe myself into the spinning object and set the needle down upon its surface.  i close my eyes, waiting for silenced voices to sing again as the needle begins to trace a pattern of concentric circles.  as the music becomes audible, i am immersed in distant voices singing through both space and time, and in the words of alfred g.  karnes, i have found myself within 'a portal, there to dwell with the immortal.'

There are well over a hundred photographs in the book, each one showing some unknown person or group.  Judging by the clothing, I would suggest that some of these pictures date back to the time of the American Civil War.  There are pictures of black guys with guitars and white guys with fiddles.  One picture, which shows a fiddler and a guitarist, is simply captioned, by the photographer, as 'An Ozark Mountain Orchestra'.  Did any of these people, I wonder, ever make their way into a recording studio and, if so, could we be looking here at some of the 'unknowns' whose identities are still something of a mystery today? Not that it is all fiddlers and guitarists.  There are also pictures of musical saw players, melodeon players, clarinettists and drummers, and a large number of one-man bands.  How, I keep asking myself, did the one-armed guy shown in one picture actually manage to play all those instruments?  steve roden is right when he says that, 'between the covers of this book you will see, read and hear a collision of gathered forgottens'.  I especially like what roden has to say about Bradley Kincaid - once relatively well-known, now, perhaps, less so - and the song Froggie Went a-Courting:

he'd managed to get out of the way of his own fragile singing and wonderfully awkward sense of time.  he let the song breathe, injecting it with a rare essence of authenticity, feeling closer to the vulnerability of a beginner than the polish of a recording star.  froggie went a-courting seems something of an aberration within kinkaid's vast and mediocre discography, sounding more like music captured than performed.  while there are no individual elements that stand out, all of the recording's seemingly unremarkable bits coalesce into a single 'voice', setting the listener gently down upon a path that slowly moves from the mundane towards the utterly sublime.

We may say that, unlike the book's photographs, which all have a common theme, the assembled recordings cover a vast range of subjects.  They are, I suppose, linked by the fact that they come from steve roden's collection, but that seems to be the only unifying factor; that and the fact that they really are 'a collision of gathered forgottens' Interspersed between recordings of people walking on ice or snow, or of whistling mockingbirds, we find some classic blues and old-timey tracks.  Plus quite a number of what can only be called 'oddities'.  I never expected to hear an Hawaiian group playing Stack O'Lee Blues or a couple of flutes (?) working their way through a supposed Native American love song!  Then there are one-time popular songs, such as Nick Lucas's If You Hadn't Gone Away, Seger Ellis's Montano Call or Eva Parker's I See My Pretty Papa Standing on a Hill, which are seldom heard today.

One or two tracks have been reissued several times over the years, Kelly Harrell's Rovin' Gambler, Sam Jones's Cripple Creek and Sourwood Mountain or Sylvester Weaver's Damfino Stomp, for example.  But many tracks appear here for the first time.  Marc Williams's version of the old Anglo-American ballad William and Mary is new to me, although it could be based on the earlier commercial recording that Sam McGee made of the song and which is available on a Document reissue (DOCD-8036).  It is also good to hear Alf Taylor's quartet working their way through Brother Noah Built an Ark.  Maybe their version is not as strong as the one recorded a few years later by A A Gray & Seven Foot Dilly (reissued on Document DOCD-8002 as The Old Ark's A'Moving, but it is good to hear anything that Taylor, a fiddle-player and one-time Governor of Tennessee, made.  Surprisingly, to me at any rate, is the fact that I am quite taken by the raw vitality and sincerity of gospel singer such as the Reverend Edward Clayborn, whose Then We'll Need that True Religion seems to owe a debt to the work of Blind Willie McTell, and The Reverend Calbert and Sister Billie Holstein, a little-known couple who apparently did most of their preaching and singing on street corners.  Then there is Xango, an arrangement of an African chant made by the Brazilian composer Villa-Lobos, and sung by the black classical singer Roland Hayes.

Does it all work?  Well yes it does, and I soon found myself sitting back and enjoying the anticipation of just what exactly was coming next.  If like me you are getting rather fed up with the sameness of recently issued 'folk' albums, then this is the antidote.  There are some glorious sounds here and, leafing through the book, I found myself wondering if any of the people pictured in the photographs had actually listened to any of these recordings when they were first issued.  I hope so, because this is music that brings a smile to the lips, and that is something that we all need, regardless of time.