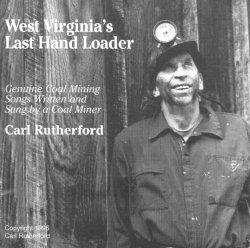 It may not be true to say that Carl Rutherford belongs to a tradition of American radical industrial songwriters - I simply can't say whether there is any direct connection to the likes of Aunt Molly Jackson or Sarah Ogan Gunning - but inevitably these are the connections that you make.  Certainly, he is a mineworker who writes and sings songs, both describing the working environment and commenting on the economic and social context.  In that respect, you might almost say that in one sense he belongs in the same tradition as Jack Elliott of Birtley, another miner who wrote and sang about his life and work, albeit several thousand miles away.  Rutherford's musical reference points are certainly that kind of distance from Elliott's.  He plays guitar in a flat-picked style that places it firmly in his home state of West Virginia.  This is country music, even if it is of a nature, both artistically and socially, that's seems long ago to have diverted at a tangent taking it a long way from where most other country music is today (he scarcely sounds like he is on the same planet as somebody like Garth Brooks), even such other acoustic variants as bluegrass, although the influence of bluegrass picking styles is probably a factor.  That the music is functional as well as commentating is clear from the instrumental tunes Miner's Hi Step, Fist Full of Picking and Ten-I-Shoe Waltz, which as well as showing off his skills and technique are clearly intended for dancing to - the clogging that accompanies the first of these underlining this point.

But most of this disc comprises material that is a long way from dance music.  Rutherford writes and sings with a depth and grittiness that suits, and probably grows straight out of, his experience of the miner's life.  Little Annie is a new addition to the catalogue of heart-stopping evocations of the consequences of a mining disaster.  Like all of the songs on this subject written from the inside, its focus is sharply on the immediate, shattering human consequences - Little Annie waits, shocked and cold, for news of her husband. 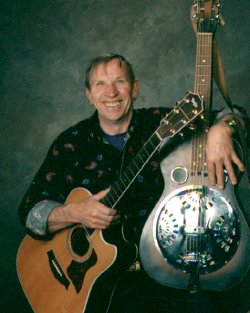 Almost as shattering is the impact of unemployment - Downsizin', or work-related illness - the title song West Virginia's Last Hand Loader, while You've Got to Turn Off the Fear highlights the way in which the miner has to block out the dangerous potential of his work, if he is to survive and make a living.

Tops Off Our Pretty Mountains laments the shift from underground mining to surface mining and the disastrous impact on the natural environment.  Nobody pretends these are black-and-white dilemmas, and the breadth of Rutherford's subject matter and his conciseness of expression speak of an understanding and an intelligence that goes well beyond that of most of those of us who observe these developments from the outside.

Lyrics are provided for all of the songs, and Rutherford's own notes, in his own unique style, put it all in context.  The dark subject matter and frequently rather stark musical presentation will not suit everyone, but listeners prepared to get inside Rutherford's musical world will find the experience challenging and satisfying, and given additional pleasure with the insight and wit of a genuinely original imagination.