When the album on which this collection is based (Folkways LP 2476) reached Britain, the status of Snooks Eaglin as a 'folk' musician provoked heated controversy over his 'authenticity' (he copied his lyrics from other performers). 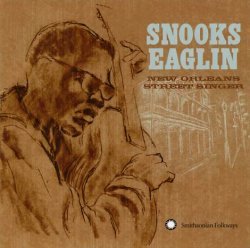 Truly representative folk singers, it was argued, composed all their own lyrics in addition to being skilled instrumentalists; for Eaglin was certainly an accomplished guitarist, as one listen to this revived and expanded version of his first LP will confirm.  At the time, notion of originality in the compositions of 'folk' blues singers rested firmly with the 'recognised' performer.  The idea of 'moveable' stanzas being taken from a common pool of lines, let alone the direct copying or adaptation of a song from another performer, or a recording by someone else, was taboo.  While remnants of these attitudes remain, there is now plenty of evidence to hand to show that not all 'worthwhile' blues singers wrote their own lyrics or performed their own songs.  Indeed the pre- or proto-blues generation of 'songsters' thrived on the interpretation of common repertoire, some of which has been traced to nineteenth-century publications, including sheet music.

Snooks Eaglin's interpretations stand in this venerable tradition of entertainment.  In any event, he was hardly a 'street singer' as the original romanticised album title described him - a title retained for this CD.  Eaglin was as much, or rather more at home with contemporary New Orleans Rhythm & Blues as he was with the utopian appeal of the blind otherwise unemployed black street musician who represented the persona of the troubled blues singer and his haunting message of sorrow.  This is not to belittle the quality of these highly evocative performances, but knowledge that helps to comprehend Eaglin as a performer and his subsequent recording excursion, with a New Orleans rhythm section led by Dave Bartholomew - the doyen of such productions.  These followed a year or two after 'Snooks' had been 'discovered' by Harry Oster, the folk song collector responsible for presenting him as an interpreter of 'folk blues'.

It appears the extra tracks in this CD came with the tapes submitted by Oster for the original release, for there are four alternative performances of items on that album and three extra performances which were not in the original collection.  One song, Mean Old Frisco, was formerly issued on a separate Folkways album (LP 2461), and One Room Country Shack is probably the same as the track issued on Folkways LP 4530 as Six Thousand Miles From Nowhere.

Despite the claim, therefore, that most of these are previously unissued, this is probably not the case.  The discography of Oster's Eaglin recordings is notoriously difficult to construct, with performances issued in Europe and the USA on a variety of labels in the early 1960s.  Thus, the versions of Walking Blues issued on Bluesville and Arhoolie in the USA are remarkably similar if not the same.  The 'unissued' rendition in this compilation (SFW CD 40165) is shorter in duration, but also maintains stylistic continuity and might be the same as that issued in Europe by Heritage (the label run by Tony Standish) and Storyville.  There are versions (the same?) of Who's Been Foolin' You on Heritage and Storyville, and Every Day I Have The Blues may correspond with Everyday Blues on Heritage (they are certainly performances of the same song).  The version of Come Back Baby is reported to be an alternative take to the performance issued on Eaglin's original Folkways LP.

Harry Oster had a particular interest in the originality of blues lyrics, and put special emphasis on this in his field recordings.  Although this was a primary concern, Oster was well aware that Eaglin's repertoire did not fit this pattern.  A systematic researcher, he elicited information on the provenance of Eaglin's songs; recollections that were printed in the notes to the original LP and are augmented here in the annotations of Elijah Wald, who is also responsible for the presentation of the CD.

These commentaries draw attention to Snook's eclectic taste in blues performances, but also reiterate his credentials and credibility as a singer-guitarist in the milieu of rhythm and blues and its particular New Orleans variety.

While Eaglin's Crescent City credentials are very apparent in the way he performs, the repertoire represented here is drawn from a much wider field of blues and rhythm and blues sources.  There is also a smattering of New Orleans jazz standards.  The latter include the sung performances of St James Infirmary (although Eaglin gave the Texas-born Kansas City trumpet player Hot Lips Page as his source for this), and Richard M Jones' Trouble In Mind, as well as the extraordinary guitar instrumental version of High Society.  Texas-West Coast bluesmen such as Amos Milburn, Charles Brown or the more 'down-home' performers such as Mercy Dee Walton and Lightin' Hopkins provide the starting point for several of the songs.  Others come from Chicago- or New York-based singers.  Titled Helping Hand in this CD the performance of A Thousand Miles From Home (original LP) represents the Dave Bartholemew-Fats Domino adaptation of country singer Jimmie Rogers' Waiting For A Train.  This provides an example of the way some songs seem to have a life of their own; independent of the genre with which they are generally associated.

There are two other tracks from the original album where new titles confuse slightly, most particularly Look Down That Lonesome Road, now The Lonesome Road; while Looking for a Woman was originally I'm Lookin' For A Woman.

The booklet that accompanies the CD contains a biography of Eaglin and, in addition to notes devoted to the individual songs, a general discussion of Eaglin's repertoire, including his more contemporary recordings (the most recent being a CD for the Money Pit label, issued in 2002).  Interestingly, Elijah Wald indicates that the initial LP (issued in 1959, but recorded a year earlier) was intended originally for the Elektra label rather than Folkways, and speculates that this might have influenced selection of the performances.  The series of photographs that Harry Oster took of Eaglin at the time the recordings were made are all reproduced in the booklet, together with an historic photograph of the Flamingos, the New Orleans rhythm and blues band with whom Eaglin had been playing several years prior to these recordings being made.

For some, the eclectic nature of Snook's repertoire may still inhibit appreciation of his skills both as a singer and guitarist.  Such reservations, however, should be overcome.  This is a compelling collection of blues performed to acoustic guitar accompaniment.  The revived and revised version of Eaglin's first album confirms his early recordings have stood the test of time and their message remains as vibrant now as it did over forty-five years ago, when first released.