The Arhoolie LP which, with two additional tracks, forms the basis of this CD must have been one of the first albums of old-time country music I ever bought.  (I believe the first was an Uncle Dave Macon compilation on Ace of Hearts, with Sam McGee and his brother Kirk backing up the old man on a few titles.)  I can't remember now what led me - fairly well-versed by then in black blues, but very ignorant about hillbilly music - to acquire Grand Dad Of The Country Guitar Pickers; probably I'd read about Sam McGee in Tony Russell's Blacks, Whites And Blues, and heard the original version of Railroad Blues ("Here come DeFord Bailey, now, with the harmonica") on Yazoo's anthology, Mister Charlie's Blues. 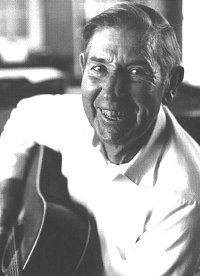 I wouldn't, even now, claim to be a great deal better educated about early country music than I was then, but it was a pleasure to play this CD for review, for it had been a long time since I'd reminded myself of just how remarkable a musician Sam McGee was.

McGee was born in 1894, so by 1969 and 1970, when Mike Seeger recorded the sessions from which the CD is drawn, he was in his mid-seventies.  "[H]is style had pretty well formed by 1910 or 1915," according to Seeger; he went on the road with Uncle Dave around 1918, and was recording and broadcasting by 1926.  McGee died in a tractor accident in August 1975 (still working his land at 81), at which time he was still an active musician, appearing on the Grand Ole Opry, where he played a a solo every Saturday night as a token representative of the old-fashioned music.  In other words, what you hear on this CD is a guitarist who had been honing his skills and developing his art for fifty or sixty years, and working as at least a semi-professional entertainer for forty of them.  He is assisted by Clifton McGee on second guitar, and bassist Goldie Stewart, but it will be obvious from the excerpts that their support is not a crutch for infirmity; anyone good enough to accompany Sam McGee at 75 had to be no slouch themselves!

To demonstrate how he never stopped learning, here's Wheels, which he heard "over the radio and I liked it and it just stayed with me and I got to playing it.  I don't know whose it is."  (sound clip)  It belonged to the Stringalongs, as it happens, but Sam makes it his own, adding muscle and bone to their novelty hit.

That process of making a tune uniquely his own can be seen operating in a number of places, among them, Dew Drop, which he learned only in 1969 from Burt Hutchison, who "used to play it about 40 years ago [ie around 1929]." This tune is typical of the parlor tradition: a pretty, straightforward tune, suitable for young ladies wishing to display their accomplishments on the guitar rather than the piano.  (Please note that it's not me being sexist, but the age from which the tune came.)  Without embellishing it or playing hot, McGee discovers an expressive potential that probably even its composer never imagined Dew Drop to possess.  Although, according to Mike Seeger, "Sam worked mostly as a blacksmith and also farming.  Music had always been a sideline," there seems to me to be both professionalism and a conscious artistry at work in his playing.  When he was growing up and forming his style, rural guitar music was undergoing a creative ferment, being cross-fertilised by African-American music (blues, ragtime and early jazz), and picking up Tin Pan Alley pop songs from sheet music, records and radio; Seeger characterises the result as "a less regional and more widely popular rural based music."

So it is that the turn of the century pop song Ching Chong (sound clip - about a Chinese man, and perhaps fortunately performed without the lyrics),

sits alongside the outlaw ballad Jesse James  (sound clip).  The first excerpt is played on the six-string banjo which McGee used on records in the twenties, the second on a five-string banjo, in a style accurately described as "three finger yet not bluegrass."

What I'm suggesting, in other words, is that Sam McGee was by no means a naive musician who just absorbed tunes and influences he liked, but one who set out consciously to master and to develop the styles and the material he was exposed to, both as a professional musician and as one who wanted to explore the world of sound, and his abilities therein.  His friend Fuller Arnold is quoted: "I heard him about thirty-five years ago and he played about the same stuff he does now other than he played Old Black Joe on his cowbells that he hammered out and tuned himself being a blacksmith."  Sam's response is, "Well, I try to play anything that comes up nearly," and when asked if he learned songs from his parents, he reflects, "That's where I made a mistake.  I didn't think too much about those songs at that time, because I was always looking for something else."

That "looking for something else" made him among the first, and one of the finest, of the hot country pickers.

He was heavily influenced by black musicians, and the effect is obvious on his circa 1930 composition Fuller Blues.  (sound clip)  McGee is, perhaps purposefully, vague about what he admired and learned from African-Americans, who are always referred to in the booklet's interview as "(Blacks)", perhaps as a substitute for a less polite term actually employed.  To say that, however, is not to detract from the brilliance of his own particular development of black guitar and banjo styles.  As I've attempted to illustrate by means of excerpts, Sam McGee was a musician who emerged from the folk process, but used his exceptional talents to master and channel it.  For sheer technical brilliance, there are few musicians who can match such feats as his adaptation of Fiddlin' Arthur Smith's Blackberry Blossom to the guitar; but it's not simply a display of empty virtuosity.

Readers may be wondering if there's anything negative to be said about this CD.  Well, even as a young man, Sam McGee wasn't much of a singer, and Burglar Bold isn't a low point merely because the notion of an "old maid" wanting a sexual relationship is not as hilarious as it used to be.  On the other hand, he does manage to surpass his vocal limitations on When The Wagon Was New,

which never fails to move me mightily with its evocation of the good old days that never were but should have been; and once again, the accompaniment may be simple, but the way it's played is not.  (sound clip)  This CD retails at medium price, and I suspect that there will be few better value releases this year.