Lead Me To The Rock

The question of reinterpreting traditions for a modern audience is one that is evidently of interest to readers of Musical Traditions, and if we're not careful, we can find ourselves very quickly engulfed by arguments over notions of cultural ownership and authenticity. 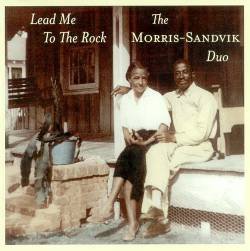 The present writer has spent enough of his life worrying about these things, and no doubt will spend more of it in the same way, but my engagement with the music on this CD is based on the fact that it seems to me to represent a fresh and a honest attempt to enter into, and to convey, some of the great qualities of the music it addresses - not to reproduce it.

The traditions in question are primarily vocal music - the sources are recordings of African American singers, mostly sacred material - with a particular focus on 'surge' singing, an antiphonal (i.e. call and response, or lining-out) hymn and psalm tradition with origins in Protestant services in the British Isles.  To quote Scott Sandvik's notes in the booklet: 'The style of singing was slow, seemingly without a pulse.  Each syllable could be stretched out over several notes in a highly ornamented style.  And though they were all ostensibly singing the same melody, each congregation member would introduce his or her own variations, the effect created being that of a kind of loose unison, a wave of human voices, surging up through the melody's arc'.  That's an excellent, evocative description and no doubt some readers will be aware of the kind of thing he's talking about, as folklorists have captured it on field recordings both in the Old World (see, for example, Tangent TNGM 120 Gaelic Psalms from Lewis) and in the New (the notes refer, for instance, to the Folkways recordings of people like John and Lovie Griffiths or Vera Hall and Dock Reed).  There have been commercial recordings too, in the US, both pre-war - one track here is based on one of Reverend J M Gates 78s - and post-war (Chris Strachwitz's compilation Singing Preachers and their Congregations on Blues Classics LP 19 is the best survey I've come across; sadly no longer available, although most tracks have been reissued on various CDs).

There's another interesting pointer here where the notes refer to Blind Willie Johnson's Dark Was The Night, Cold Was The Ground.  It was, says, Sandvik, Johnson's 'attempt to imitate the sound of a Baptist congregation singing this hymn in the moaning or surge style'.  Many readers will be familiar with Johnson's recording - or maybe one of the cover versions by the likes of Ry Cooder.  For those who don't know the Johnson record, suffice to say here that it consists of a slow slide guitar solo, with occasional moaning in harmony.  For those readers, I'd also like to say what a treat you have in store - for my money, it is unequivocally one of the greatest recordings of American music (see Yazoo CD 1058).  There's a decent version of it on this CD, too.

The Johnson connection is a useful one to establish, not just because of its offering a reference point for the listener, but also because the Morris-Sandvik Duo consists of a singer and a guitarist (Vanessa Morris and Scott Sandvik respectively).  One key factor is Sandvik's choice of instruments.  On most tracks, he is playing a fretless classical guitar; on a few, he plays a slide on a steel string guitar.  This - essentially - is a means of enabling the instrument to reflect the freedom of the human voice.  Traditional vocal styles typically being unrestricted by the tempered scales of Western Art music, voices use embellishments, elision, melisma in their exploration of the full range of tones and part-tones at their disposal - something that many instruments simply can't do.  Traditional instrumentalists have always sought ways round this - bending guitar strings, choking notes on a harmonica, even finding ways of coaxing flexible quarter tones out of a tin whistle or a flute.  Sandvik's choice of a slide and of a fretless guitar enables him to make use of all the spaces between the notes of the tempered scales - the microtones which frets are essentially designed to eliminate.

The core of each performance is in the interplay between the two voices, human and instrumental.  As Sandvik's description of 'surge' singing suggests, although they are both addressing the same melody, they're doing it through separate and individual explorations of it.  Sometimes, the two voices are extraordinarily close - like at the start of I Heard the Voice of Jesus Say.  The guitar then drops down to a lower string, so that there is more of contrast, then for a verse or so, Morris calls and Sandvik's guitar responds.  Then they're back together again, but on distinct tracks, then the guitar is more of an accompaniment than a separate voice, then it's filling in gaps between vocal phrases.  This gets stranger and stranger, with the guitar branching off at odd and unusual tangents, almost entering avant garde territory.  This may be a long way from the tradition (although these vocal traditions can get into some strange territory of their own), but it's a long way from the folk revival as well.

Other tracks are less unorthodox - the opener Lead Me To The Rock, for example, finds voice and guitar interacting in more straightforward ways, with the accompaniment almost being based on a riff in a couple of places.  The most conventional track is Over In The Glory Land, one of the great American sacred melodies, given a fairly straight reading - slide guitar and voice - but quite extraordinarily beautiful.  At the end of this, presumably in honour of this tune's connection with New Orleans marching bands, Sandvik creates an interesting effect by making his guitar sound like a snare drum.  As a teenager, I remember finding instructions on how to do this in a guitar tutor book.  It's easy enough - you bend the 5th string back over the 6th with your left hand while striking them with your right, and their rattling together makes them sound like a snare - but at the time, I wondered why on earth anyone would want to.  Now I know.

Talking of instrumental techniques, this is certainly a record to attract fans of innovative acoustic guitar playing, not least as it is quite unlike any that I've heard before.  There may be brief moments where the spirit of John Fahey is invoked (like on the long introduction to A Charge To Keep I Have), but most of the time, I'd say Scott Sandvik is reaching parts of the guitar's potential that few others have explored, and in any case it would be difficult, in territory like this, not to nod towards Fahey occasionally.  Another, more distant - and much less likely - connection, is with classical Indian slide guitarists, like Brij Bhushan Kabra or Debashish Bhattacharya.  I m not really suggesting a connection between the raga and the surge hymn - any aural similarity is probably entirely accidental, although in both cases the slide on the strings is used for its ability to elide tones and to move around in between them.

The other factor that seems to me to be of particular significance is the recording mix.  In performance, a voice would usually be louder than an acoustic guitar playing single notes; live, you would adjust this with amplification, and on record you achieve it by how you choose to mix the separate recording tracks.  My impression is that here the intention appears to be for voice and instrument to have exactly equal weight - maybe, even sometimes for the guitar to be slightly more prominent.  Remember, this is not traditional music recorded in the field, this is carefully constructed performance music in which a particular effect is being sought after, and in which the participants are modern individuals who know how to use the resources at their disposal - whether musical or technical - to achieve what they're after (and it is worth repeating in this context what I said before about this not being some misguided attempt to recreate authenticity).  The point of drawing attention to this is that it seems to me to help create a very distinctive, and slightly odd sound, whose very unnaturalness lends the music a particular haunting quality.

Lovers of rough old traditions may find all this a bit too stripped down and cleaned up for their tastes.  On the other hand, listeners used to the folk revival might find it a bit too strange, too experimental.  As noted above, there are times when it sounds almost like something from the avant-garde (it should be noted than Scott Sandvik has an academic music background, and that he is also a composer of contemporary concert music, specialising in microtonal works).  But it makes more sense, I think, to step outside the preconceptions of those camps, and see it as a serious (in the sense of committed, rather than of po-faced) attempt to create something new, while honouring the spirit of the old.  It is all done with consummate skill - Scott Sandvik is an outstanding guitar player and Vanessa Morris is a stunning singer - and apparent deep commitment.  Most importantly, there are moments of great beauty here, when - to steal Sandvik's own description of the traditions on which he is drawing here - they succeed triumphantly in 'surging up through the melody's arc'.

The CD is available from www.scottsandvik.com where a lot more information about both the original source material and the philosophy of the present reinterpretations is presented.