First, let's get the genealogy straight.  Santiago Jimťnez Jr is the brother of Leonardo "Flaco" Jimťnez.  They are sons of Santiago Jimťnez Sr, and grandsons of Patricio Jimťnez, both of whom were considerable musicians in their time. 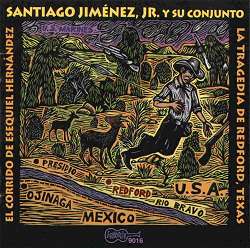 Santiago Jr leads his own conjunto, which has the usual line-up of accordion, bajo sexto (a large twelve-string guitar), bass and drums.  They play the lively dance tunes and sentimental love-songs of their regional tradition, in a manner that's somewhat different from Flaco's (for more on this, see the review of The Best of Flaco Jimťnez).  The accordion breaks are not quite as adventurous, while the beat is crisper and more insistent, with both drummer and bassist more forward in the mix than on Flaco's recordings.

Although this might suggest that the band is more oriented towards dancers than listeners, the instrumental tracks still make pleasant listening. (sound clip - Polka Potpourri)  But the most distinctive tracks on this CD are the two extended narrative songs by Santiago Jr, who is clearly a song-writer of considerable power.

The first, El Corrido de Esequiel Hernandťz recounts the tragic death of a local youth shot by US Marines, who were patrolling the Texas-Mexico border as part of the Federal government's 'war on drugs'.  The 18 year old goatherd was startled by the sudden appearance of the heavily camouflaged troops, and the fact that he was carrying an ancient rifle, to protect his beasts from wild dogs, was enough to seal his doom.  The story unfolds in a plain but intensely moving style, closing with a variant on the familiar ballad-singer's valediction:  (sound clip)

quť Dios lon tenga en cielo, - May God have him in heaven.
lo llevo en mi corazůn. - I have him in my heart.

The other big ballad, El Corrido de un Borreguero - La Historia de TomŠs Ballato, was composed as part of the soundtrack for a documentary film, A Sheepherder's Homecoming, and has a less obvious narrative line.  It's more of a series of reflections on the trials, and the continual homesickness, of the migrant worker, and as such it represents an honourable contribution to a long tradition of songs on this theme.

Taken all in all, this recording is a solid piece of work, which presents a good advertisement for the conjunto music of the Texas-Mexican border region, and merits the attention of any serious student of that style.  However, for the uninformed or uncommitted, I would recommend The Best of Flaco Jimťnez as a better introduction.