It doesn't seem all that long ago that only a couple of anthologies of reissues of early recordings of Jewish music were available, on Folkways and Folklyric respectively - tantalising stuff, bringing us some previously unknown sounds, and introducing us to a few of the key personalities.  Actually, on reflection, it is a long time ago, for Global Village have been on the scene for well over a decade, and having started with a couple of cassette-only anthologies of their own (one of which was a reissue of the Folkways), they now have a very extensive catalogue of CD releases covering a wide range of aspects of this music - among other things.

One of the names that the old anthologies introduced us to was Abe Schwartz, who was clearly a major figure in the early history of klezmer music on record. 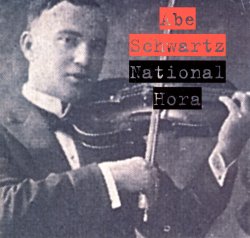 Schwartz was an immigrant to the USA around the beginning of the last century, having been born in Romania in the 1880s.  By the middle of the 1910s, he was recording, and over the following thirty years or so, saw a large number of recordings released.  The market required him to be versatile, and he was violin player, pianist, bandleader, soloist, accompanist, composer or whatever, as required.  Included here is a selection covering most of these eventualities.  The records were credited to a variety of different orchestra names - Gus Goldstein & Co, the Russian Folk Orchestra, the Oriental Orchestra, the Yiddisher Orchestra, and they even occasionally appeared with Schwartz's own name on them.  This is very much the music that most of us associate with the word klezmer - the stirring Eastern European-flavoured dance tunes, the frequent use of modes and minor keys, the virtuoso instrumentalists, the strong bass rhythms, the 'laughing' clarinets.

We start with a track that sounds like a comedy sketch, with music interspersed between the gags.  I say "sounds like" because I'm making an assumption here - based partly on the fact that apart from the language (which I take to beYiddish, although I understand not one word) it sounds very similar in character to some records that were being made by Irish music hall turns - things like the Flanagan Brothers' In An Irishman's Shanty - around the same time, or a little later.  Most tracks, though, feature a large orchestra (up to nine musicians, says the notes) playing instrumental dance music.  The notes make the point that Schwartz's bands tended to play the tunes faster than other klezmer bands on record at that time, and ascribes this to the fact that his interpretations were "more American, less European in their treatment of tempo and instrumental texture", but it goes on to say that "in style and melodic phrasings (they) still sound much more European than most of the other klezmer ensembles recorded in America".  This is an interesting paradox that would require somebody with a more intimate knowledge of klezmer music than the present writer to do justice to it, but the notes provide no further insight.  All I can say is that some of Schwartz's records do offer an intriguing combination of elements that seem to have an ancient depth about them on the one hand, and on the other a kind of rhythmic abandon that at the time must have seemed very modern.  Some of these records, remember, would have been made at around the time that the Original Dixieland Jazz Band were the talk of the recording industry.  Braying trombones and whinnying clarinets were the hot ticket at the time.  Traditional musicans will have incorporated jazz elements either because they felt commercial pressure to do so, or because they simply wanted to - it's hardly surprising that any bandleader of the time will have felt the urge to add some of the excitement of the new sound to their own music - or, even, unconsciously.  The other side of this coin, though, is the question of the influence of klezmer music on the development of jazz, and other American music.  There's a thesis to be written there, if there isn't one already, but this review isn't the place to get into it.

On some tracks, the focus is on Schwartz himself, as an instrumental soloist, accompanied by his daughter Sylvia in piano.  The showcase for Schwartz's skills here is the wonderful two-part title track - he plays fast, he plays slow; he plays it straight, he plays with dazzling ornamentation; he plays melody, he improvises; he plays strong rhythms, he plays without rhythm.  It is an extraordinary performance that mixes passages of bewlidering virtuosity with others of great, poignant beauty.  The instrumental solo tracks are grouped together at the end of this selection.  The orchestra also accompanied other musicians, like Dave Tarras or Philip Greenberg, it tells us in the notes, but there doesn't seem to be any examples of this included here.

Another Jewish immigrant to the USA was Victoria Hazan, who had been born and grew up in the Turkish city of Smyrna.  Schwartz was already a well established recording artist by the time Hazan arrived in the US in 1920, but she seems to have been in no hurry to do likewise. 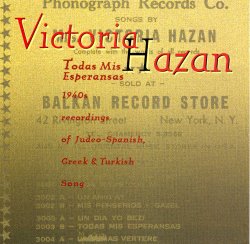 It appears, in fact, that she had been resident in America and performing regularly for the Turkish-Sephardic community for over 20 years before she paid her first visit to the recording studio, some time in the 1940s.  Reading this after having listened to the music caused a slight shock, as my initial impressions were that these recordings must have been earlier than that, for these are much more archaic sounds than we might have expected to hear from 1940s recordings, even for the 'ethnic' market.  A kanoun (a type of zither), an oud and a violin (or occasionally a clarinet) accompany Hazan's highly idiomatic vocals.  Names of accompanists mentioned in the notes include Nick Doneff and Wishan Sedefchian on violin, Malko Malkon Alemsherian on oud, Theo Kappas and Garbis Bakiorjan on kanoun, and John Pappas on clarinet.  Occasionally, some percussion can also be heard in the background, and an unidentified male voice takes the lead on Martinim Omuzumda.

The overall sound sometimes reminds me of early recordings of Greek music, the 'Cafe Aman' style that was prevalent before the bouzouki swept all before it in the 1930s.  Greek is certainly an ingredient here, although the reason for the similar sound is presumably as much that both stem from similar roots.  Several songs are described as gazels - an idiom that originated in the Arabic world.  These - Mis Penserios Gazel is one fine example - find Hazan singing in a highly ornamented, melismatic style.  On No Ay Luz, the kanoun provides a short introduction, then the vocals come in unaccompanied, with much rubato, and a solo violin provides an instrumental break.  The effect is of a haunting purity, and exceptionally beautiful.

Other songs are more rhythmically conventional - Un Dia Yo Bizi is almost in waltz time, for example, while one is described as a tsifteteli, a form frequently found in rembetika.  On the other hand, there is nothing here that sounds like what we tend to think of as klezmer music as such.  Clearly, the different musics brought to the USA by Jewish immigrants from different parts of the Old World were as various as that of the countries they had left behind them.  Whatever the style, though, this is quite a voice - high pitched without being grating, and brilliantly controlled - and the overall effect is very impressive.

The notes to this CD are even more brief than on the Schwartz, but we are told that Victoria Hazan "... recorded in the languages of her former home: Judeo-Spanish (Ladino), Turkish and Greek."  It may be a sign of my ignorance, but this is the first time I've been aware that a Jewish variety of Spanish known as Ladino was (is?) spoken in Turkey.  A little more information, explaining this background, would have been helpful - or at least interesting, but it isn't forthcoming.  We are told, though, that (according to an interview with Victoria Hazan) for this reason, her records sold in other countries where there were 'Spanish-Oriental' communities, such as in South America.

The sound is generally fine.  Realistically, it's probably as good as we're going to get, given the age (and no doubt the rarity) of the original 78s from which they are derived, although its only fair to make the point for the benefit of potential purchasers to whom such reissues of vintage material might be a new venture, that it's a long way from high-fidelity.  The Victoria Hazan recordings, being much later, sound correspondingly much better than the Schwartz ones, some of which, after all, pre-date World War One.  The packaging on both CDs, however, is very rudimentary.  There's no booklet, just a single (and rather ill-fitting) square of card, one side of which is largely taken up with a list of Global Village's other releases, leaving only a small space for notes.  There are probably economic reasons for this rather scanty presentation, although it is regrettable - I, at least, feel that there is a strong need for further information, especially on the Victoria Hazan release.

Having had that carp, I can only make positive comments on these releases - for enabling us to hear Abe Scwartz in such detail (17 tracks on this second volume), and to hear Victoria Hazan at all (24 tracks, no less), Global Village are to be commended.  There can't be a huge market for this kind of music, which makes these releases all the more valuable.