Music of the Shakers 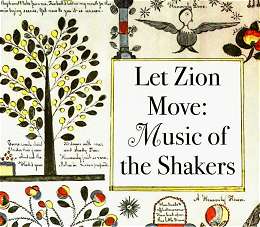 The origins of Shakerism are to be found in a small branch of radical English Quakers, who adopted the ritual practices of shaking, shouting, dancing, whirling, and singing in tongues.  Ann Lee, an illiterate textile worker from Manchester was converted to the "Shaking Quakers" in 1758, and in 1774 she came to America with eight disciples, to establish the millennial church in the New World.  It was "Mother Ann" who formulated the sect's doctrines, which included a strict adherence to celibacy.

Having settled at Niskeyuna, New York, the group swelled to several thousand converts within a few years, thanks to a religious revival movement that was sweeping the district at the time.  After Ann Lee's death, communal living became one of the distinctive features of the Shaker way of life.  The first Shaker community was established in 1787 at New Lebanon, New York; by 1826, 18 Shaker villages had been set up in eight states.  Membership of the Shaker sect reached its height during the 1840s, with some 6000 members.  Thereafter the Church went into steady decline: by 1874 the society was advertising for members, emphasising physical comfort as well as spiritual values; by 1905 there were only 1,000 members; and by the time these recordings were made between 1960 and 1980, only a few survivors remained.

Although perhaps better known today for their furniture design, music was an important part of the Shaker way of life - and as one of the Shaker contributors to this CD comments "I don't want to be remembered as a chair!"

This attractive package consists of two CDs and an eighty-page booklet.  The latter contains the full texts of all songs on the CDs, a brief history of Shaker music-making (including details of the various forms of musical notation used in Shaker publications), and a number of photographs and reprints of pages from Shaker hymnals.  The booklet and CD packaging feature distinctive original Shaker artwork.

The recordings on Disc 1 were made by Bill Randle in 1960, at the Shaker Community at Canterbury, New Hampshire.  This community numbered just eleven "sisters" by this date; they are joined on some tracks by Shaker historian Charles 'Bud' Thompson, who initiated the project.  The recordings were originally released in the United States as part of "The Shaker Heritage", a limited edition boxed set of ten LPs.  As well as Shaker songs and hymns, the CD includes spoken contributions from Sisters R.  Mildred Barker (born 1897) and Lillian Phelps (born 1876), giving some background to Shaker music in general, or to individual compositions.

What little I knew of Shaker music before listening to this collection, led me to expect songs of simple, perhaps austere beauty.  This might apply to some of the first songs on the CD "sung without benefit of instrumental accompaniment, as was the custom in the early days" (although several of these songs actually date only from the last quarter of the nineteenth century).  These are sung in unison, in a simple, unaffected, rather unemotional style.

After 1870 Shaker hymns were often written out and sung in four harmony parts, and/or accompanied.  None of the songs on this CD is sung in harmony, but several are accompanied by piano or organ.  The CD booklet emphasises the value of the fact that many of the Shaker spirituals performed here are from the later printed hymnals, which have tended to be ignored by studies of Shaker music.  Whilst not disputing the historical importance of the recordings, I have to confess that musically these accompanied pieces - and even more so the instrumental piano and organ duets - do absolutely nothing for me.  To be honest, they sound to me like typical late nineteenth century hymns, and don't even benefit from particularly spirited performance (perhaps not surprising in view of the great age of most of the performers).

Whether Shaker performances of seventy or a hundred years ago were more vibrant, I am in no position to say.  Certainly, in the early nineteenth century Shakers were famous for the dancing / marching which was a feature of their religious services.  This had been developed because it was felt all of one's faculties should be employed in praising God.  However the practice was discontinued as the Shaker population aged.  Similarly, the introduction of accompaniments to hymns came about because it was felt necessary to bolster the sound, in particular to compensate for the increasing lack of male voices.  (Although on these recordings the only instruments we hear are organ and piano, there are pictures in the booklet of a 1930s Shaker band featuring violin, cello and a horn section of trumpet and saxophones - it is intriguing to imagine what this sounded like!)

The second disc in this set is given over mainly to a spoken commentary on Shaker music and the Shaker lifestyle, with some musical examples.  The interviews feature Sister Mildred Barker (of Sabbathday, Maine), Eldress Bertha Lindsay and Sister Lillian Phelps (Canterbury, New Hampshire) - recorded either in 1960 by Bill Randle, or by Roger Hall in 1972 and 1980).  Sister Lillian's history of Shaker music, read from her own handwritten text, comes across as somewhat stilted.  But Sister Mildred's account of how she came to join the Sabbathday Shakers, and what life was like in an early twentieth century Shaker community, is far more natural, spontaneous and lively.  The importance of Shaker religious beliefs in her everyday life also comes across very clearly in Sister Mildred's testimony.

As a document of an important American religious musical tradition, this CD set can only be welcomed.  As a fan of other American singing traditions such as Sacred Harp and Gospel, I am certainly glad to have had the opportunity to hear the Shakers' music.  But whereas I will listen to Alan Lomax's recordings from Alabama, Virginia and Kentucky purely for pleasure, I doubt whether these discs will be returning to my CD player very often.