I tried to stay away from this, I really did.  You see, I have little enthusiasm for sea shanties, and regard their performance - by non-rope hauling revivalists at any rate - as one of the most fatuous exercises ever devised by the human race.  Unfortunately, though, we at Musical Traditions carry one continuing flaw. 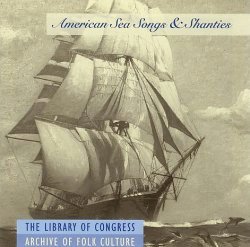 We can't get the experts.  True, there is no end of churls and complainers to carp and criticise at the diligence of others.  But we can't assemble enough people with enough intelligence and enough specialist knowledge, who are prepared to put the work in and produce the copy.  Yet the breeding will break through the eyes of the cat, to quote a much favoured maxim.  So, sean nós or sea shanty, it's the usual gesture to the poolside piranhas, and all hands to the pump for the dedicated few who keep this craft afloat.

That gripe out of the way, what did this landlocked landlubber make of this package?  Well, the first good news is that these singers are no revivalists.  They are all retired sailors, who shantied aboard ship in the hey day of sail, and were captured on disc by collectors working for the Library of Congress.  This CD is in fact, one of the series of reissues of Library of Congress LPs, which Rounder have been diligently bringing us.  Moreover, it is unique.  This the only album, in English at any rate, which has ever been composed entirely of authentic shanty singers from the hey day of sail.

The second good news is that, where most of the discs in this series are reissues of single LPs, this one combines LPs AFS L26 and L27, giving a total of 73'51" playing time.

As with the other reissues, the booklet notes are a straight republication of the originals, albeit highlighted by various illustrations and photographs.  They are the work of Duncan B Emrich, then head of the Library of Congress Archive of Folk Song, who also edited the discs.  In conformity with others in the series, the title emphasises the American provenance of this material, and in this case it is slightly misleading.  As the world nowadays knows, shanties are too ubiquitous to be delineated by national boundaries, and pretty well all the ones here were sung wherever the idiom was practised.  But if the titles and tunes are well known, several of the texts are less common.  In particular, the version here of Reuben Ranzo makes a refreshing change to the one we've known all these years, as does one of the disc's two versions of Blow The Man Down.

Emrich presents a thorough and authoritative discourse on the art and functions of shantying, although for some reason he conflates the number of types of sea shanty down to three.  That curiosity apart, I find his knowledge of the subject surprising.  You see, Emrich always seemed to me to have neither published enough material of serious academic merit, or got his hands dirty in the field often enough, to justify his position at the Library of Congress.  If so, this is one instance where the authority of the armchair scholar outstripped the field collector.  The following exchange is between Alan Lomax and Dick Maitland, and it follows Maitland's singing of the capstan shanty, Paddy Get Back.

M:  Now this song ... I forgot to explain it in the first place ... it commences ...  The solo is sung by the shantyman sitting on the capstan head, where he always does sing ... sit in case of singing shanties.  The shantyman sits there and does nothing, while the crew, walking around the capstan, are singing.  The chorus begins at:

Paddy, get back, take in the slack,
Heave away the capstan, heave a pawl, heave a pawl,
'Bout ship and stations there be handy,
Rise, tacks and sheets and mainsail, haul!

L:  That's where they pull?

M:  There's no pull in a capstan shanty!  They're walking around the capstan with the bars!

Incidentally, whilst that piece of conversation is transcribed in the booklet, several other bits of actuality are not.

The downside of straightforward re-publication of course is that the notes, written in 1952, are representative of their time and age, not of ours.  One result of this is there is not one biographical word on any of the singers.  That left me with a lot of mental loose ends untied.  For instance, how on earth did New York born

1 'Captain Dick' Maitland acquire that extraordinary brogue? Equally, the lack of background detail left me wondering what the Sailor's Snug Harbour was.  If, as seems likely, it was a rest home for retired mariners, what was someone of the rank of Captain doing in there? Was his title purely a nickname?

Another problem with time and age, lies in the fact that these shanties are devoid of anything even remotely risqué.  Normally, one would lay accusations of censorship at the doors of the collectors, or the Library of Congress.  However, this couplet, from Paddy Doyle suggests that the singers themselves may have bowdlerised their recordings:

For the life of me, I cannot imagine some ring tailed roarer, hanging on to the sail for dear life, whilst being pitched back and forth, thirty feet or so above the deck, singing an innocuous word like dung.

The record's title is also slightly misleading, in that there are only two forebitters

2.  One of these is Captain Richard Leighton's routine rendering of The Sailor's Alphabet. The other is a superbly hyperbolic Jones's Ale from 'Sailor Dad' Hunt.  If you've become cheesed off with festival goers, stretching out land versions of this song until you think it will snap, you will find this a welcome change.

The biggest difficulty I had with this disc though is that the singing is so damned dull!  To a large extent, that is because the shanties are sung at a normal working pace, which is a lot slower than we are used to hearing them

3.  Also, they are purely demonstrations, which were sung away from the workstation, and tracks 1 to 16 are sung without the benefit of a chorus.  The remaining six were recorded in 1939 by Mrs Sidney Robertson Cowell, although there is a small question mark hanging over their veracity.  They are of Captain Leighton Robinson singing with a trio of individuals, who do not look as though they ever sang these choruses at sea.  Finally, the ages of the singers has to be taken into account.  That is a factor undoubtedly.  Yet there is little of the panache which hallmarked lively old salts like Sam Larner or Bob Hart, or even Stan Hugill.  Moreover, I have worked with a lot of ex-seamen who, one and all, liked nothing better than reliving their days at sea.  I can therefore only express surprise at the general lack of gusto.

Though it galls me to say it, I find sea shanties textually and melodically much less impressive than those handsome jewels of Gaelic tradition, Hebridean work songs; or for that matter those fiery Negro prison songs of the Southern USA.  Even so, this record makes a fine piece of history, and we should welcome its release on those grounds at least.  As for me, if ever I go to sea again, be God, I'll take the train.

1.  Emrich does not say where Maitland was born.  However, William Doerflinger (Songs of the Sailor and Lumberman.  Macmillan, New York, 1972) identifies him as having been born in New York's 'Bloody Fourth Ward'.

2.  Three, if one counts Rolling Home.  However, Emrich's notes highlight this song's significance as a farewell shanty.

3.  Dissenters from the view that shanties were necessarily sung at a funereal pace, might take heart from Folkways Records - FW 37301, Salt Atlantic Chanties.  This disc features the crew of the sail training ship Unicorn working under actual sailing conditions and their singing is both zealous and lively.  I have no intention of entering into a debate which would need to recognise that the Unicorn crew were probably fitter and younger, and certainly better fed, better clothed, better equipped and more highly motivated than their nineteenth century forebears.  All I'll say is that I find their singing enjoyable and convincing.