Mississippi: The Blues Lineage: Musical Geniuses of the Fields, Levees and Jukes

Mississippi: Saints & Sinners: From Before the Blues and Gospel

These two CDs are part of the Deep River of Song subset of Rounder’s Alan Lomax Collection series, and are drawn from field recordings made for the Library of Congress between 1936 and 1942, mostly by Alan and John A.  Lomax (which Oedipal ordering of names Alan Lomax seems to insist upon). 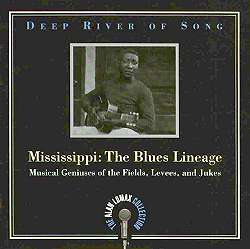 The Blues Lineage draws largely on recordings made during the 1941/2 Coahoma County Project, which David Evans rightly describes in his notes as an ambitious attempt to document "African-American culture, living conditions and social change in a Mississippi Delta County".  It was a risky time to be carrying out such a survey, for even before Pearl Harbor, war preparations had led to an acute shortage of manpower on the plantations, and the local white paranoia, finding its usual outlets in racial oppression and distrust of outsiders, found it easy to suspect that the researchers were (according to choice) Communists, union organisers, German spies or just that good old standby, ‘race mixers’.  Many of the recordings which resulted from these field trips were remarkably important, both artistically and in their historical consequences, and the sessions by Muddy Waters and Son House have been extensively issued and reissued; Alan Lomax has observed that blues fans and historians seem to know more about the circumstances in which he recorded Waters than he does.

It will not come as a surprise, therefore, that of the disc’s 16 tracks, only three are seeing issue for the first time, the others - by William Brown, Muddy Waters, Son House, Honeyboy Edwards, Lucious Curtis and Willie Ford - having been variously issued on American and British LPs and CDs.  I do not intend, however, to review The Blues Lineage in terms of duplication with previous issues, for this is one CD where - if you can possibly afford it - the duplications simply don’t matter.  It is an impeccably compiled and superbly remastered selection from some of the greatest blues sessions ever recorded.  Not only that, David Evans has had access, in writing his exemplary notes, to Alan Lomax’s 1941 field diaries, and to other material in the Lomax archives; the importance of this access may be seen from the following, probably written by John W Work:

Playing for a white dance at the Stovall plantation on the nineteenth of June 1943, his band used the following pieces: Corinna, St.  Louis Blues, Jingle, Jangle, Jingle, Missouri Waltz, Darktown Strutters Ball, Darkness on the Delta, and Wang Wang Blues.

The reference to Stovall’s gives it away, of course; this, improbably enough, is the string band led by Muddy Water (as Work consistently calls him), the man who was convinced that he could make it in the music business by the reaction when he put his Library of Congress recordings on the local juke box, and shortly went north to change the face of the blues, and then of popular music, forever.  Oh to have one of those performances to put on a sound clip!  As it is, I surely don’t need to play examples of the music of Muddy, or of his mentor, Son House, in the course of this review;

any reader who is unaware of them is simply urged to become aware without delay.  Instead, here is a clip from Mississippi Blues, by William Brown, who never recorded before or after 16 July 1942 (sound clip).  And yes, the two guitar lines in the treble, and the one in the bass, are all being played by Brown alone.

The notes about Brown’s two songs include a lengthy extract from Alan Lomax’s diary; its account of being run off Beale Street by white cops, and crossing the Mississippi to record in an Arkansas juke joint, evidently served as an aide-memoire for Lomax’s longer, and much more highly wrought, account in Land Where the Blues Began.  If there is any doubt that Alan Lomax sees the world as a novel of which he is the hero, a comparison between these two versions should eradicate it; and even in his diary, he’s still drafting the novel, referring to going over the Mississippi as ‘crossing the dark river of sorrow.’ On the other hand, if you’ve achieved what Lomax has in folk music research and recording, you’re probably entitled to be the possessor of an ego that needs to be transported in a separate car.  So entitled too, despite Oedipus, was John A.  Lomax, who recorded Early in the Morning,

a freely melismatic meditation on one verse of The Midnight Special which was the only song obtained from Parchman inmate Hollis ‘Fat Head’ Washington in May 1939 (sound clip).  And, despite what was said above about it not being necessary, let’s end consideration of this CD with a sound clip of Son House.  It’s often been said, and with more justification than is often the case with such comparisons, that House’s performances were instances of possession by a vodun spirit called the blues.  County Farm Blues (based on Blind Lemon Jefferson’s See That My Grave Is Kept Clean) is all of that, but it’s also simultaneously an introspective meditation on his personal experience of the Southern prison system, and a remarkably explicit statement,

for its time and place, of what any black subject of that system was likely to have to undergo in those days.  Consider how and with what Captain Jack will ‘write his name up and down your back’, and be grateful that all you have to do is empathise (sound clip).

If The Blues Lineage is magnificent but seldom surprising, Saints & Sinners is both magnificent and frequently surprising, although that judgment does not apply to its whiskery old cliché of a title, which is not only simplistic in the extreme, but bears the additional blemish of inaccuracy. 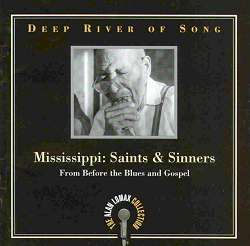 The Saints who famously go marching in are members of the Sanctified churches, but the ‘Christian friends’ who are heard on the last 29 or so minutes of the CD’s 74’ 41” were members of the Mount Ararat Missionary Baptist Church.  The session from which these titles are drawn was specially set up by Alan Lomax (as part of the Coahoma County project), in order for Rev C H Savage and some of the congregation to recreate the songs they had learned as youngsters from their parents and grandparents.  As such, it’s an invaluable documentation of the shout tradition, better known from recordings made in the Sea Islands and McIntosh County, Georgia.  The hypnotic call and response of ‘Rock Daniel’ and the other shout songs is admirably contextualised by Lomax’s sensitive interviewing of Rev Savage, who describes the slavery time practice of singing into pots to muffle the sound of forbidden religious practices, and comes as near as he dares to admitting that African-Americans in 1940 were still coping with oppression by ‘singing off their troubles,’ like their enslaved ancestors.

The success of this session is a reminder that it’s necessary, when approaching fieldwork, to have a plan, an agenda, and a set of hypotheses to be tested and confirmed or rejected in the light of what informants do and say.  On some tracks of Saints & Sinners, folklorists’ agendas can be seen bumping up against obstinate reality: John Lomax, pursuing his conviction that informants (especially black ones) needed editorial assistance, instructs Big Charlie Butler to Talk to your horse.  Talk to your mule.  Go ahead.  Sing at ‘em, the result of which is that Butler pauses, repeats the verse which he’s just sung, and stops.

That Charlie Butler did not need this kind of ‘encouragement’ is emphatically shown by his moving, enigmatic, perfectly weighted performance on his other title, the strange and mysterious Diamond Joe (sound clip).  Elsewhere, Herbert Halpert tries his damnedest to get Joe Shores, an appropriately named river pilot, to sing out ‘Mark twain’, which to Halpert is a cute literary allusion; but since to Shores it’s just another sounding call, Halpert gets no joy.  As a final example of reality subverting agenda setting, consider Alan Lomax’s decision to interview Thomas ‘Jaybird’ Jones while Jones was playing the piano.  I have always found this a perverse and irritating approach, and still do; the reason (and I’m indebted to Howard Rye for pointing it out) is evidently that Lomax was hoping Jaybird would be a rural raconteur to set alongside Jelly Roll Morton, whom Lomax had recently recorded at length.  There’s a certain schadenfreude in noting that Jones turned out to be a notably laconic respondent to questions!

That said, rural piano players were rarely enough recorded that we still have cause to treasure Jones’s performance of Walking Billy.  There is plenty more rare and unusual material included, too, such as Sid Hemphill’s band (fiddle, guitar, banjo and bass drum) performing Hog Hunt, a tremendously accelerating variant on the Fox Chase.

And speaking of foxes and foxhounds, how about this, which Will Starks learned from his father, for improbability (sound clip)? Other highlights of Saints & Sinners include the curling melisma of Jim Henry’s field hollers, sounding much more ornate and decorated than one would think possible in four and five note scales; the bucket beating that ‘Scrap Iron’ (a nickname noted by John Lomax, almost certainly mistakenly, as ‘Crap Eye’) employed to rap the boys up at Camp 3 every morning at Parchman, Mississippi; and Sid Hemphill’s playing, at once muscular and ethereal, of Emmaline, Take Your Time on the four hole quills.  Above all, perhaps, there’s the singing of Dobie Red, considered by his fellow inmates, and by John Lomax, to be the finest singer in Parchman in 1936.

Red was recorded again by Alan Lomax in 1948, but was in sadly diminished voice; here he is in his glory, leading a gang of eight (!) men on Rosie, which the Lomaxes held to be the ‘big song’ of the Mississippi prisons (sound clip).  There are also a number of guitar-accompanied performances; Lucious Curtis and Willie Ford turn up again, with songs from the ballad and minstrel traditions, and Frank Evans, also heard on The Blues Lineage, represents the transition to blues with a mistitled French (ie Frank’s) Blues.  Even after years of studying and listening to this music, it’s astonishing to me that the contents of Saints & Sinners could have been collected in such a restricted geographical and temporal catchment area; this is not a CD that should be missed by anyone who wants properly to explore and understand the richness and variety of African-American music.