More than most places on Earth, Hawaii (or Hawai’i) exists as an idea almost as much as a physical location.  The title of Robert Mugge’s film Hawaiian Rainbow expresses one of them - Hawaii as multicultural melting pot - and the guitar could be said to symbolise that; whether steel or slack key, it’s the iconic Hawaiian instrument, with sounds and playing techniques that were invented in, and instantly say, ‘Hawaii,’ and like the ukulele, the other quintessentially Hawaiian instrument, it was imported - the guitar by Mexican and Spanish cowboys, the uke from Portugal.  Whether Hawaii really is the land of multiracial harmony is another matter.  It was, I think, in Hawaiian Rainbow that somebody sang (to a reggae rhythm - how I love cheap irony!) Who was here first?  Of course, we kanakas.  If ever the music business doesn’t work out, that man has a promising career as a London taxi driver.  (‘They come over ‘ere, take our jobs…’)

Another idea of Hawaii envisions a prelapsarian paradise where ‘noble savages’ practised a sexual freedom that was curtailed by Christian repression and venereal disease; there may be something in this, although one notes that many guitarists are enthusiastic players of himeni (hymns) alongside the songs that have a kaona (hidden meaning) - as when He’eia (on Dennis Kamakahi’s CD) praises King David Kalakaua’s surfing abilities while simultaneously alluding to a different kind of motion.  And, of course, there’s the idea - also Edenic - of Hawaii as a stunning landscape, seascape and natural paradise of flora and fauna.  This one is very popular among ecological sentimentalists, and has been the incentive for the mass tourism that became possible in the age of the jumbo jet; it’s also clearly very important to the self-image of Hawaiians, as the lyrics of so many of the songs on these CDs bear out.  As a result of that mass tourism, Hawaii may be the best example of a place where, in Joni Mitchell’s words, They paved paradise, and put up a parking lot, but that doesn’t invalidate the importance to Hawaiians of the idea of their homeland as a privileged place of beauty.

And, just as Hawaii-the-place has been incorporated into the outside world’s psyche and self-image, so Hawaiian music was co-opted early on.  The Hawaiian guitar (ie the acoustic steel guitar) became a craze in the early years of the century, and its sound was used to accompany a great deal of trash, whether sentimental (like Sweet Leilani, which won the first Oscar for best song) or humorously sexist and racist (of the My Little Bimbo Down on the Bamboo Isle, grass skirts, hula and nudge-nudge variety).  The ukulele, too, became a vital part of the doo-wacka-doo soundtrack of the Roaring Twenties.  On the upside, the acoustic steel was successfully blended with the hot syncopations of jazz to stunning effect by Sol Hoopi’i, King Benny Nawahi and others, and was used by Kalama’s quartet to accompany some of the most deeply soulful, and authentically Hawaiian, harmony singing ever recorded.  By the mid-thirties, the acoustic instrument had been almost entirely replaced by the electric steel guitar, to the point where today’s leading exponent of acoustic steel playing, Bob Brozman, although steeped in Hawaiian culture, was not born into it.

All of which is by way of preamble to the observation that slack key guitar music seems to be important to its practitioners because it’s a distinctively and unmistakably Hawaiian mode of musical expression.  Certainly most of the practitioners on these two CDs seem to be acutely aware of their place as the heirs of tradition, and of the importance of their predecessors as players and composers.  Dennis Kamakahi aims to include an unreleased song by Queen Lili’uokalani (author of Aloha ‘Oe) on each of his albums, for instance.  (It’s therefore a matter of particular regret for a British reviewer that ‘Ike Ia Ladana, which is about a trip to London (Ladana) to meet her royal counterpart, Victoria, should be the only disappointing track on ‘Ohana!) Lyrically, the slack key guitarists are very much preoccupied with praising the beauties (natural and female) of Hawaii, often using one as a metaphor for the other.  The historical development of slack key has been driven by the invention of new and unusual tunings, often to fit with an individual player’s vocal range, and this also seems to be part of the notion of slack key as specially and esoterically Hawaiian; tunings are often named after their inventors, or given names like ‘C Mauna Loa’ or ‘G Major Taro Patch.’

At the same time, inevitably, there’s also an opening up to the wider world, as may be seen most obviously in the fact that Dancing Cat Records is marketed the Windham Hill group, notable mostly for its unchallenging new age releases, and itself distributed by the multinational behemoth BMG.  Ledward Kaapana’s Radio Hula, on the sampler, was recorded in Nashville, and has percussion and accordion among other additional instruments.  Fortunately, they are so discreet as to make virtually no difference to the sound, but this sort of attempt to co-opt slack key into the world of global elevator music does not augur well. 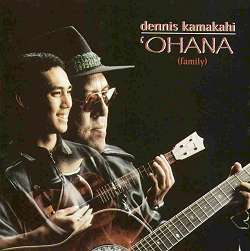 Something similar happens when the great Keola Beamer tries a new take on The Beauty of Mauna Kea; he incorporates highly traditional elements - nose flute and mele (chanting) - and yet it just becomes ambient bland-out, largely because of the English-language lyrics, which, whether original or translated from Hawaiian, are banal in the extreme.

Despite which grumpy remarks, it’s my pleasure to recommend Dennis Kamakahi’s CD as the work of an artist rightly described, in the notes to the sampler, as ‘one of Hawai’i’s greatest, most prolific and romantic songwriters in history.’

The best songs on the sampler are those by Mr Kamakahi, and here’s a clip from a title that appears on both discs.  (sound clip) ‘Ulili E ‘describes a tattler bird running along the shore of a calm deserted beach,’ and well illustrates Kamakahi’s guitar mastery and his resonant, soulful singing.  It also features his son David on ukulele and second vocals, and its combination of sonic beauty, rhythmic energy, and emotional commitment is emblematic of the virtues of the whole CD.  Even an arrangement of the theme music for Around the World in 80 Days as a lullaby works beautifully - and this is a song that went into the Top 40 in versions by Victor Young, Bing Crosby, and Mantovani!  Rather than a sound clip of that, however,

here’s a snatch of the more vigorous Ka ‘Opae, first recorded with the Sons of Hawaii in country style, but here given a rhythm described as South African. (sound clip)  An opae is a shrimp, but the song is about encountering ‘all these nude hippie women’ bathing in a stream in Moloka’i!  Again, it’s the combination of guitar and vocal mastery that marks Kamakahi out as a great musician, even on a light-hearted novelty such as this. 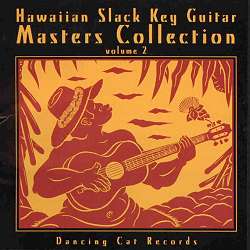 The sampler, as one might expect, is both more diverse and more uneven.  It seems to feature most of the masters of the genre - from Ray Kane, rightly described as ‘the elder statesman of slack key,’ to Gabby Pahinui’s sons Cyril and James (‘Bla’).

The late Sonny Chillingworth is represented by the beautiful Liloa’s Mele, written for a grandchild, which features (if it’s not a contradiction) spectacularly tasteful hammer-ons and pull-offs. (sound clip)  Beautiful though this and other tracks are, this CD does sometimes seem to lack edge, though; the technical mastery of the artists is not in doubt, and, paradoxically, that’s the problem.  It’s not often that there’s a sense that risks are being taken, or that all that technical ability is being used in the service of feeling and expression, rather than as an end in itself.

Needless to say, I except from this the tracks where Dennis Kamakahi appears, and Cyril Pahinui’s march Hurrah Lani Ha’a Ha’a certainly gets into some envelope-pushing improvisation. (sound clip)  But too often there seems a willingness to settle for comfortable gorgeousness; for instance, George Kahumoku’s version of Aloha ‘Oe is taken so slowly that one can scarcely recognise this best known of Hawaiian songs, and the wish to bid it aloha sets in well before the end of its six and a half minutes.  Here, though, is a remarkable exception, in the shape of the previously unreleased Ulu Niu Ke’eke ‘e (The Crooked Coconut Tree).

Again it’s a long performance, at 5’ 48”, and again the guitarist ( also overdubbing second guitar and mouth bow ) is George Kahumoku, but it’s the singing of Kehuni Kanahele, who also plays ‘ili’ili (percussion stones) that rivets the attention, and proves that beauty alone is sometimes not enough.  (sound clip)