Book and CD by Rob Amberg

When I first visited Madison County, NC, in 1980, I tried to change some travellers cheques at a bank in the town of Marshall.  I wanted to get $200, but the bank refused, saying that they did not know me.  At this point a person who I had met briefly the previous day stepped forward and said that he would guarantee my cheque.  As we left the bank together my new-found friend stopped, shook his head, and said, "Hell, I doubt if I’ve even got $200 in my account to cover your cheque!"  That person turned out to be Rob Amberg, a photographer who had a studio in Marshall.  Later that day I spent some time with Rob and bought two of his pictures, one of Doug Wallin playing his fiddle at his home, and one of Zipo Rice, a centenarian who had sung a version of Lord Bateman to Cecil Sharp in 1916.  Rob told me that he had first encountered the Sodom Laurel singers when he had been introduced to Dellie Norton by one of her younger relatives.  Over the years Rob and Dellie developed a friendship (she got to calling him Rob Hamburger!), and they had often talked about producing a book about Dellie’s life. 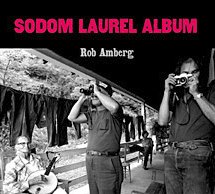 Dellie died in 1993, just weeks before her 95th birthday, and it looked as though the projected book would never appear.  But, not all news is bad these days, and Rob’s wonderful book, Sodom Laurel Album, is now with us.

Most readers will know that Cecil Sharp & Maud Karpeles collected a wealth of songs in Madison County, NC, during the summer of 1916, and that Dellie Norton and her relatives and neighbours were descended from the people who had sung to Sharp.  But, following Sharp’s departure, very few ‘outsiders’ visited Sodom Laurel.  True, collectors like Alan Lomax and John Cohen paid the odd visit to collect from Dellie, her sister Berzilla, Berzilla’s son Doug Wallin, or Doug’s uncle, Cas Wallin.  But, until recently, Sodom Laurel remained almost unknown to most Americans.  And this is one reason why Rob’s book is so important, for here we have a record of a world that had all but vanished elsewhere, one told in Dellie’s own words and in Rob’s splendid photographs.  There is no sentimentality here, only truthful words and truthful images.

Rob Amberg is an extremely talented photographer and the book’s photographs are printed in a chronological sequence, one of the first shots being of Dellie’s home taken in winter.  Boy, did it bring back memories for me.  On the left was the verandah where I often sat with Dellie (the cover picture to Crazy About a Song was taken there) and every page seemed to show places that I had visited.  I especially remember Dellie telling me about one field, shown on page 12, that was the home of a number of ‘haints’, though I never did quite work out the difference between a ‘haint’ and a ‘ghost’, despite Dellie’s best efforts at explanation.  There are pictures of Dellie and her adopted son Junior working the tobacco fields, pictures of Dellie and Berzilla singing at an open-air festival, and pictures of the neighbours and the surrounding area.  Many local singers are shown, Cas Wallin and his wife Virgie, who sang The Grey Cock to me.  Doug Wallin playing his fiddle, Doug’s mother, Berzilla holding a family photograph with pride, and Inez Chandler from nearby Marshall who sang me all kinds of nonsense songs.  It was only years later, when I was back in England, that I discovered that Inez had also sung a beautiful version of The Cherry Tree Carol.  Zipo Rice is here too, providing a direct link with Sharp and Karpeles.  The book concludes with a handful of pictures taken during Dellie’s last few months.  One picture, taken from behind as Dellie is using a zimmer-frame to get through a doorway, is extremely moving - but then, so are so many of the other photographs.

The book also comes with a CD featuring many of the people seen in the pictures.  Cas Wallin kicks off with Pretty Saro and Fine Sally (The Brown Girl), which he sang on the old Folkways LP Songs and Ballads from the Big Laurel.  He also sings a version of The Black Sheep which was previously printed in the book Stay With Us - Visiting with Old-time Singers and Storytellers in the Southern Mountains (Paideia.  1979) and Conversation with Death (Oh Death) that was recorded by John Cohen from Cas’s neighbour Lloyd Chandler (Rounder CD High Atmosphere - CD 0028).  We can compare the younger singer Sheila Kay Adams with Cas, because her version of Pretty Fair Miss comes from Cas, who can be heard singing the song on Far in the Mountains - vols 3 & 4 (Musical Traditions MTCD 323-4).  I would dearly love to know whether or not Ms Adams is deliberately copying Cas with her pronunciation of ‘prehaps’ (rather than ‘perhaps’) or has she picked this up without realization.

Dellie Norton herself can be heard in a long, and valuable, interview with Allen Tullos.  She then sings versions of Young Emily (a version of which is also included on High Atmosphere), A Soldier Travelling from the North (which Dillard Chandler sang on the Folkways LP), the sentimental The Dying Boy and Little Mohee (a similar version to one that I recorded from Doug Wallin).  Sadly, some of these recordings suffer from excessive ‘print through’, causing a ‘ghosting’ effect that can be somewhat off-putting.  Berzilla Wallin sings versions of The Drunkard Song and If I Had the Wings of an Angel.  Doug Wallin provides some of the best singing with his Pretty Peggy-O, Little Sadie, Little Margaret, Dearest Dear and Shady Grove.  Pretty Peggy-O is as fine a version as could be wished for, though Doug’s hesitation in saying where he got the song from could suggest that he picked it up from outside the Sodom Laurel community.  Little Margaret is similar to the version that I recorded from Evelyn Ramsey and which can be heard on Far in the Mountains, vols 1 & 2 (Musical Traditions MTCD 321-2).  I especially like Doug’s opening line with its reference to ‘the dowry hall’, a phrase that is new to me.  Shady Grove uses a melody that is extremely close to that used for Little Margaret and makes me think that this could be the origin of the Shady Grove tune.  Incidentally, some of Doug’s verses for Shady Grove were used by Dellie in her version of the song Little Betty Ann.

Evelyn Ramsey’s set of Black is the Colour differs somewhat from the version that I recorded from Dellie.  There is, for example, no mention of the River Clyde, that appeared in Dellie’s fine version.  Evelyn also appears on the closing track, along with Cas and Edison Ramsey, singing the religious Moving Over Jordan.  At one time Cas used to lead the singing in his local church and this is the only example that I have heard of him singing such songs with other singers.

I know that I am closely linked to many of the people seen and heard in Rob Amber’s Sodom Laurel Album, so, perhaps I’m not the best person to give an objective overview of the book and CD.  Then again, I do know how hard it could be for somebody from outside the region to evaluate just what it is that Rob Amberg has achieved here.  So, if you bought, and liked, the four volumes of Far in the Mountains, I know that you will love this book.  If you haven’t yet heard Far in the Mountains, but would like to know more about the people of the Southern Appalachians, then, again, this book is for you.  Who knows?  It might also make you rush out to buy Far in the Mountains as well!