From what I’ve seen of them, Acrobat appear to be yet another bargain basement blues reissue company; the kind of cheapo label 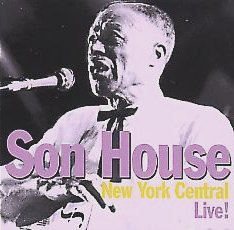 whose products would not normally be considered collectable by the serious blues reissue collector.

That, I must emphasise, is only an impression, and one formed solely from perusing some of their releases.  I cannot find a website belonging to Acrobat, and I have yet to see a catalogue which bears their name.  Even so, blues fans will definitely want to look at this new super-budget release of theirs.  At least you will if you haven’t got the material already.  It features Son House in concert at Oberlin College in 1965, the day after he completed his seminal Father of Folk Blues LP for Columbia.

The Oberlin set has previously been available on several other labels, although this one does appear to have a significant cost advantage.  Moreover, the contiguity of concert and recording session means that there is considerable overlap between the programme on this disc and the one on Columbia; although there are various track title differences between the two.  Also, while several tracks here are actually shorter than the Columbia versions, Preachin’ Blues exceeds the one on Columbia by nearly three minutes.  It is a tour de force which loses absolutely nothing in the extended retelling, and it is followed immediately by a haranguing ten minute version of Change Your Mind.

And then there’s Son House.  If I was trying to show a maiden aunt the way into the blues, I wouldn’t start from here.  House’s vocals are hoarse and twisted and tormented and his guitar playing, never more than rudimentary, is often downright clumsy.  Yet he is as awesome as he is unreconstructed.  Like certain Southern Appalachian singers - Roscoe Holcomb is an obvious example, but so are Nimrod Workman and Dock Boggs - it is the sheer austerity of the singing which compels the listener.  Son House was a tough musical adversary.

Listening to the man was like listening to the life story of every Negro in the Mississippi Delta; levee camps, one room shacks, a poverty-ridden sharecrop economy, and an indestructible caste system which kept the Black population at the bottom of the pile, just as surely as it kept Mr Charlie at the top.  But Son House was not just a spokesman for the Delta.  He was also a component in a chain of influence which stretches from Charley Patton to Robert Johnson to Howlin’ Wolf to The Rolling Stones.  In the history of popular music, his legacy looms very large indeed.

Of course you get what you pay for, which means that the booklet notes are extremely brief, the tracks are wrongly numbered, and the whole disc - spoken intro and all - lasts for just over thirty eight minutes.  Yet this release is not just for completists and bargain hunters.  It is for everyone who is moved by the music of Son House.  It is for everyone who was ever touched by the African-American experience in African-America.