A History of the New Wave of English Country Dance Music

So here it is, Topic's re-issue of the fRoots (nťe Folk Roots) 1988 album Tap Roots, now with extra bits. 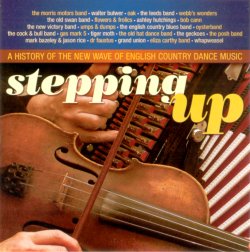 Tracing what has happened to English country dance music in the hands of the post-war generation, or at least, the hands of those who got to play at festivals and were lucky enough to make recordings.

So who gets up to what?  Well it kicks off in surprising style with The Morris Motor Works Band playing Speed the Plough, as arranged by Imogen Holst in 1933.  Then follows Walter and Daisy Bulwer with Billy Cooper.  Two more disparate bands you couldn't wish for, the glory of a full brass band and then melodeon, dulcimer, piano and snare drum.  But the style is the same, bouncy and that strong off beat.  English music.

Off into the world of the so-called revivalist bands.  Oak, The Leeds Band, Webs Wonders, The Old Swan Band, Flowers and Frolics, The New Victory Band, and Umps and Dumps.  Very much a traditional feel about them, echoes of the Bulwers, Scan Tester, Oscar Woods, Billy Bennington et al.  Vital and vibrant, unashamedly good time music.  I defy toes not to tap.

Now a track from the Ashley Hutchings album, Kicking Up The Sawdust, which features Bob Cann on melodeon and Jimmy Cooper on hammered dulcimer with bass, drums and guitar backing.  Jimmy and Bob's playing is very percussive and they're both doing what English musicians do - they stretch the tune about.  The result is a rather tense juxtaposition of a strict 4:4 backing with fluid and expressive melody instruments.

Still, onwards and upwards.  It's the 1980's.  Now we are in to the meat or, more probably, the tapas and a mineral water of the 'New Wave' with tracks from The English Country Blues Band, Oysterband, The Cock and Bull Band, Gas Mark 5 and Tiger Moth.  The styles really began to diverge, from the still discernable lumpiness of Oysters, ECBB and especially Gas Mark 5 to the lounge lizard smoothness of Cock and Bull and the 'Lets get African' of Tiger Moth.  It was a time of experimentation with other rhythms and instrumentation.  There was also a marked increase in flights of improvisation, or falling off the tune Ö

Well that's where the old album ended and so what has happened since 1988?  Backlash.  The Old Hat Dance Band, The Geckoes, The Posh Band, Mark Bazeley and Jason Rice (more correctly this track is by the band Moor Music including, as it does, Rob Murch on banjo and Gareth Kiddier on piano) Grand Union, Dr Faustus and The Eliza Carthy Band.  The tune is again at the forefront and dictating the rhythm, rather than just a springboard for improvisation and what improvisation there is restricted to ornamentation.  There is also, ably demonstrated by Dr Faustus and the Eliza Carthy Band, the use of dynamics i.e. playing softly and loudly.  It's a much under-used trick and if properly handled can make the dancers go nuts which, after all, is the job in hand.

And then we get to Whapweasel.  A phenomenon.  More off beat than the North London Nutty Boys, these geezers are making dancers go bonkers up and down the land, which is nice.  Improvisational and tantric would best describe them, but English Country Dance?  Hmmm Ö

So there we are.  English dance music.  Musically in-your-face and lumpy as a mattress full of coconuts.  When at its best, the experience is not so much dancing to it, as being booted round the dance floor by it.

Highlights?  For my money it's Ken Lees's banjo, The Leeds Band and Watson's Hornpipe.

Any gripes about the album?  Well as a history it's far from exhaustive.  Style wise, with a few exceptions, it's got a very strong Southern flavour.  Nothing at all of the North East.  Where are Joe Hutton, Willy Taylor, Will Atkinson, the High Level Ranters, Cheviot Ranters or Red Shift?  Still, I don't suppose it's the first time the North has heard reference to England when what is meant is the area below the line from Gloucestershire to the Wash.

That being said it's a good album, as a source of tunes, style and names to seek out for those wishing to dig further.  Full album details of the source of each track are helpful, especially for those no longer available.  Lots of eBay searching to be done.

On the whole it made me think of sunshine, canvas marquees and the smell of crushed grass.  It's like a blinking good dance festival.  You come away having enjoyed these 23 bands and wishing that you'd had time to see all the others.  Maybe next year Ö