I suppose it's inevitable that, given enough time, most lifelong musicians will make up a tune or two along the way.  And even after the ones they thought they'd made up prove to have been already written by someone else, there will be something of worth to hand on to posterity. 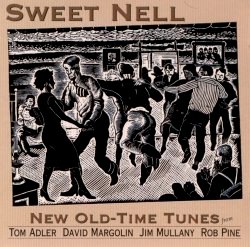 The four tunesmiths featured here - Tom Adler, David Margolin, Jim Mullany and Rob Pine - although hailing from different parts of the USA, have ended up playing in various different string bands based in northern New Mexico, and are friends.  Each has a few tunes they made up on the old-time style over the years, and this CD contains 21 of them.

Apart from Tom Adler, who plays banjo, the other three all play fiddle, so the musical mix on offer here has been augmented by bass,

cello and mandolins by a few of their NM musical associates; and a very nice noise they make - here's how the CD starts (sound clip - Kerry Shuffle).

I don't know how many homemade tunes they had to choose from in compiling the selection heard here, but there's a good selection of rhythms and styles on offer.  Most favour some version of 4:4 time, as might be expected, but this breaks down into polkas, hornpipes (in both English and Irish styles), reels and a couple of rags - to which can be added three waltzes.

I suppose it's inevitable that my favourite tracks are the ones

which sound less obviously American - those which I might consider adding to my own session repertoire.  A truly lovely Snowday Waltz (sound clip) by David Margolin, might as easily have come from Shetland as from Arizona, and must gain international approval for its melodic elegance.  The title track, played just a little more bumpily, could easily be and East Anglian one-row melodeon step-dance tune.

Jim Mullany and Rob Pine composed it during a session a couple of years ago, and named it for Paul Newman's daughter Nell, whose smiling face adorns the packets of munchies they get though in an evening of music-making.  Lovely stuff! (sound clip - Sweet Nell).