It wasn't until these two discs arrived in the post that I realised I already have both of them.  You see, although both are CD reissues of LPs from Ken Davidson's American Kanawha label, the Kessinger at least was also issued in Britain on Matchbox SDM 231. 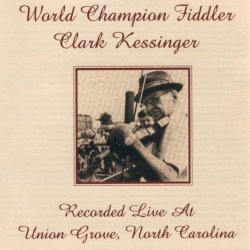 That Matchbox, recorded at the 1968 Union Grove Fiddler's Convention, held my introduction to the music of Clark Kessinger, and I did not find it a particularly auspicious one.  At the time, I dismissed its principal performer as a musician of fairly moderate talents, who was possibly past his best.  Well, time has disabused me of doubts about Kessinger's technical abilities.  Even so, I still find him something of a cold fish, and his jazzy technique and tendency to clutter the tunes with melodic variations are still difficult to take.  To me, it's a bit like listening to Sean Maguire, when I could be listening to Michael Coleman.

For this LP, the producers seem to have replicated a typical Clark Kessinger day at Union Grove.  Thus, it opens with a stiff and pedestrian rendering of Trombone Rag, in which the fiddle mimics the tailgating action of a New Orleans jazz trombone.  OK, this is early in the morning stuff and things don't seem to have warmed up yet.  And he does throw in some interesting variations.  But I don't warm readily to a record which starts off on such a low key, and I just wish that Kessinger had attacked it with the verve and vivacity of a good New Orleans jazz band! The next two tracks, Dill Pickle Rag and the Waltz, Rose Of My Heart are played in similar laid back fashion and presumably for similar laid back reasons.

From here on, the record gathers pace, and the playing becomes progressively more enjoyable as Kessinger takes us through a set of well worn titles.  By the time we get to Whistling Rufus, the brakes are off and the cinders are flying.  Yet the engineer never seems to maintain a head of steam for very long.  That is possibly a function of Kessinger's age, but I suspect it's more to do with his fiddling technique and his obvious delight in playing about with the tune.  Hardly have we begun to hurtle down the track before we are shunted into the sidings for yet another touch-up to the old gal's livery.  We'll never make Brighton at this rate!

By the final stretch, Kessinger has the throttle wide open and Poca River Blues fairly races along.  But while it's fast and lively, there doesn't seem to be an awful lot of engine torque there.  In fact, much as the crowd obviously enjoyed it, I was put in mind of the way the Chieftains would attack a lively slip jig. (Sound clip)

I have an LP copy of the Carpenter/Cottrell also.  This time it is in its original Kanawha incarnation, and that gives me an opportunity to mention the packaging.  To be quite blunt, I feel we've got the worst of both worlds.  The Kanawha sleeve is a good solid piece of craftsmanship, which is absolutely typical of its time and age, and just the thing to make me lament the passing of the LP era.  On the other hand, the CDs appear amateurish, with inserts which look as though they've been run off a home computer.  But if the packaging doesn't measure up to the standards of '70s LPs, the track notes to the Carpenter/Cottrell are woefully inadequate by the standards of today's booklet writers; good ones at any rate.  What's more, the CDs fail to measure up to modern standards in other ways.  Both are short, even for LPs; the sound quality of Elzics Farewell is at times desperately harsh; and neither disc seems to have received the benefit of remastering.

Elzics Farewell does however contain a lengthy and informative article by Bill Hale.  This appears to be a new addition, for it is not in my LP copy, and it lists a couple of websites. 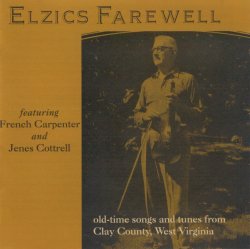 Even so, it took me a minute or two to realise that this un-headlined article starts on the back page of the booklet before continuing on page 2.  Also, whilst it contains some fascinating information about the murder of a local witch, it leaves its readers in the dark as to what a midnight feast is.

Yet, whatever its ancillary faults, I enjoyed Elzics Farewell immensely.  The singing and the playing are absolutely typical of West Virginia; mean, raw, hard driving and unsophisticated, and as rough and hairy as a backwoodsman's backside.  If you dig the music of the Hammons Family (Rounder 1504/5), or the West Virginia University Press releases of Edden Hammons and Johnny Johnson (West Virginia UP SA-1 to 3), then this is definitely for you.  I was particularly taken with Jenes Cottrell's newly self-composed New Titanic, utilising as it does, elements of the chorus of The Golden Vanity, and a variant of the John Hardy melody.

In fact, good things abound throughout the disc, in a fine and nicely balanced mix of fiddle tunes, banjo tunes, songs and actuality.  The two protagonists don't perform together, but Jenes gives us an unusual Hesitating Blues, and a splendid Gospel Plow (sound clip).  You may be more familiar with this one in its Black Civil Rights incarnation as Keep Your Eyes On The Prize. From French we get several splendidly executed West Virginia fiddlin' favourites, and one apparent rarity - Elzics Farewell.

Perhaps it's the double stopping, that this melody affords, which made French believe it to be an old English bagpipe tune.  That sounds highly unlikely to me, although I will admit that English bagpipe tunes are unexplored territory where I'm concerned.  I should point though, that the CD's title and its title track's missing apostrophe are none of my doing! (Sound clip)

Overall, I feel that the problems with these discs are primarily symptomatic of the times in which we live.  That is to say, while there are riches to be made from bargain basement bootlegs of say Bessie Smith or Bill Monroe, the market for records like these is so small that it doesn't justify the outlay which a proper revamp would entail.  That is a crying shame for, if the 1920s was the golden age of recorded early down-home music, the 1970s was surely its renaissance; and there is much recorded material from that latter period which remains buried by the march of the CD.  Could it be that, when time has run its course, and the said material becomes copyright exempt, we'll live to see a reissue resurgence of the renaissance?

[TriĢAgleĢFar Records, PO Box 4112, Dayton, Ohio 45401-4122, USA is the contact info I have, but they are available on-line from County Sales: www.countysales.com/php-bin/ecomm4/products.php?product_id=3916 and Elderly Instruments Recordings: www.elderly.com/recordings/artist_list_full_description?aname=Rutland%2C%20Robert%20%22Georgia%20Slim%22 - Ed.]