Down in the fields where the Buttercups do grow

'It does exactly what it says on the tin' is the current advertising slogan for a well known brand of varnish.  This phrase could just as well be applied to this cassette of songs sung by Jack Tarling. 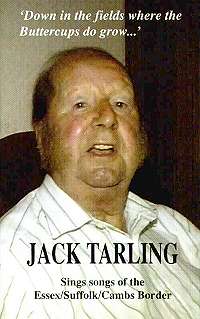 With its cover photo of Jack, ruddy-cheeked and mutton-chop whiskered and its title 'Down in the fields where the Buttercups do grow' you could be fairly confident of the kind of songs to be found on it.  What you wouldn't know until you've played it, is what a strong, clear voice Jack has and how much you'll enjoy listening to it.

Born in 1916, Jack has spent his life in the border country of Essex, Cambridgeshire and Suffolk, doing a variety of jobs, working mainly on the land, first with horses and later as a tractor driver.  During this time he became a well known and respected singer in the area, learning many of his songs from friends and family and at the Saturday night sing-songs in the many local pubs.  Much in demand around the houses in the vicinity where he would sing and entertain, he often sang for his supper at local functions, where the singing tradition has survived.  He sings, in the manner of traditional singers, with style and ability but is still able to let the song tell the story.  Such was his popularity in the heyday of local song, that he had to take a friend with him to help drink the beer that was lavished on him.  In 1939 he joined the Suffolk Regiment, only to be captured by the Japanese at Singapore and served most of the war as a prisoner of war on the Burma railway.  Even through these very difficult times he was learning songs from his compatriots and keeping them entertained.

Side One begins with three typical little ditties, The Onion Song, Tommy Tiddler and I Can't Get My Winkle Out.  These three ditties are a good introduction to Jack's singing and are linked with fragments of speech.  Souvla Bay is a poignant song learned from compatriots whilst a p.o.w.  This song, composed after a bloody battle during the First World War, is particularly popular among singers who served in the last War.  The Ball of Yarn changes the mood with its tale of a young man who asks a young lady if he can 'wind up her little ball of yarn'.  A popular 'folk' song with country singers, Jack's is a slight variant on the better known tune.  An Old Man he is Old warns of the perils involved in marrying an old man and is not heard so much these days.  The Convict's Song tells the sorry tale of a man condemned, through his greed and foolishness, to spend his life in a lonely prison cell.  The Jolly Herrin' is a well known 'tongue-twister' song, particularly in East Anglia, but Jack again has local verses.  Can I Sleep in Your Barn Tonight Mister? was an early American Country song issued here in the 1920s on a 78rpm record.  Poor Old Hoss is an older song.  The story of an old horse, worked until he dies when he is then fed to the hounds.  These sentiments were well understood by the working man.

I Met Her in the Garden Where the Praties Grow was another 78rpm release.  During the early part of this century there were many 'stage Irish' songs released on 78rpm records and they were often absorbed into the English country singers' repertoire.  I Wish I Was Single Again: another older song, often sung when the wives weren't in earshot!  The Tattooed Lady: parodies are very popular with traditional entertainers and this one, to the tune of My Home in Tennessee, turns up often and was sung by soldiers throughout both World Wars.  Down in the Fields Where the Buttercups do Grow: this is one of the most popular comic songs amongst country singers.  This may be because it was issued on a 78rpm in 1931.  It's the Rich What Gets the Pleasure: ever contemporary, Jack certainly does this late Victorian song justice as he introduces it.  Come Inside You Silly Bugger, Come Inside: a comic song, better known as The Lunatic Asylum.  Buttercup Joe, like Down in the Fields, this traditional song was popularised on a 78rpm record in the 1930s and almost every singer has a variant of it.  Maggie Was A Simple Little Girlie: an unusual song, almost certainly from the Music Hall era. Drury Lane.  Better known as Rosemary Lane, this song of a young girl left with a sailor's baby, is another 'standard' amongst traditional singers.  Eleven Months And Ten More Days: another widespread American song, again probably originating from a 78.  She Likes a Little Bit in the Evening: this saucy song was not known to me, again most likely stemming from the Music Hall.  These double-entendre songs, saying one thing and implying another, are ever popular!

The songs on this cassette were recorded by Neil Lanham in April 1995 and are typical of the repertoire of a country singer; 'folk' songs, comic songs, rustic ditties, music hall, parodies etc.  Jack is singing very well and his voice, clear and strong, belies his 79 years.  The notes are informative and in them Neil talks of Jack and his colleagues taking their turn in the monthly 'Round the Room' sessions at The Cock, Castle Camps.  I hope that Neil has been along with his tape recorder.  I look forward to a tape of those sessions in the future.

This cassette has been available for quite a while but if you want a spirited recording of a good traditional country singer then this fits the bill.