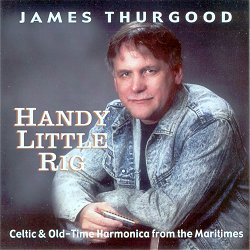 James Thurgood has been playing harmonica from early childhood and comes from a family of home music makers.  His father, from Cape Breton, was a harmonica player and his mother and maternal grandfather, from Prince Edward Island, played piano and harmonica respectively.

James plays a Hohner Pro-harp diatonic (more usually known as a blues harp) straight from the box with no modifications, and the CD was recorded live in one day with no overdubs.  He is accompanied throughout by longtime musical friend Kevin Roach on guitar.

The CD is subtitled Celtic and Old Time Music, the old time bit being dance tunes, and the Celtic portion being Cape Breton plus non-dance tunes.  The harmonica styles vary as well, so when playing old time the tongue blocking technique is used, whereby the right side of the mouth plays the tune, whilst the left plays rhythm chords.  With the Celtic style there is less rhythm chording but more note bending.

In my experience it is unusual to find traditional music played on this type of hamonica; most traditional players using a tremolo, or occasionally chromatic, but James says that whether by choice or necessity the diatonic Marine Band was the customary instrument in Cape Breton/Nova Scotia.  It was also common to play clogs and hornpipes as reels in this part of Canada, thus half of the CD comprises what are in effect reels - which I don't think are particularly well suited to the 10 hole diatonic.  I also have reservations about the guitar accompaniment but, having said all that, James is a fine player and a welcome addition to the recorded ranks.

The CD is available from James at : jthurgood@yahoo.com