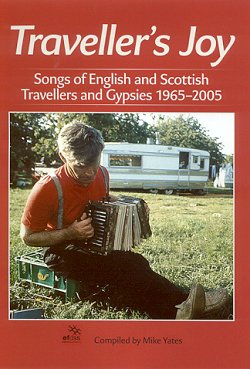 This excellent little book is really one which should have appeared years ago.  This is not to complain about the EFDSS (the present volume's publisher) in any way, but rather to record my surprise that no publisher has thought fit to provide us with something of the sort before.  Ever since Topic Records' publication of The Willett Family: The Roving Journeyman in 1963, there has been a slowly growing interest in and enthusiasm for Gypsy singing and - since the discovery of the Roberton and Stewart families in the late-1950s - an even greater one for Scottish Traveller singing.  Yet, if this present volume's Bibliography is correct, apart from a few articles in the FMJ and similar journals, only three books appear to have been published in the last half century ... the most recent of these (Sam Richards') in 1987.

So, after a 20-year gap, Traveller's Joy is most welcome - and very nicely presented.  That said, it's only fair to inform you that a proportion of the information Mike Yates includes here has already been published in the booklet accompanying his CD Here's Luck to a Man (MTCD320), published by Musical Traditions Records in 2003.  But since this CD has sold slightly fewer than 200 copies, I don't suppose this will dent Traveller's Joy's sales figures too much.  And even if you do have that CD, I think you'll find plenty here which is new and interesting - particularly on the CD which accompanies the book.  As far as I can see, only 2 tracks here are duplicated on Here's Luck ...

Mike's Introduction, as well as outlining the supposed origins of the Gypsy and Traveller peoples, contains the words and music of eight songs actually composed by Gypsies - although two of these are street-seller's cries, so may not actually be by Gypsies.  The other 50 songs in the main body of the book are songs sung by Gypsies and Travellers, though the extent to which these are representative of a general popular repertoire amongst singers of these two nations is unclear.  My experience is more limited than Mike's, but I'd be surprised if all 50 could be so described.  Maybe this is the reason for the paucity of Gypsy songbooks; the difficulty in actually deciding which songs can reasonably be included!

Notes on the Singers follows with brief biographs of the singers whose songs appear here and lists of the songs they contributed.  From this it becomes clear that Duncan Williamson is the major contributor with 15 songs - 5 of which appear on the CD.

Whilst discussing the book (rather than the CD), it's worth having a look at how the songs are treated.  Phoebe Smith's Young Ellender is the only one with which I am very familiar (having sung it myself for almost 40 years) - but that was learned from the 1969 Frank Purslow & Paul Carter recording, not Mike's ... which Steve Roud doesn't have in his Folksong Index, and which doesn't appear on the accompanying CD either.  So any appraisal of the accuracy of the text or melody transcriptions is difficult.  That said, I suspect that unfamiliarity with Gypsy speech patterns may have resulted in a few mis-transcriptions of the text: 'Down by a run and river stream' makes more sense, and rhymes, in the Purslow version 'Down by a runnin' river clear'.  Likewise 'And he swore like the God that made them' seems more reasonable as 'And he has swore by the God that made him' from Purslow.  Similarly, that wonderful broken-time melody (one of the reasons I like the song so much) sounds very odd when shoe-horned (as here) into 9/8 tempo, throughout.  Another oddity is that the song is given with two Roud numbers quoted: 1750, which is the entry for Phoebe's song; and 1417, which shows 12 entries, from 6 singers, for a song variously titled In the Town of Marlborough / Weddingmore or The Chain of Gold, of which we're told Young Ellender is 'a version'.  No reason for this ascription is given, and it was obviously not a view that Steve Roud shared.  None of the six named singers carry recognisably Gypsy surnames.

On to the CD - which is surely a treasury of delights.  For me, the two tracks from Phoebe Smith are most welcome, and I'm not aware of their having been published before.  Similarly, the four from Sheila MacGregor (Stewart).  The two new-to-me Mary Ann Haynes songs are great - even the most unlikely I'm a Girl Who's Done Wrong, which is the (as composed) rather awful I'm a Man Who's Done Wrong to his Parents parlour/music-hall epic - but it sounds rather good from Mrs Haynes.

The revelation of the record is Duncan Williamson, with five songs, four of which are splendid ... his Laird o Drum is amongst the best I've heard.  Indeed, I'm sorry not to have heard more of Duncan before this.  The sad exception is The Widow's Moor (The Widow and the Devil), which is a rather gross account of the appetites of a randy widow, and feels quite out of place here.  I wasn't at all surprised by Mike's subsequent revelation (in Letters) that the song was actually written by Mick Ryan.

But, a couple of minor quibbles aside, this is a most welcome publication from the EFDSS, and it well-deserves a place on your bookshelf / record rack.  Available from www.efdss.org