The Uyghur Musicians from Xinjiang

Music from the oasis towns of central Asia

This is going to be the sort of review which really ought not to appear in these pages.  This is because I have never in my life heard any music of this sort before, nor do I know anything at all about it.  Well, I know a little about it now from having read the excellent booklet notes by Dr Rachel Harris - but I had decided to do the review before I'd read a single word. 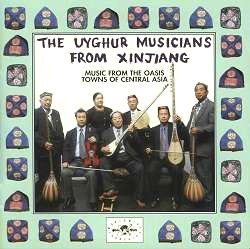 Why?  Because it's absolutely bloody wonderful, that's why!  So - my apologies to any of our reviewers who do know about Chinese music, but you'll have to go out and buy your own copy ... I'm not parting with this one!

Firstly I should say that this isn't really Chinese music because, although Xinjiang (sometimes known as Chinese Turkistan) is a northwestern province of China, the musical culture is far more Western than might be imagined.

Even so, it's a surprise to find that there's little on this CD which sounds more 'foreign' than you might find, for example, in central Italy!  Try a little of track 4 - Shazade Khan (The Prince's Daughter) a folksong from the Ili valley, performed by Riyazdin Barat, 65 years of age and the leader of the group (sound clip).

Contemporary Uyghurs trace their ancestry back to the 8th and 9th century steppe kingdom of the Uyghur Turks. After its fall, a proportion of the population fled into Xinjiang where they have remained ever since.  The 'Silk Road' between China and Europe passed through this area, and with it, diverse cultural influences - the most profound of which must have been Islam, and despite all the upheavals over the centuries, the Uyghurs remain Sufi Muslims.

Essentially, the CD may be divided into three sorts of music; folksongs, instrumental pieces from various festival traditions, and the Muqam.  This latter is considered the most prestigious of all, and is essentially a series of twelve suites, traceable back to the 16th century.  Each Muqam is characterised by a particular set of lyrics, mode, melodic patterns and modulations, and has a suite structure which comprises a series of vocal and instrumental sections, usually beginning with a free vocal section and ending with a faster dance music section.  As must always be the case, each area has its own Muqam tradition - similar to but different from the others.  Furthermore, this is a tradition which is not the prerogative of an exclusive group of professional musicians - anyone from kings to religious leaders to beggars, male or female, may perform it ... if they can learn it.

Four of the eleven tracks are Muqams - all played in shortened forms suitable for a CD which nevertheless allow all the sections to be heard.  Two are fairly short - 2˝ and 5 minutes, one is over 10 minutes, and one glorious example - the Penjigah Muqam of Ili

(one of the brighter Muqam, said to be preferred by the younger men), again led by Riyazdin Barat, is just one second short of 23 minutes!  It's not stated exactly how long these pieces might extend to in normal circumstances, but one can begin to appreciate how the themes are developed in this wonderful example.  Here's a short section from around the middle of the track (sound clip).

Track 10, the Nava Muqam of Turpan is sung by Tursun Simayi who accompanies himself on Satar, a long-necked bowed lute with a single melody string and twelve sympathetics, giving it extraordinary resonance.  Tursun is a younger man (aged 54) whose father was a camel driver on the Silk Road.  I can only give you a short extract from this 10 minute track - but it's well worth it (sound clip).

I've left 'til last the one track which does actually sound Chinese - or at least, conforms to some of the western stereotypes of the genre.  It's sung by Pasha Isha, described as 'Xinjiang's most famous female singer in the northern style'.  This track is an astonishing tour de force which probably sounds more different to the other tracks because of the violin in the backing,

rather than a markedly different singing style. All the swoops and stops you hear in this Ili valley folksong are present in the other tracks, but here they are emphasised and performed with incredible élan. The 'Xinjiang Nightingale' sings Mudan Khan (sound clip) - some nightingale!

Ben Mandelson and Globe Style are to be congratulated on a first class record in every respect - the latest of many which have been years ahead of the game (their Malagasy and Irish series, to name two outstanding examples).  It's also refreshing to read in the booklet notes:

Although Uyghur music has been to some extent formalised and brought onto the concert stage by the professional troupes, we have chosen to feature on this CD musicians whose roots are in the oral traditions of pre-Comunist musical practice, or who maintain these traditions today in rural Xinjiang.

I'm sure all MT readers will applaud that decision, born out by the mini-biographies of the performers in the booklet.  Two are fifth-generation family musicians, two are peasant farmers and one is a cobbler's son.  The eldest is 73 and the youngest 52 years old.  Two have been playing together for over 50 years!  I'm sure that this is the reason why - despite being from an entirely different culture from thousands of miles away - the music sounds so 'right'.

The most interesting and exciting record of non-English music I've heard this year - unreservedly recommended.