One More Dance and Then

This is the original 1978 LP recording, remastered onto CD format, with the addition of five extra live recordings made while on tour in Belgium in 1980.

Mike Briggs' remastering and editing is superb and the music comes up fresh as a daisy after 22 years on tape (sound clip - Mrs Grace Bowie). 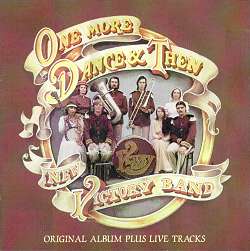 In my opinion, the live tracks don't stand comparison with the studio material - which is something of a surprise, since the reverse is usually the case.

I've tried to think back to 1977 and the first time I encountered New Victory's music.  Not wishing to rely entirely on my own, doubtless faulty, rememberances, I asked several other people who were around at the time - and our views seem to be remarkably consistent.  I thought that they were obviously very good, but there was a slight feeling that they might a little too clever for their own good - tinged with the idea that somehow they might not be quite as tuned-in to the roots of the music as we Southerners were.

I'm very pleased to say that the intervening years, wider listening and, it is to be hoped, maturity, have made me see what a load of old cobblers this opinion was.  And I am now prepared to state - almost without equivocation - that about two thirds of this CD contains some of the finest examples of English dance

music played by revivalists that I've ever heard.  It's so musical!  Just try a bit of the Mountain Belle Schottische (sound clip).  If this were a new record by a new band, none of the rest of us would get a look-in for the next three years!  I do have to add, though, that my enthusiasm for some of the six songs included within the 17 tracks is of a rather different order.

The new booklet gives the sources of all the tunes, a brief account of the original Victory Band(s) and an informative and entertaining history of the 'new' one.  Since this is not truly a new release, I don't feel it's right to give it the full MT review treatment - but I really would urge any- and everyone to rush out and buy a copy.  There's a great deal in the playing and the arrangements which we could all benefit from listening to.