Violin, Sing the Blues For Me

This is not so much a review as a postscript.  When I covered Old Hat CD 1003, Folks, He Sure Do Pull Some Bow, I mentioned that I was doing so without recourse to their earlier foray into the world of blues fiddle.  Just so happens that your editor had a spare copy. 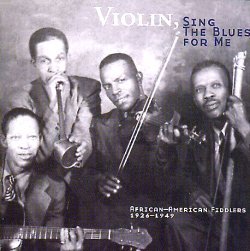 Just so happens that he was good enough to pass it on to me, and it just so happens that it clarifies some of the points I queried in my review.  For that matter, it also happens to make splendid listening.  It is a bit late in the day to give the product the usual incisive investigation.  Nevertheless, I would not want to keep all these wonderful sounds a guarded secret between my phonograph and me.

Like its postdecessor (if I may be allowed to coin such a word), the booklet contains a long and interesting article on the blues fiddle.  To my mind it is even better than the one which accompanied ‘Folks’, and it places the instrument firmly in its historical and social context.  I was particularly gratified to find Marshall Wyatt using the article to demonstrate that White country music has its Black antecedents.  He tells us that “Slave fiddling in the American colonies was documented as early as the 1690s, and during the 18th century black fiddlers became as prevalent on the Southern plantations as black banjo players.”  Also that, “Although most American fiddlers today are white, it is the black influence that distinguishes their music from Irish and English predecessors.”  I realise that this will come as a shock to those people who imagine that American country music was originally imported from Ireland, but I am afraid Mr Wyatt is right.  The Irish influence on American country music was minimal.

Moreover, I was surprised by a statement, backed up by documentary evidence, that the earliest New Orleans jazz bands contained more violinists than trumpeters, banjoists or saxophonists.  I presume that Wyatt is talking about dance rather than marching bands, for it is difficult to envisage a sideman of Buddy Bolden’s marching down the road playing a violin.  Nevertheless, the comment illustrates one of the difficulties of pigeonholing this music.  It may have been categorised by record companies.  It may have been segregated along racial lines.  Otherwise, all these forms; jazz, blues, country, jug band, hokum, Cajun even, were simply an eddying mass of interactive sound.

Regarding the interactors, the mixture is very much the same as on ‘Folks’.  Big Bill Broonzy doesn’t show up unfortunately.  Neither do the Georgia Yellow Hammers.  We do get their associates, Andrew and Jim Baxter though, and we get Lonnie Johnson.  The Mississippi Sheiks, The Memphis Jug Band - complete with Charlie Pierce - and the Tennessee Chocolate Drops are all listed among the credits.  There is also a track from that 1935 Bluebird session with Joe Williams’ Washboard Singers and Baby Please Don't Go.  I was startled to find that I didn’t have this particular recording in my collection, for it just has to be the definitive version.  Big Joe recorded it several times in his career.  So did a lot of British R&B groups back in the sixties.  If like me, you got sickened off R&B by endless white middle class kids chanting

There is also the familiar concoction of idiosyncratic appellations.  There are The Kansas City Blues Strummers, about whom nothing seems to be known; and the eccentrically named Whistler and his Jug Band.  Connoisseurs may think they’ve picked up a new outfit, when they see the name of The Mississippi Mud Steppers, except that the personnel turn out to be escapees from The Mississippi Sheiks.  For that matter, there is also an outfit called the Alabama Sheiks, who enliven us with Travelin’ Railroad Man.  You might think that was an attempt to steal some of Mississippi’s chic, and you’d probably be right - except that they weren’t alone.  The present CD has a track by a pair of reprobates called Frank Stokes and Will Batts.  Batts used to play along with Dan Sane in Jack Kelly’s South Memphis Jug Band, and you can hear that outfit on Highway No.  61 Blues.  However, when Stokes and Sane appeared together, and they don’t on this disc unfortunately, they were the Beale Street Sheiks.  Confused?  You bet.

Feelings of bewilderment should not stretch as far as that CD subtitle chronology.  The recordings do stretch up to 1949, but only because there’s a private recording in there of the Mobile Strugglers from Alabama.  Otherwise, the most recent take is that 1935 Williams track.

The Strugglers recording was made by jazz enthusiast Bill Russell and it is a useful reminder that this music continued long after the recording companies lost interest in it.  What a pity there weren’t more Bill Russells around to document its progress in the forties and fifties.  (sound clip - The Mobile Strugglers)

Talking of confusion, my ‘Folks’ review mentioned some of the difficulties surrounding the identification of two different fiddlers called James Cole.  I expressed regret that the earlier Cole had been excluded from the ‘Folks’ disc.

It’s nice to report therefore, that he turns up here with his partner, Tommy Bradley.  Their brand of music was ideally suited to this kind of record.  After hearing what they do here, you will surely want their complete recordings on Document DOCD-5189 .  (sound clip - Adam and Eve - Tommy Bradley/James Cole)

You may have to hurry, however.  Document recently changed hands and I have heard a rumour, that the new owner is contemplating the removal of certain catalogue items, when existing pressings run out.  I find the story hard to believe, although it came from a pretty reliable source.  Document’s notes and packaging are a long way behind Old Hat.  So is their remastering, but their catalogue does at least have the virtue of completeness.  Therefore, if this rumour has any basis, it makes the work of companies like Old Hat all the more valuable.