Deep River of Song: Virginia and the Piedmont 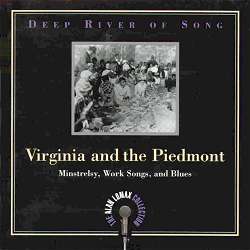 This is the seventh volume in the seminal series of field recordings of Afro American music made for the Library of Congress, mainly by John and Alan Lomax, between 1933 and 1946.  The original vinyl release ran to 12 volumes but others were planned and I believe that with this CD reissue as part of the Alan Lomax Collection, we can expect 2 or 3 more.  The transfer to CD also allows extra space and many of these recordings are seeing a commercial release for the first time.

For those unfamiliar with the series, the river in question is not, as you might have imagined, the Mississippi but "a turbulent river of oppression and disadvantage that these people are trying to ford."

Like some previous releases, this volume aims to look at a somewhat neglected and undervalued element in black American music, in this case the link between the minstrel tradition and the mainstream of American music.  This is not specifically a recording of prison songs but the majority were made at the North Carolina State Penitentiary at Raleigh in 1934 or the Virginia State Penitentiary at Richmond and the Prison farm at Lynn, Virginia or the Prison camp at Bourne, North Carolina during a 2 week period in May and June 1936.  The only exceptions are recordings of the Golden Gate Quartet, accompanied by Josh White on guitar and of Sonny Terry and Brownie McGhee.  These were made during concerts at the Library of Congress in 1940 and 1942 and, notwithstanding their obvious quality, especially in Sonny and Brownie's blistering version of John Henry, are strangely out of place, in tone if not in content, in this company.  The cynic in me wonders if these have been included to attract would be buyers with a familiar name.  The field recordings have an immediacy and intensity that is quite lacking in those cosy recordings made in front of an invited audience in Washington.  Whilst issued as part of the Alan Lomax collection, the concert recordings and those made in 1934 in North Carolina are the only ones that Alan was associated with directly.  His father, John A Lomax, assisted by Harold Spivacke, who would later be his boss at the Library of Congress, was responsible for the field recordings from 1936 that make up the bulk of this CD.

Most of the recordings here are of work songs in one form or another, even if not recorded in a work environment.  The songs are rather more loosely structured than those usually found in Mississippi and Texas prison recordings.  I can not say if this reflects differences in working practice but the songs do still reflect the concerns of imprisoned black men drawn from a poor agrarian area.  They sing of the prejudice and violence against them that they found outside the prisons (Tin Can Alley, This Land of Georgia), of loneliness and deprivation (Bitin Spider)

and of the hardships inherent in small scale farming (Po Farmer, Boll Weevil).  Here are J Kirby and a group of fellow prisoners showing the importance of getting mail from home on Every Mail Day. (sound clip)  The weekly mail delivery would probably have been the convicts' only real contact with the outside world and with loved ones.

Ezra Lewis' contribution, Tin Can Alley, the only recording known to have been made of him, is an early example of a protest song, telling of the singer's treatment at the hands of the police for committing just one crime, having the wrong colour skin.  It is also unlike any other song here being a rather strange mixture of blues and scat singing.

The blues are well represented, if not in quantity, then certainly in quality.  Two of the outstanding songs are Robert Higgins Prison Blues and When I Lie Down Last Night by Blind Joe.  Both songs explore similar themes, that of the harshness of the prison life and the joys that await the singers on their release.  Blind Joe's singing and guitar playing are very reminiscent of his near namesake, Blind Blake.  The real find though is Jimmy Strothers, a blind convict who contributes six songs to his own banjo accompaniment.  He made a fleeting appearance on an earlier volume in the series, Black Appalachia.  In common with most of the other singers, little is known about him, except that he was "blind and probably middle aged" in 1936.  He recorded a total of 12 songs at this session but never recorded again.  He is certainly very versatile.  His style and repertoire range from minstrel song (Corn-Shucking Time), through the songster tradition (Jaybird) and spirituals (We re Almost Down to the Shore) to deep blues (Going to Richmond).

On I Used to Work on a Tractor he even manages to evoke memories of Uncle Dave Macon.  His staggering near 6 minute version of Going to Richmond (sound clip) provides a fitting climax to an excellent CD and puts him up there with the great bluesmen of his generation.  I was reminded particularly of Peg Leg Howell.  I can only hope that the four remaining recordings he made turn up later in the series.

Lest it sound otherwise, can I make it quite clear that this is by no means a one-man CD.  There are many other fine performances here.

I am neither historian nor sociologist enough to be able to comment in detail upon the conditions that gave rise to this remarkable music.  However, as I sit here in comfortable, middle class suburbia,

I can only marvel at the inner strength of men who are not going to be beaten by an iniquitous system, who dream of escape, who describe themselves as "we poor devils" (sound clip - James Wilson & group: Walk Down Devils) yet sing without any hint of self-pity, of lost relationships, and of injustice and intolerance.

The notes are up to the high standard that I have come to expect of the series.  In addition to the usual notes on the songs and excellent transcriptions there is a most interesting introductory essay from Kip Lornell exploring the background to the music, an illuminating description from Harold Spivacke explaining Lomax's methods of working and a very useful bibliography suggesting other sources worthy of study.  The only thing lacking is any real biographical detail of the performers - still, these recordings were made more than 60 years ago and it seems likely that Lomax did not consult the prison records at the time.

It rather goes without saying that this is an important historical release exploring as it does an almost neglected area of American musical history.  It does also contain much fine music; worth the purchase price just for the contributions from Jimmy Strothers.  This is not perhaps the most accessible volume in the series but does handsomely repay repeated listening.  If you are new to the series I would not recommend this as a starting point.  Instead, try Saints and Sinners or Black Texicans which are considerably more varied and focused and make rather easier listening, and then go on to discover the treasures that lie here.