When Cecil Left the Mountains 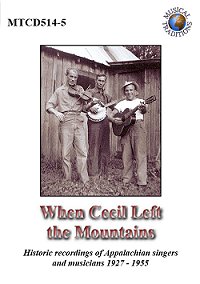 On returning home from his last collecting trip to the Appalachian Mountains in 1918, Cecil Sharp lamented the increasing intrusion into the area of radio and gramophone, items he saw as sounding the death-knell for traditional singing and singers.  "I fear I might have seen the last of them," he lamented.  To some extent he was right.  Youngsters in some singing families showed no inclination to carry on the tradition.  And yet, within a few years of Sharp's departure, the first commercial recordings of these traditional singers and musicians were made and when Maud Karpeles returned in 1950 and 1955 she found a reasonable number of active performers.  Having been a great admirer of the work Sharp did in Appalachia, I was amazed to find that a number of Sharp's song sources were later recorded, hearing performances of singers I'd previously only known through musical notation.  Emma Shenton (nee Hensley) can be heard singing eight songs - and talking about how she sang for Sharp as a 13-year-old.  Florence Puckett (nee Fitzgerald) sang 11 songs to Sharp and is also featured here.

Overall this is a spellbinding collection - 83 recordings lasting a whopping 149 minutes on two CDs.  There are 'big' ballads, cheerful songs, children's rhymes, all interspersed with spritely instrumental tracks, making an entertaining and varied listening experience.  Interestingly, the majority of performers are fairly straightforward, with little evidence of the popular bluegrass 'holler' and sparse ornamentation; these are intimate rather than 'platform' performances and all the more enticing as a result.

Once again we are in the debt of, obviously the performers and recorders, but also Mike Yates, who has put together this package, and Musical Traditions who have issued it.  Well?  What are you waiting for?