This CD contains recordings made at the first Western Massachusetts Sacred Harp Convention, which took place at Northampton, Massachusetts over two days in March this year.  257 singers took part in the event.  Some, we are told, were lifelong singers, while others had hardly sung before at all.  All were welcome - the CD insert and accompanying press release lay emphasis on the inclusiveness of the Convention:

"in keeping with the democratic nature of Sacred Harp singing wherever it is found, at this convention everyone is invited to sing, regardless of musical training or ability.  There is no such thing as a 'non-singer', and no such thing as an audience at a Sacred Harp sing.  The atmosphere is informal, and listeners are always welcome, though they usually become singers before long." 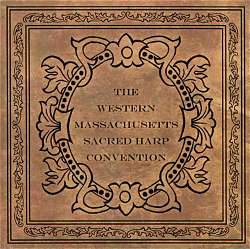 the singers sat in an inward-facing hollow square, one harmony part to a side, while one singer after another took turns to lead a song from the centre of the square.

What you get on the CD, though inevitably edited, is I think a pretty good representation of what a Sacred Harp Convention is like.  Each song is first sung through to the names of the shapes (fa, sol, la, fa, sol, la, mi, fa) rather than any words

- which can be pretty disconcerting if you've not heard it before. (sound clip - Green Street)  Then it's into whichever verses the leader has chosen to perform.  At the end of the song, there's a bit of shuffling, the next leader steps forward, announces his or her choice of song, the Convention Chairman sings out the starting notes for each part, and they're off into the next one.  Relentless - which is fine by me!  I actually wonder whether the gaps between the songs have been edited at all - if they have, it's probably in a fairly minimal way.

There are 27 pieces on this CD - all taken from the 1991 Revision of the Sacred Harp book, in case you want to sing along at home.  Again, the choice of material is fairly representative.  There are fast lively songs, and slow mournful numbers.  But as the press release says, Sacred Harp singing produces a "hair-raising sound that is joyous even at its most mournful".

There are some songs here with which I was previously familiar, such as The Morning Trumpet, but plenty which I'd not come across before; I particularly like this version of Wayfaring Stranger. (sound clip)

This Convention grew out of regular monthly shape note singing sessions at the home of Ruth and Richard Hooke - which provided the title of an earlier CD by Northampton Harmony, The Hookes' Regular Sing (Hazmat Records, 1996).  Now Northampton Harmony are a remarkable vocal quartet, including Cath Oss and Tim Eriksen from the band Cordelia's Dad, and whose members were prominent in the organisation of this Convention.  I bought their CD last year on the strength of my admiration for Tim Eriksen's singing with Cordelia's Dad.  I must confess - and I've now seen Northampton Harmony, as well as hearing them on CD - that I find them rather heavy going.  Four raw idiosyncratic voices singing in harmony, with plentiful vocal flourishes, at full tilt, and with no attempt to add variety to the sound through dropping parts, or the use of dynamics: sounds like just the sort of noise I'd really go for!  In practice, I admire their uncompromising approach, and it's an unforgettable sound which I wouldn't want to discourage anyone from experiencing, but I'm afraid the voices are just a little too exposed, and after a while I find treble Kelly House's constant swooping up to notes begins to get on my nerves.

On this CD, however, you get the same full-throttle approach to the songs, but the fact that you've got 250 people belting them out means that you don't hear individual voices to anything like the same extent.  This could be a bad thing, but in fact the end result is far from bland.  It doesn't sound like a choral society where all individuality has been ironed out - what you hear is a collection of individual voices, pulling together, but able to express themselves in their own way.  Turn the volume up loud, and it's an exhilarating sound.  Certainly listening to some of the performances here, then comparing them with some of Alan Lomax's Alabama recordings from the 1950's, I think they stand up very well indeed for vigour and enthusiasm.

The weekend started with a 'singing school' conducted by Richard DeLong, a singing master from Western Georgia, and had been preceded by a series of schools in the Northampton area led by Tim Eriksen.  This may have influenced the sound of the assembled singers.  But equally it may be that many of the attendees came with their way of singing these songs already well established: I like to imagine, although I don't actually know, that this gutsy singing style is typical of present day practice in the USA.

Nor do I know to what extent modern day Sacred Harp singing should be regarded as the continuance of a living tradition.  I'm sure that there is still a living tradition in states such as Alabama and Georgia.  But it appears that regular singings take place these days in pretty well every State of the Union, not just in the Sacred Harp's Southern homeland.  Tim Eriksen is keen to point out that many songs in the Sacred Harp actually originated in New England - but it could be argued that present day Northerners are reviving a tradition, not continuing one.  And while many of these meetings take place in churches and chapels, I imagine that may just be because these are convenient venues to use, not because all of the participants share the religious beliefs which originally shaped the composition and performance of these songs (it is perhaps worth noting that the Western Massachusetts Sacred Harp Convention not only welcomes participants "regardless of musical training or ability" but also "has no institutional, religious or political affiliation").

This is by no means intended to be a criticism of those who sing shape note songs today.  I can vouch for the immense pleasure to be had from singing these songs, as well as long-forgotten 18th century English gallery music, without any thought either of maintaining a living tradition or of sharing the composers' religious convictions - for me it's just a bloody good sing, and as far as I'm concerned that's as good a reason as any to be doing it.

Hazmat Records can be contacted at hampharm@aol.com.  This CD can be obtained in the UK from Phil Tyler, 44 Malcolm Street, Heaton, Newcastle upon Tyne NE6 5PL, tel. 0191 2658166, email mapy@globalnet.co.uk

There is an official Sacred Harp home page at www.fasola.org - an informative site, with a very extensive discography (and no, they don't appear to discriminate in any way between "traditional" or "revivalist" performances).