Flowers in the Wildwood

This has to be one of the broadest and most comprehensive surveys of women’s country music ever put on to a single disc.  It ranges from unaccompanied religious harmony singing (the Wisdom Sisters), to knowing comic numbers (Moonshine Kate); 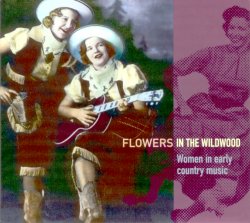 from socially-aware polemic (Aunt Molly Jackson) to novelty vocal effects (the Dezurik Sisters); from deep rural roots (Eva Davis and Samantha Bumgarner) to sophisticated, commercial studio music (Patsy Montana).  In musical content, it runs a gamut from deeply traditional through blues to semi-pop.  If this description makes it sound like an uncomfortable series of oppositions, it doesn’t come across like that at all, so much as like as a rich and satisfying mixture.  If there’s a track you don’t like very much, you don’t have to get hung up on it, as something completely different will be along in a minute or two.

But opposition is proposed as a key factor, by the writer of the booklet essay Rennie Sparks - there’s a running theme, she suggests, of 'bittersweetness' or 'sad-gladness'.  Very few of the songs included, she says, have a happy ending - they’re songs of 'hope and fear, of lovers adored and hated, of happiness lost and found.  These songs make your heart swell and crack and with each crack you rise just a little closer to heaven.'  She’s quite right, of course, although I’m not sure whether this was a guiding principle in the selection, or a view that emerges after the fact.  Also, to be honest, it’s a description that could be applied to any number of collections of vernacular American music of the time, from Cajun to blues, and come to that, it’s one of the things that appeals to us about all sorts of traditional musics.  I’m not sure it really offers us much very specific insight into what makes women’s songs of the period distinctive.

So what, if anything, does make them distinctive?  To state the obvious, the women’s voices make these women’s records, but I’m not sure there is really much in the content that distinguishes them from what their male counterparts were doing at the time.  The song that exemplifies Rennie Sparks’s point best, perhaps, is All the Good Times are Past And Gone, but this is in fact a male-female duet (Fred and Gertrude Gossett).  It might be true that a male singer would not have tackled My Poncho Pony, as Patsy Montana does here (although there’s probably a more knowledgeable reader who could readily prove me wrong on this) and the role-displacement of My Man’s a Railroad Man is likely to be distinctively female - by which I mean that a man would have adopted the role for himself, and sung “I’m A Railroad Man”.  Her guitar accompaniment is clearly influenced by Jimmie Rodgers, 'The Singing Brakeman', which underlines the point.  I’m not offering anything much here that would add to the appreciation or enjoyment of this music, and at one level, I’m inclined to feel that seeking for something that makes the women’s records different is more about enjoying the characteristic beauty of the voices, particularly the harmonies, whether combining with other women or with men.

Having said that, it seems unarguable that part of the appeal of The Carter Family’s songs was that they brought a feminine sensibility to the genre (as well as two great women singers), illustrated here by Just Another Broken Heart.  Their other contribution, the wonderful King’s Highway is a religious song in which gender has no particular relevance, even if a feminist analyst would surely find significance in the fact that God is the 'King'.  If you wanted two songs to sum up the music of this legendary trio in just six minutes, you could scarcely choose better than these.

Some songs have primarily curiosity appeal, at least in retrospect - the Dezurik Sisters combine a speeded-up vocal harmony style with yodelling and a variety of other novelty vocal effects.  These tracks have an undoubted fascination, but I have to confess they’re also tracks I find hard to love - indeed, hard to listen to more than once.  No doubt there are good reasons why we get two tracks by this pair and only one by Aunt Molly Jackson, whose contribution shows a political acuity and a robust musicality that gives an entirely different perspective to the 'bittersweetness' of the compilation’s theme to that of any other track included.  It’s not easy listening by any means, but that’s what makes it especially cherishable.  We also get only the one by Eva Davis and Samantha Bumgarner, Big-Eyed Rabbit, the earliest track here and the one that offers us our deepest look at the roots of country music.  Rough and unsophisticated, a glorious communication straight from the rural backlands, it is entirely enslaving, and - unlike some other tracks here - left this listener eager to hear more.

Another curiosity comes from The Aaron Sisters with the Song-O-Pators, which the notes tell us was released in a popular series, rather than an old-timey one.  There’s a rural twang to their voices, but I reckon the main influence here is that of the male quartets to be heard in the race records series.  It’s another interesting example of cultural interchange between black and white Southerners, and also of the potential of unaccompanied harmony singing.  There’s a couple of other good, and very different, examples of vocal groups here, too - The Southland Ladies Quartette and the Wisdom Singers; to quote the notes, they 'lie firmly within the tradition of Southern singing schools', which accounts for the particular combination - heard in both cases - of tight discipline of both harmony and timing, with an edginess that speaks of authentic rural music-making and sincere religious feeling.  There’s some good examples, too, of the popular singing groups that were boosted by the widespread availability of records and the huge reach of radio.  The Coon Creek Girls offered a take on the music that was laidback and still notably rural in orientation, while The Girls of the Golden West have a slightly more contrived sound about them - the harmonies that bit sweeter, the lyrics conjuring a nostalgic fantasy of cowboy life.

Overall, then, this is a highly entertaining selection, with good informative notes, and packaged with taste.  If I don’t sound as enthusiastic about it as I might, it’s perhaps because while I enjoy the breadth and variety of what’s included, there are clearly things here that I get much more of a kick out of than others.  This is likely to be true for many potential buyers, even if their particular favourites won’t necessarily be the same as mine.