Here is a fine recording from last year which may have slipped under the radar of the average traditional music buyer.  Willie Kennedy is an old-style fiddle player from Cape Breton Island, Nova Scotia, born in 1925, and this is his first full recording.  He also appears on Rounder 7038, The Rover’s Return, one of an anthology series highlighting Cape Breton fiddle music produced by Mark Wilson, and reviewed in these pages.  This release is part of Mark Wilson’s North American Traditions Series on Rounder, and so the recording quality and notes live up to Mr Wilson’s usual standards of excellence. 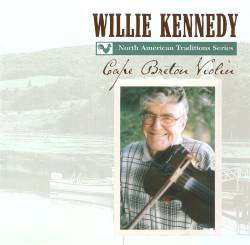 As with other recordings in the series, the bulk of the notes are devoted to first hand accounts from Willie himself recalling his lifelong involvement in traditional music, and I have to say that it has been an extraordinary life indeed.  Willie grew up surrounded by music in the Kenloch community on Cape Breton, and there were traditional musicians on both sides of his family.  He learned primarily by ear, as tunebooks weren’t widely available during his early learning period (he started young).

Despite this ideal environment, learning was something which he had to work hard at.  The same can be said for current young fiddlers; however, few of them can truly appreciate the lengths to which players such as Willie and others of his generation went to learn music.  In some ways, he nicely fits the stereotype of the old man who exaggerates the harsh conditions of life of his youth in explaining how much easier life is for children today.  For example, concerning travel, Willie can truthfully claim “we didn’t have a car in them times, so you’d either have to hitch hike or take quite a little walk to get” to a dance.  Willie recalls one year as a teenager when he was asked to play a season of dances with fiddler Angus Allan Gillis in what amounted to a sort of apprenticeship where he had to ‘learn on the job’

So I played a whole year with Angus Allan and he was such a gentleman, Angus Allan was.  He’d want me to play my stuff and he’d just follow me, which a lot of the others wouldn’t do.  But I didn’t have enough to play for a whole dance, so I’d have to fit in somewhere with him, follow him as best I could.  I learned a lot of my older tunes that summer.

Willie is a treasure trove of lore concerning Cape Breton fiddling and the changes it went through over the course of the 20th century.  He is a living link to the playing styles and social customs of the 19th century which persisted in Cape Breton just past WWII into the 1950s when most traditional community dances died.  Having lived through these changes in the tradition, Willie laments recent trends in dancing and playing on Cape Breton.  He describes old-time dances as leisurely and casual, with plenty of talking and socializing between sets.  Sets themselves weren’t nearly as long as they sometimes are these days, with only two tunes needed per figure.  In contrast today’s dances sometimes require one or two dozen melodies strung together with each played two or three times through.  Willie describes contemporary dance styles as “mechanical”, with dancers being too dependent on pre-planned choreography & less able to improvise their own individual steps.  Likewise concerning many younger fiddlers, he complains that their tempo has become too quick and that they therefore miss many of the grace notes and other decorations which have traditionally been a hallmark of Cape Breton fiddling.

Lest all of this should give the impression that Willie is just a curmudgeon, I can say that from his music and his recollections, one gets the impression Willie is a cheerful soul.  In all photos he has a broad smile and in his transcribed interview he comes across as a friendly and warm character with a bit of a mischievous streak.  It’s an understatement to say that Willie seems at home with his music, because like eating and breathing, fiddling is a basic function of his existence.  Willie’s own playing is of course very natural and graceful, full of the old birls and other decorations common to Scots based music.  As he says, "I’ve got the old stuff in me so deep I can’t do it any other way."  Mark Wilson points out in his own contribution to the notes, ‘One of the pleasant paradoxes of traditional music is that the performers who prove the most genuinely originally are at the same time the most deeply loyal to the background from which they come.’  Consequently, for anyone well versed in Cape Breton fiddling, Willie’s playing is instantly identifiable.  This is one of the greatest compliments a traditional musician can receive.

Concerning the music of this CD, I found myself drawn to his jigs such as in the 5th track, Wedding / High Bridge / Ships are Sailing (sound clip).  Willie’s playing is sweet and sure, and is wonderfully supported by that stalwart piano player of the NAT series, Gordon MacLean.  His intonation is squarely within the Scots fiddle tradition and only very occasionally does it ever sound off, such as when he ventures into high position while the piano is doubling the melody.  Despite Willie’s observation that the tune sets were much shorter in the old days, he is more than capable of stringing together a gloriously long set such as to be found on track 10, which puts together 12 tunes and lasts nearly 10 minutes.  Mark Wilson stresses that this set is a sample of the kind of playing Willie would do in a parlor setting, as opposed to for dancing,

and Willie takes advantage of this to display a range of moods and tempos.  Thus in the opening tune of the 3rd track, the dignified march, Kitchener’s Army, gives way to modal seriousness of the strathspey, Devil in the Kitchen (sound clip).

If you like your fiddling played in a distinctively relaxed manner full of all the subtleties to be found in the best traditional music, then this release will appeal to you.  For aficionados of Cape Breton and Scottish fiddling, this recording is a must-have.  For everyone else, it’s a good introduction to Willie Kennedy, his music, and the tradition from which it comes.