Indian Fiddle Music of the Americas

I approached this compilation with interest and a certain prejudice engendered by some uncomfortable memories of my daughter and the practice scrapes of school violin lessons.  However I was soon won over by the extraordinary range of sounds, tones, and textures that are presented here.  The recordings cover a geographical range of several thousand miles, from the High Andes of Peru and Bolivia, through the jungles of Ecuador and Guatemala, the deserts of Mexico and Arizona, to the forests of Cape Breton and Alaska.  Whilst several native cultures of both North and South America appear to have had indigenous chordophones - 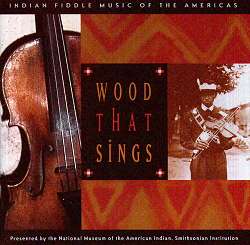 instruments of hollow wood with one string- it is the acceptance and modification of the European violin, introduced mainly by Hispanic missionaries, that this compilation documents.  All the native cultures represented have European influences to a greater or lesser extent, synthesized with remnants of earlier civilizations such as Aztec and Mayan.

For me, the recordings presented here fall into two groups.  The first half of the recordings, from South and Central America and Mexico, are of folk making music.  The second half of the recordings, from the rest of North America, are of people playing folk music.  All good music, some technically brilliant, but a subtle difference in the meaning of the music to the artists.  To a degree, this may reflect the compilers' choice from what was available to them.  Scholars at local 'Cultural Institutes' have selected the tracks representing South and Central America; all are recordings of folk at work and at play, at ceremonies and celebrations.  Ethnomusicologist Daniel Sheehy writes knowledgeably about the repertoire and the place of each piece of music in the native culture.  In contrast, the compilers who selected the tracks representing North America either had very few field recordings available to them, or used a completely different set of criteria in judging what to include.  They have chosen recordings of concerts and studio performances, taking the music out of context, and in the process loosing its relevance.

The first track, from Bolivia, is a solo of short phrases, each culminating in a wonderful single string vibrato of pure rippling sound. Then a band from Columbia is driven by drums and pushed along by horns, while the fiddle has the melody.  From Peru, part of a long and complex annual fertility ceremony, where women's voices and the fiddle alternate, interspersed with animal horns; you can feel the intensity of the participants,

who are totally absorbed in their task.  The seke-seke from the rain forests of Venezuela provides some lively dance music, and the 3-string rabel from NE Argentina is accompanied by the local 5-string guittarra (sound clip).

A remarkably complex sound from Equador is provided by the 2-string kitiar,

the melody inextricably interwoven with the vocal of a song of short phrases, in triple meter but with a strong beat, and with a simultaneous drone providing a shimmering undulation (sound clip).  The small tribes of Mayan descent in present-day Guatemala are represented by two contrasting tracks of Fiesta music, of violin with harp, and violin with guitar.  The latter tune has a complex rhythm, on the surface in triple time, but broken into two followed by four beats - is there such a signature as 3/6?   Mexico gets 5 tracks, all of very different character.  The first, apparently with Mayan influence, is again in the complex 3/6 or perhaps even 6/12 meter, with short, staccato notes on the home-made violin, accompanied by bombo and tarola drums (wonderfully onomatopoeic names).  Then another Mayan-influenced town festival (the description of the dance sounds rather similar to the Helston Furry Dance!), and an Aztec-influenced wedding dance.  There is an extraordinary sound produced by the raweri, a fiddle from the western highlands of Mexico, having 2 strings of horsehair and two of metal, giving a metallic ringing sound.  Finally, from the NW desert coast, the enneg or 'shrieking thing', a monochord with a melodic range of one octave, sometimes played with a bow made of mesquite root and strung with a girl's long hair.

The Apache chordophone, the 'wood-that-sings' (nadah benagolze) of the CD's title is demonstrated by Chesley Wilson, after singing the words to a song, and playing the same tune on a home-made flute.  The rest of the tracks are of transplanted musicians playing transplanted European folk music.  Two tracks from Arizona, of genuine village music, but with the musicians sounding rather self-conscious at a folk festival, and a 'chicken-scratch' band who are used to playing for public dances so sound rather more relaxed.  There is a geographical leap to Nova Scotia for two tracks of the Lee Cremo Trio playing strathspeys and reels, and a jig medley - Scottish, Irish, thumping piano and plodding guitar, all rather ordinary except for Lee Cremo's use of triple bowing reminiscent of Michael Coleman.  Lawrence 'Teddy Boy' Houle from Manitoba, Canada, is definitely master of his instrument, and knows it.  His medley of tunes, styles and rhythms is expertly put together as a showcase for a virtuoso performance, and this time the accompanying guitar adds another dimension, underpinning the tunes with sensitive contrasts,

while Houle's feet add a percussive dance rhythm in the French style.  Of mixed blood and mixed influences, Houle's performance is a tour de force, and it's great fun, too (sound clip).  The last 4 tracks feel a bit like fillers.  Alaskan Bill Stevens and Jimmie LaRocque from North Dakota, each with their accompanying guitar thrashers, have such strong European and County-Western influences that it's hard to detect any native relicts, though there's some interesting vocal gymnastics on an unaccompanied version of the well-known fiddle tune Turkey in the Straw, from Wisconsin.

So overall I've learnt a lot from this compilation, particularly what to me was previously unknown musical territory, the adaptation of the violin to native musics of South and Central America.  With the exception of the stimulating 'Teddy Boy' Houle, the North American tracks are entertaining but not exciting.  For the South and Central American music, I thoroughly enjoyed this record and heartily recommend it to you.