This is another step in Rounder’s project of reissuing the Library of Congress’s ‘Folk Music in the United States’ series, and Negro Work Songs And Calls brings back to availability another release that first appeared in the 1940s as an album of 78s, later being transferred to LP. 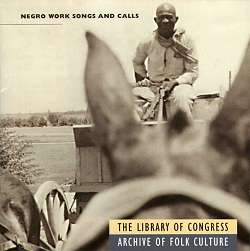 Although the booklet notes are presented unamended - being themselves of some importance as evidence, for historians of contemporary thinking about, and analysis of, folklore - the recordings themselves have been remastered from the original sources, and as with other releases in this series, this sometimes lead to the emergence of new and interesting sounds and information.
Thus Henry Truvillion prefaces Possum was an Evil Thing with an explanation of the circumstances in which it would be sung: going home after a day’s cotton picking, with the evening meal of possum and sweet potatoes in mind.  I’m not sure, however, that either this or Come on, Boys, and Let’s Go to Huntin’ are children’s songs, as asserted in the notes; I think it more likely that Truvillion’s reference to ‘twenty-five boys and twenty-five girls … all singing the same song back at one another’ reflects his acceptance of the racist habit of referring to black men and women as ‘boys’ and ‘girls’.  This necessary conformity to stereotypes - necessary for self-preservation - is also encountered on It Makes a Long Time Man Feel Bad, recorded by Kelly Pace and a group of fellow convicts at Cummins Farm, Arkansas.  At 6’08”, this track is getting on for twice as long as the previously issued version, which obviously had to be truncated to fit on a 78; at the end of the song, there is an announcement by one of the singers, probably Pace:

There are a number of interesting details in that announcement for those concerned with the minutiae of discography, the most notable being that the second song announced is not listed in Blues & Gospel Records 1890-1943, presumably as a result of its also not being listed by the Library of Congress.  More important, of course, is what the notes rightly call 'the tremendous life-giving energy of the group joined in communal labor burst[ing] up through the bitter and somber lines of the song'.  It’s very obvious that work songs, especially but not only in prison, were vehicles for the expression of hostility and grievance against a system that perpetuated slavery by other means; ways to give meaning to meaningless tasks by alleviating boredom; and tools of empowerment and passive resistance, enabling the work gangs to set the tempo of a task at the pace of the slowest worker (who might thereby escape a whipping.)  There’s a good deal of gallows humour, too, as when Allen Prothro, recorded in the Nashville Penitentiary, but recreating his job as a track caller in the so-called free world, sings a rueful wish:

If I’d known my cap’n was blind,
Wouldn’t went to work till the clock struck nine

Similarly, Willie Williams, complaining that "they don’ ‘low me to beat ‘em, got to beg ‘em along", is surely contrasting the rules he has to follow for the wellbeing of his mule team

with the absence of constraints on the mistreatment of convicts.  The death threat to his mules in this sound clip is bitingly ironic, and his comment on the captain’s empowerment by a gun, witheringly sarcastic.  (sound clip)

But although a little over half the CD’s running time consists of songs recorded in various prisons, it casts its net much more widely - as far as the Bahamas for the boat launching song Roll ‘Im On Down, sung to the unlikely tune of Blow The Man Down.  The tremendous lift and swing of this performance are clearly aimed at overcoming the inertia of a boat that has been beached for the hurricane season; but enjoyable though it is, the song stands out somewhat incongruously from the African-American remainder of the tracks.  I’m not saying that the compilation would be better without it; the intention of those who put together the original set of 78s was clearly to give listeners an idea of the range and variety to be found in a field that was a closed book to most Americans, whether professional students of folk music and folklore or more casual listeners.  Even so, it was perhaps a touch uncompromising to start with 3’39” of Henry Truvillion giving the time, in rapid fire speech, to a gang unloading rails.  It may be possible to discern some of the genetic material of rap in Truvillion’s impressive declamatory energy, and in his verbal inventiveness ('Walk humble and don’t you stumble.  Don’t let me hurt nobody.  This is the safety-first company'), but at best this track - like much rap, indeed - lurks on the borderlands of music.

It’s something of a relief to move on to 86 year old Sam Hazel, recalling how he used to heave the lead line on the Ohio and Mississippi Rivers, and sing out the soundings to the word passer on the hurricane deck, who would relay them to the pilot.  (sound clip)

Still more affecting, considered purely as music, are the field hollers and calls recorded by Thomas J Marshall and Samuel Brooks, who were students at the Southern Christian Institute, Mount Beulah College, in Edwards, Mississippi.  These brief, pensive songs would be sung by men working alone, to express their feelings, and to convey messages to others - alerting them to the progress of the day, for instance.

I want to finish, though, with an extract from Old Rattler, sung by Mose (Clear Rock) Platt (who killed three men by throwing rocks at them) and James (Iron Head) Baker (on whom a tree fell, to no ill effect!)  The ostensible subject of the song is a dog of legendary man-hunting capacities, but it’s not hard to see that the significance of the distance Rattler has to 'run that nigger' lies in what it says about the endurance of the escaped convict, not that of the dog.  With telegraphically compressed allusiveness, the verses heard in this clip also celebrate, and sigh for, the availability of women and family life in the free world; note the pervasive presence of racism (there was indeed a row about discrimination at the 1892 Chicago World’s Fair);

and hold out the ultimate hope of getting away from the prison system ('goin’ to the North where you can’t go') in terms that surely descend from the days of slavery.  (sound clip)  The complete song lasts three minutes or so, and it’s all at that level of musical and verbal creativeness.  It’s good to have this music generally available again - and it’s a pity that it was racism and violence, both official and officially sanctioned, which made its creation an urgent necessity.