Where Will You Be Christmas Day?

"They didn't want it good. They wanted it Thursday." Ronald Reagan 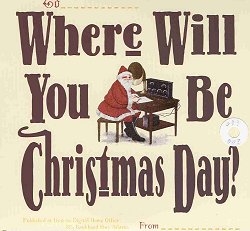 Fear not my friends, the above quote refers not to the record under review, but to the review itself.  You see, this delightful Yuletide extravagance has just dropped through my letterbox and there’s only blankety-blank days left in which to post the epistle.

So, from the time perspective at any rate, I am relieved to find that this is a far more modest venture than Goodbye, Babylon; Dust-to-Digital’s block-busting debut anthology, reviewed here.  But modest or not, and allowing for a few unseasonal moans, I can pronounce it a consummate cracker.  It comes in an attractive gatefold jacket which looks a bit like an outsize gift tag.  There is no booklet as such.  Instead the jacket holds a small volume, in which the track are listed together with some fairly minimal discographical information.  I was a bit nonplussed at the lack of transcriptions and track notes, but these can be downloaded at http://www.dust-digital.com .

Unfortunately, the site’s webmaster has seen fit to place each track on a separate page, which makes opening up (and in my case, printing off) a tedious task.  Also, there is no introductory essay and the track notes are sparse and less than scholarly and in one or two cases, non-existent.  For instance, the entry for Norman Edmonds’ Breaking Up Christmas reads as follows:

Also, the lack of information concerning Leadbelly’s Christmas Is A Coming, plus the unusually clean sound, plus the suggestion that this was an extemporised performance, led me to think that this must be the off the air tape recording which Frederick Ramsey Jnr made in 1948.  However, a quick comparison with Shout On (XTRA 1126), where the Ramsey recording appears, revealed that it is not and I have yet to discern the source.

This is a long way behind the standard set by Goodbye, Babylon; a fact which is all the more surprising since Dust-to-Digital’s Holiday Series is derived from the playlists of Richard Spottswood’s excellent Obsolete Music radio show on Station WAMU, Washington.

1  Given the extent of the Spottswood erudition, I’d have thought that detailed notes could have been compiled from the archives of these programmes.

Onto the CD.  I was slightly disappointed to find that it kicks off with Vera Hall Ward’s 1959 recording of The Last Month Of The Year, which she made for Alan Lomax.  There’s absolutely nothing wrong with it.  Indeed, for me, Vera Hall Ward was a singer who could never put a foot wrong.  It’s just that this particular recording is already available on two Rounder CDs.  Meanwhile the version which she sang for Harold Courlander in 1948 languishes in comparative obscurity.

From hereon though, my disappointments were almost at an end.  As one expects from the estimable Mr Spottswood, this disc covers an awful lot of ground; and it is all quality.  Besides Mrs Ward, and several other sanctified singers, the varied strands of down home Americana are well represented.  That means there are various shades of blues, old time country, and jazz, plus a couple of calypsos.  But it was the three tracks from outside the English speaking world which had me really transfixed.  Pawlo Humeniuk’s Dance under the Willows (Tanec Pid Werbamy), and Los Jibaros’ Décimas de Nacimiento are superb examples of the Ukrainian and Dominican musical genres.

For me, though, both were eclipsed by the eerie and spinetingling Pasquale Feis track; Tu Scende Dalle Stelle (Pastorale di Natale).

Although this piece was recorded in New York in 1917, the custom of accompanying Christmas carols with bagpipe and oboe or reed pipe duets, is deeply rooted in Italian tradition.  And if you’re a fan of Handel’s Messiah, you may detect something familiar about this style of performance.  It is said to be the inspiration for the pifa or pastoral symphony, which Handel included in that most splendid of oratorios.

Given a singer like Buell Kazee and a title like Lady Gay, you could be forgiven for anticipating a Southern Appalachian version of a Child ballad.  You would not be far wrong, for this is Kazee’s account of The Wife of Usher’s Well (Child 79).  Normally I find Kazee to be a somewhat turgid singer.  Here though, he throws off the leaden approach, and turns in a performance to enhance this ballad’s tangle of maternal emotion and celestial imperative.  Even so, scholars may be surprised at its inclusion here.  Although the present text locates the action at Christmas time, it is more commonly associated with Martinmas.

By the same token, with a line-up like Kelly Pace, Aaron Brown, Joe Green, Matthew Johnson and Paul Hayes, you could be forgiven for expecting a prison worksong.  In fact, Holy Babe is an acapella rendering of the Dilly Song (Roud 133).  Moreover, given the recording’s time and location, it is a remarkably stylish performance.  And it swings like mad.

Recently, several traditional music anthologies, have delighted me by embracing the world of early jazz.  I regard this as a welcome development, for I see no reason why, say, the New Orleans Boot Blacks should be considered any less ‘traditional’ than, say, the Georgia Yellowhammers.

Having said that, though, I do feel the track by McKinney’s Cotton Pickers was a less than fortunate choice.  The Cotton Pickers were a fine band, but their tight and regimented style contrasts oddly with just about everything else here.  Also, their choice of number - that old chestnut, Gee, Aint I Good To You - is distinctly out of kilter with the message of Christmas.  Indeed, the song’s only connection with the festive season occurs with the line Fur coat for Christmas an' a diamond ring.  To be honest, I feel that thematic digressions, such as this or the Buell Kazee track, work better in a radio programme than on CD.

The other two jazz recordings are much more appropriate.  If you enjoyed the Cotton Top Sanctified Singers on Goodbye, Babylon, you will enjoy their Christ Was Born On Christmas Morn every bit as much.  And Bessie Smith is just Bessie!  At The Christmas Ball must be one of the corniest songs she ever recorded, but Bessie was never anything less than magisterial.  Only she could turn a piece of doggerel like this into something worth listening to.

One final blast of Bah! Humbug! before we lay Marley’s chains to rest.  There is nothing here from Britain or Ireland.  Given the enormously diverse range of carolling and other Christmas traditions from these islands, that is an unfortunate oversight indeed.  What a delight, for instance, if the Alabama Sacred Harp Singers’ While Shepherds Watched (Sherburne), had been coupled with one of the many versions of that carol, which you can hear in the pubs of South Yorkshire during the run up to Christmas.

Yet I wonder if I’m not guilty of overdoing the “Are there no workhouses, are there no prisons?” routine for once.  A record like this is there to be enjoyed, and greeted with pleasure by all the people you give a copy to.  Get out there.  Buy the thing and have yourselves a merry little Christmas.

(Thinks.  And all that without missing the deadline.  Who said Reagan didn’t know what he was talking about?)

[Unfortunately though, America On Line didn't make it good, or Thursday.  The Timeline/Warner/AOL corporation signally failed in its responsibilities - not delivering Fred's epistle to me until 1:30 the following morning!  Ed.]