Voice of the People - Volume 9

Rig-a-jig-jig -
Dance music of the south of England 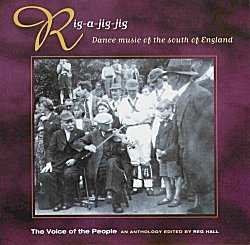 I suppose it was inevitable that, of all the CDs in the series, I would have to review this one.  As I noted in my last review (Volume 17 - Ballads), although I was rather dubious of the 'themed format' idea to begin with, I have grown to love it after several listenings.  The few volumes which have a 'type' theme, like this one, are less successful in my opinion.  By that I mean that they are not as suitable for prolonged listening at one go - as they rarely have the variety, the light and shade, the surprises, of the others.  The intention of this series, as I understand it, was to make the music accessible and enjoyable to a wider range of listeners than had been the case in the past - and I think Topic have been notably successful in this aim, for the most part.  The four music and ditties volumes, and to some extent the ballads one, fall outside the formula - having no theme, but instead grouping together material of a particular type.  This makes for a degree of sameness in the tracks, and I think few people would want to listen to all 75 minutes of these volumes in one sitting.  This does not mean that I think the material on them is in any way inferior.

Reg Hall's essay on 'Dance music of the south of England' is fuller than most, running to six pages, and the mini-biographies of the performers are mostly substantial and full of interest.  While nothing that Reg says is incorrect, I do feel that he only paints part of the picture and leaves the reader with an impression which is to an extent misleading.

He points out that social dancing in the English villages in the 18th and 19th Centuries was probably not as common an occurrence as might be supposed - generally being limited to annual events like harvest suppers, servants' balls and friendly-society feast days, plus the occasional spontaneous dancing in, or outside, pubs and inns.  But he goes on to say that the ownership of an instrument and the ability to play it was even more unusual.

I think this was true for the period from around 1835 to 1875.  In 'Lark Rise to Candleford', Flora Thompson states that it was only after the relatively large rise in agricultural workers' wages (around 1875 and coinciding with the availability of cheap mass-produced instruments) that many such people were able to afford the luxury of musical instruments within the family.  Prior to that time, the very few which had existed had been sold to pay for medical bills and similar emergencies.  She believed that, in the area of central southern England she was describing, the ordinary working people in the countryside had been largely without musical instruments for a couple of generations, prior to the late 1870s.  But what about before?

In the period approximately 1780 to 1850, quite a number of people began writing down collections of tunes.  These were not 'collections' in the sense that they'd gone out collecting them, rather they were mostly tunes from earlier published sources which had migrated over time from the gentry to the countryside, or the urban poor, and been collected together for use by working musicians.  A significant proportion of them were dance tunes.  The fact that so many collections have been found dating from this period indicates at least the possibility that dance music - and therefore dance musicians - was less uncommon than Reg implies.

Certainly, much of what we think of as traditional English country dance and its music, dates, as Reg says, from the 1880's to 1920 period, and not much earlier.  But there is clearly a part of the repertoire - particularly the old hornpipes still favoured for stepdancing - which may be quite a lot earlier.

One of the big surprises in this CD is the number of tracks which have not previously appeared on Topic LPs - 17 of the 29, according to the booklet attributions.  I'm not about to go hunting out where else they may, or may not, have been issued, but it's a fair assumption that around half of the recordings here, though maybe not the musicians and their tunes, will be new to most readers and listeners.

Anyone knowing Reg Hall's history and interests will not be surprised to find Scan Tester (anglo concertina) playing on the first track. 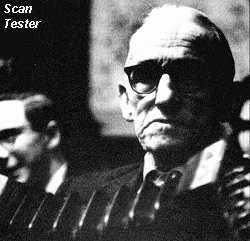 Along with his old friend Rabbity Baxter on tambourine he gives us the Jenny Lind polka and the playing of the two men together is interesting.  Scan, like so many other southern musicians, played 'late' - putting the rhythmic emphasis slightly behind the strict tempo of the music.  When playing with any backup accompaniment, which was usually firmly 'on' the beat, this caused a rhythmic tension which, when well handled, made the music more interesting and exciting.  What's interesting here is that Rabbity plays even 'later' than Scan, creating the same effect, but in a way which is very unusual -

I can't immediately think of another example of this technique, certainly not of a percussionist playing so far behind the beat (sound clip).  Scan also has three other tracks here which have not been heard before.  One is with Rabbity again (Untitled Polka), one is solo (In and Out the Windows / Monkey Hornpipe) and one is with his daughter Daisy Sherlock on piano (Untitled Schottische).  All display the neat, uncluttered, rhythmic playing for which he was so well known.

I'm particularly pleased to be able to hear a good recording (from an EFDSS issue) of Jinky Wells, long-time Bampton Morris squire and fiddler, on track 2.

Village lore has it that he was a good fiddler and this track proves it.  He had the habit of singing or diddling along as he played and you have to tune this out of your consciousness to listen to the fiddling, which is brilliant!  Flowers of Edinburgh (sound clip) is played strict tempo, but the melodic phrasing is absolutely wild, making for a very exciting music.  Any of the current Bampton sides would have trouble dancing the cursed 'Knuckle Down' at this speed and without any of the rhythmic accommodations that their kind musicians provide today!  Bobbing Around, on the other hand, is well behind the beat, and very similar performances could be heard if you went to Bampton next Spring.

Two other Bampton fiddles can be heard for the first time here as well.  Arnold Woodley plays Johnny's so Long at the Fair very well here.  He was a somewhat uneven player, but at his best (does anyone remember him at the second English Country Music Weekend?), he was a very good fiddler, with a style which owed much to Jinky Wells.  Bertie Clark plays Maid of the Mill, Bacca Pipes and Jockey to the Fair - 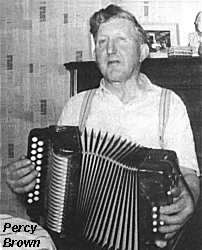 Jockey (sound clip) is interesting in that it's a quite different version of the tune to that used by this side today.  I know Bertie had to learn his tunes from the Cecil Sharp book when he first played for the morris in 1926, but Reg tells us that he re-learned the tunes from Francis Shergold in 1950 when he began to play for that side, and this recording was made in 1958.  The very different 'modern' version of the tune was learned by Jamie Wheeler and myself - and also directly from Francis - in the 1970s.  So who changed what?

and Heel and Toe Polka off Topic's English Country Music from East Anglia LP.  The first is a stand-out performance by any standards (sound clip), all the more remarkable in that he was 70 at the time of recording.  Lovely stuff! 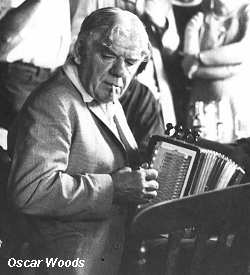 From the same record come the Oscar Woods tracks, the Italian Waltz, and two Untitled Polkas, displaying the lovely, unhurried playing and perfect rhythm he was justly famous for.  Good, honest, Suffolk melodeon playing at its very best, and always the essential ingredient to a perfect evening.

Several tracks from the Boscastle Breakdown album reappear on this volume - apart from the Scan Tester (track 1, above), we hear the Boscastle and Tintagel Players with the eponymous Breakdown (though not the take which appeared there), and the Dorset Trio with the Italian Schottische plus two apparently 'extra' tracks - Hands Across / Four Handed Reel and Sheep Shearing / Untitled Polka, though both sound very familiar to me.  And Billy Cooper gets the Irish Washerwoman / Garry Owen / Rory O'Moore / St Partick's Day medley - its third re-issue.

beautifully cleaned up by the latest technology - Greensleeves / Napoleon's March and Gypsy Hornpipe (sound clip) / Untitled Schottische - and it's much easier to hear what a fine player he was, even at the age of 81.

Pip Whiting also returns with the Earl Soham Slog and its unusual B music (sound clip) from the record of the same name - you'll be able to find out much more about him when the final part of Sing, Say or Pay! is re-published in these pages.

Other tracks include Jack Hyde, Abingdon Morris musician, with Shepherd's Hey on mouthorgan, Bob Cann with Woodland Flowers / Uncle Jim's Barndance, Jimmy Dixon and Ron Watmore (mouthorgans) with Over the Waves / Cuckoo Waltz and Nobody's Darling but Mine / Untitled, Font Watling with Untitled Polka / Golden Slippers / Mick's Tune, Ruth Askew and George Privett with Manchester Hornpipe / Click go the Shears, Bill Kimber with Over the Hills to Glory and a live recording of the Minehead Sailors' Hobby Horse custom.

There's a lot of very good music here and some fine performances, but as I said at the outset, the 'type' format records in this series suffer in comparison to the 'themed' ones in terms of listenablility - and this one most of all.  For anyone with an interest in southern English country music who has not managed to get hold of the vinyl LPs from which about half these tracks derive, this volume is a must.  It's also important for the unreleased material it presents, particularly the Bampton fiddlers.  But, as an life-long lover of this music, I have to concede that this is probably the weakest volume of the whole series - sorry as I am to have to admit it.