Voice of the People - Volume 11 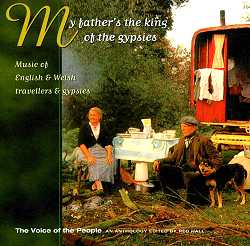 One is first struck by the subtitle of this volume - can it be that there's some Welsh traditional music (other than Phil Tanner, who thought of himself as a Gower man rather than a Weshman) lurking in Topic's vaults?  Sadly not - and this isn't the place to discuss how the Welsh abandoned their traditional music so completely.  The justification of the subtitle, and it's a slim one, is that the wonderful May Bradley (who unaccountably only gets one song here) was born in Chepstow - a town which has been in and out of Wales several times through the re-drawing of political boundaries.  Nor is this really the point, since May Bradley spent most of her life in England.  Admittedly, she spoke Welsh as a girl, but a language is not a culture, as is clearly demonstrated by Peter Ingram, who sings in Anglo-Romani, but in a way which stands out like a sore thumb - missing entirely the stylistic gestalt which unites every other singer on this CD.

The presence of this volume throws up a question about the series: if there's an English and Welsh Travellers record, why isn't there a Scots and Irish one too?  Certainly it's not through any lack of content - such material crops up regularly in almost every other volume in the series.  I'm beginning to feel that this is another example of the problems inherent in this type of programming.  The 'themed album' approach has much to commend it and seems to work well in general, but like most unified field theories begins to break down at the boundaries of its scope.  Thus, we find that the Ballads, Ditties and Music volumes - while containing loads of wonderful music - are not the one and a quarter hours of listening pleasure which Tony Engle was aiming for: there's too little variation, not much light and shade, and far too few surprises on these volumes.

No such problems are encountered with this CD however, and if, like me, you've developed a taste for this sometimes difficult music,

there is a great range of well programmed performances to listen to. 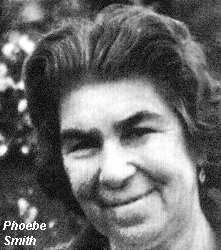 We start, at the top, with Phoebe Smith, who gets three songs - The Yellow Handkerchief, Sweet William (sound clip) and Down by the Tanyard Side.  It's an inevitability that two of these should come from the lifeless performances which Frank Purslow and Paul Carter encouraged in 1969 - both Phoebe and the family were most unhappy with the resulting LP.  The difference between these and the Mike Yates recording of Sweet William is startling, as is the difference between that and Phoebe really going for it in public - a sonic experience which the recording technology of the day was just not up to handling.  Those of us lucky enough to have heard her will just have to make do with our memories.  Phoebe is well served by recordings at the moment, since a new CD has recently been released by Veteran - see our review.

Mention of Mike Yates prompts me to note that almost all the recordings and photos in this volume are his - we would be poorly served for Traveller material were it not for his exemplary work.

Two of the few non-Yates tracks are from local hero Wiggy Smith who sings a great version of There was a Rich Farmer at Sheffield (sound clip) and the very unusual High-Low Well (a much truncated Bitter Withy), both recorded by Gwilym Davies and Paul Burgess.  Reg Hall's mini-biographies give the proper names of performers, where known, and so Wiggy appears as Wisdom (Wiggy) Smith.  This is perfectly correct, though it could be confusing for anyone who's come across recordings of his father, Wisdom Smith, on the old Topic 'Travellers' and 'When Sheepshearing's Done' LPs. 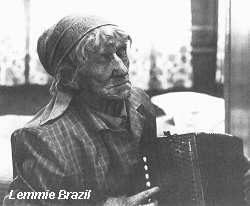 The fact is that, for at least four generations, the eldest son of the family is named Wisdom and they rely on nicknames to differentiate - thus this Wisdom is Wiggy, his son is Figgy and his son remains Wisdom since his great-grandfather is now dead.

Remaining in Gloucestershire, Harry and Lemmie Brazil, though Devon born, settled in this area in 1919 and were very well known to enthusiasts in the '70s and early '80s. Mike Yates was by no means the only person to record them, but may have been the only one to make good recordings like those heard here.  Most of their generation of Travellers would have a few songs,

but Harry thought of himself as a singer and, with his assured performances of songs like Sally Morrow (sound clip) and A Blacksmith Courted Me as examples,

you can see why.  His sister Lemmie was more of a musician than a singer and here, aged around 89, after a very hard life, you can hear that she was still a great melodeon player (sound clip - God Killed the Devil).  There were thirteen brothers and sisters in the family and all were long-lived - Danny, the youngest and only surviving member, is still living in his van at age 87.

Gloucestershire and the Forest of Dean extend southwards down both sides of the river Severn as far as Chepstow, birthplace of the aforementioned May Bradley, and if you head due north from there up the Wye valley, past Monmouth on to Hereford, Leominster, Ludlow and beyond, you will have gone right through the area she travelled for most of her life.  Her mother, Eliza Smith, was recorded by Ella Leather in 1908 in the village of Weobley, about half way between Leominster and Ludlow, and it was in this area too that May subsequently met and became friends with Fred Jordan.  Here she sings Under the Leaves of Life -

rightly described by Reg Hall as a 'spine-chilling performance'. (sound clip).  Despite having been much recorded by Fred Hamer in the '60s, she only appears three times in this series - shame!

Time to move south and east and meet another Smith family - Minty, Levi and Jasper - who travelled around the Surrey and Kent area and based themselves in Leatherhead for the winter in their younger days, though Minty and Levi later stayed more in Kent.  All three are excellent singers and we hear The Basket of Eggs from Minty, The Haymakers, One Penny, The Game of Cards and Georgie from Levi and Father had a Knife, Down in the Meadow, The Small Birds Whistle, The Squire and the Gypsy and a set of melodeon tunes from Jasper.

I'd love to have a sound clip for each of them but space forbids it, so here's Levi with The Haymakers, made familiar by the Coppers as Spring Glee - this has gone through the old Gypsy mill and come out looking much the better for the experience (sound clip).

Down to the deep southwest now to meet some of the huge Orchard clan.  Vic Legg's mother's family were Orchards and you can find out a bit about their life in the early years of this century from Vic's interview with her in our Articles pages.  This CD features Tom Orchard, both 'tuning' (diddling) while his son Tommy stepdances, and playing a version of the Cliffe Hornpipe on the melodeon.  Tommy' wife Jean is the daughter of the truly spellbinding Amy Birch.

This record would be a 'must have' for me on the strength of her two tracks alone - Over Yonder's Hill (sound clip) and Royal Comrade, a version of The Lakes of Coolfin.  I am devastated to find that she appears on no other records in this series, since I'm certain that Sam Richards has recorded her extensively.

Harry Lee is/was something of an enigma.  I can think of almost no other English Traveller fiddler to have appeared on a commercially available recording - and he was a good one too (sound clip - The Breakdown).  He was recorded in Kent, purely by chance, when he was there doing a bit of seasonal work in 1962.  The group of people he was with, who may or may not have been his family, came from around Dunmow in Essex, but later enquiries in that area failed to discover him.  People knew of a fiddler called Harry Lee, or possibly Smith, but not his present whereabouts.  Nothing seems to have been heard of him since - maybe one of our readers will have some further information?

Three more singers need mentioning - again from Kent, Chris Willett, son of the lovely Tom, sings The American Stranger and Once I was a Servant.  He's not the singer his Dad was, but is well worth hearing nonetheless.  Bill Ellson, from south London gives the street cry Will you buy my Sweet Blooming Lavender which shares many lines with that of Phoebe's husband Joe's version on her Veteran CD, and plays Love is Pleasing as a waltz extremely well on mouthorgan.  Mary Ann Haynes was born in Hampshire and travelled throughout most of southern England with occasional 'up country' journeys to the northern horse fairs.  She eventually settled in Brighton, where Mike Yates recorded nearly a hundred songs from her in the '70s.  Here we get The Little Dun Dee, The Colour of Amber and The Young Officer (Outlandish Knight).  She's a great singer in the central southern Traveller tradition perhaps most exemplified by the extraordinary Caroline Hughes - who does not appear on this CD or anywhere in the series.  I know that she's a 'difficult' singer to listen to and that few of the recordings I've heard have been of complete songs, but I would have thought that her stature would demand the inclusion of at least one track in this compilation.

Every track on this CD is a good'n and some are just brilliant - it can be thoroughly recommended, even if you aren't (yet) a Gypsy music enthusiast.