Voice of the People - Volume 14

Troubles they are but few -
Dance tunes and ditties 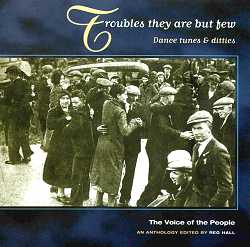 A companion piece to number 7 in this series of essential CDs, the performances here represent the lighter side of the people's voice.  Nearly half the recordings are of dance music, the rest of comic songs and verse.  The words to the songs and the verses display great good humour and often refer to the singer's work or domestic experiences.  As with number 7, the nature of the material rather demands audience reaction whether it be chorus singing or the appreciation shown by laughter and applause, or even the odd comment or two.  As usual with this series, the performances and choice of material are generally excellent - I just wish that more live performances could have been found.  The three examples on offer here are all superb.

You could say that the unidentified singer of A Parody (the parody being of Galway Bay) is the true voice of the people in that he emerged from the crowd, sang, and then disappeared back into it.

He sang this during a session at the Bedford Arms in the late '50s, a session that was recorded by Topic Records, hence the line in the song "The Topic blokes they use it every day".  The barmaid and the landlord get a mention too (sound clip).  The till is ringing, though not obtrusively throughout, which is probably why we've never heard this track before.  What a delightful, gentle voice he has and what a delicious parody it is - half the usual stuff about a woman with a mouth as big as Galway Bay and half a jokey complaint about the contemporary prevalence of the original, "a product of Tin Pan Alley and at that time every Englishman's idea of an Irish song (and) generally despised by the traditional musicians who frequented The Bedford".  His audience is clearly delighted by the song.  He has an accompaniment on the banjo by Margaret Barry in her capacity as resident musician.  I only wish I could grasp what she says at the song's end.

Martin Gorman sings It's Nowt To Do With Me before an audience in the clubroom at The Fox, Islington Green in 1966 - the same session as the other two wonderful recordings of him in this series.  He is clearly a great performer and it must have been a good evening!  This I assume to be the standard version of the song, it being not directed at anyone in particular; it is usually targeted at individual members of the audience or community who come in for a gentle ribbing.  The song stands very well here as it is.

Jack Elliott sings Old Johnny Booger recorded in the clubroom at The Barley Mow, Birtley, Co Durham in the '60s.  One of the joys of this series of CDs is that you are constantly reminded of just how great some singers were when they were at the top of their form - Phil Tanner, Fred Jordan, to name but two, and this man, Jack Elliott.  Now this may seem a very simple song melodically, but just cock an ear to the dynamics of his singing, his rhythms and cadences.  This one simple song is an absolute joy.  The sleeve notes tell us: "The basic requirement for making a decent traditional song out of something from the stage

is that it should have been only partly remembered and then reconstructed!"  That sounds a bit cold-blooded, but is nevertheless often the case.  This song apparently started out as a black-face minstrel song although you wouldn't know it in it's present form (sound clip).

The remaining English singers here all turn in uniformly excellent performances - from Sussex's Charlie Potter's charming rendition of Sing Ivy to Johnny Doughty's hilarious I'm Going to be Mother Today, complete with expletives deleted.  This must be from the music hall and Reg Hall is right in his notes to point out the connection between Johnny Doughty and Max Miller.  More music hall origin (or perhaps 78rpm record) is evident in Harry Upton's I Am a Donkey Driver and George Spicer's I Wish There Was No Prisons.  I wish he had remembered more of it - this has the makings of a good number.  The Derby Miller is sung by Jumbo Brightwell from Suffolk, that hot-bed of classy singing.  Walter Pardon turns in his usual impeccable performance in the amusing Hungry Army and there is an intriguing track consisting of several bits and pieces from various travellers - a street song from Ray Driscoll, some inspired nonsense from Albert Smith and some diddling from Albert and Jasper Smith of the step-dance tune Pigeon on the Gate and the jig St Patrick's Day.  The diddling of tunes was common when no musician was available and an astounding example here is Phil Tanner who gives a virtuoso performance diddling The Four Hand Reel (Pigeon on the Gate in disguise!)

Jimmy McBeath is given two tracks - Hieland Rory with its amusing wordplay on titles of tunes and songs, and Johnny McIndoe, a comic narrative packed with plays on rhymes and rhythms.  As usual, there's a fight; as usual, the law arrives in the last verse.  Willie Kemp and Curly MacKay, the latter on piano accordion give us (and my heart sank at the very thought of this) The Ball O'Kerriemeer.  Readers of my review of number 7 in this series will remember my dislike of this item.  I have to say that this is better than John MacDonald's version - each chorus here at least continues the action of the relevant verse and it makes for a slightly more interesting song.  I still don't think it's funny.  Kemp (proving to be a mean ocarina player) and MacKay also play the set MacKenzie Highlanders/The Inverness Gathering.

There is another recording of this latter tune on the CD, this time played on the mouth organ by Donald Davidson - an absolutely terrific piece of playing and one of the highlights of the album (sound clip).  Davidson is one of these intriguing people about whom nothing can be found apart from the fact that he recorded some 78s in the '30s.  That other and more well known master of the moothie, Will Atkinson, plays up a storm on the jigs Tell Her I Am and Teviot Brig.  He is joined by Willie Taylor and Joe Hutton on fiddle and Northumbrian pipes for a great set of tunes recorded live at the National Festival, Sutton Bonnington.

The highly regarded (and justly so) melodeon player Percy Brown plays Old Joe, The Boat is Going Over and an untitled polka and another great melodeon player, Font Watling plays Pigeon on the Gate while Wattie Wright step-dances.  Michael Grogan is a name new to me, even though he was once regarded as one of the top Irish accordeon players.  Here he plays two jigs, and while technically very good, I am afraid I remained unmoved.  I much prefer Julia Clifford's more relaxed approach to her Kerry polkas.  Ned Pearson, a fiddler from Northumberland, turns in interesting and unusual versions of The Heel and Toe Polka and The Morpeth Rant.  The CD starts and finishes in great style - firstly with Eddie Corcoran and Seamus Tansey playing reels on tin-whistle and tambourine (an unusual performance on the tin-whistle here, with much bending of notes) and lastly with Gargan's Athlone Accordeon Band (actually only two accordeons and a drummer) rattling through Soldier's Joy for all they are worth.

Of the three Irish singers here, all their songs are unusual in their own way.  Mikeen McCarthy and Austin Flanagan turn in singular versions of The Herring and The Barley Grain respectively , the latter being an excellent version of John Barleycorn.  The number by Margaret Barry and Michael Gorman - The Leprechaun - is unusual in that I simply don't like it.  It was written in 1873 by P W Joyce, a collector of Irish songs and strikes me as a piece of blarney that would appeal to the easily satisfied English listener - which brings us right back to Galway Bay.  Still, 28 tracks and only one duffer.  I can't like everything, you know.