Note: Place cursor on graphics for citation and further information.
Sound clips are shown by the name of the song being in underlined bold italic red text.  Click the name and your installed MP3 player will start.
'... rather liltingly scraped' : Frank Smith, Romany fiddler 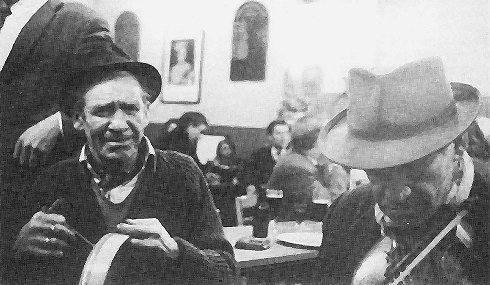 My notes for MTCD373 Boshamengro: English Gypsy musicians, the initial impetus for which had been a desire to make all Paul Carter's recordings of fiddler Harry Lee available at long last to such other enthusiasts as there might be for that sort of thing, included not only Dave Nuttall's 1968 photograph of Harry's cousins by marriage' Frank Smith and his brother Bill 'Mousey' Smith which had originally appeared in Reg Hall's I never played to many posh dances (reproduced above), but also quoted at some length from Marjorie Mack's book Hannaboys Farm (1942).  The passages I quoted from that book were of interest because close personal observations of a Romany fiddler seldom appear in print, though Frank Smith was obviously known well enough to his extended family, of course, and is referred to in Rosie Smith's and Lindsey Marsh's family memoir Old ways, new days (Francis Boutle, 2009).

Memories of Frank Smith's playing vary among those who heard him, but Marjorie Mack seems to suggest that he was not only a keen fiddler but 'scraped … rather liltingly' to boot:

It was Frankie who was my first introduction to the didekais, the first with whom I ever got on terms of acquaintance, however expostulating or unwilling.  His battered, unshaven and rather beery young face appeared over our front gate one day, and the first thing I knew of it was a fiddle being scraped, and yet rather liltingly scraped, somewhere in the direction of the road ... "I tune my fiddle the Travellers' way", Frankie admitted, and tried to demonstrate, but with one string missing it wasn't easy to follow.

And on a subsequent occasion:

And then - it was Christmas morning in the year 1937 - when Frankie, who had sported no musical instrument for some time, appeared with a mouth organ and his son Billy, now about five, who, he declared, could play the tambourine.  Not only could but would, and in another minute they were at it, scattering upon the winter morning as melancholy and strange and, considering the medium, as lovely a collection as notes as one would hear in a month of Sundays.

"But tell you what, lidy", continued Frankie "if you want to find some old fiddle for me - it needn't only be an old one - I'd come round other times and play you tunes.  'Cos it's the fiddle that I play and not this", and he glanced with derogatory looks at the spittle-bespattered surface of his mouth organ.  "The fiddle's my music", he repeated.

When Marjorie Mack eventually obtained a fiddle for Frankie she relates "never am I likely to forget that moment of rapture".  Sad to say, an injury to one of his fingers had become septic - he eventually lost part of it - and he couldn't play the fiddle then or for some while afterwards, but subsequently the author reported:

Latterly I have heard from Jasper [Jasper Smith, Minty Smith's brother and thus Frankie Smith's brother-in-law] that he is playing his fiddle again - is always playing it;

Whether Jasper's reference to Frankie Smith's 'always playing' the fiddle was uttered with either enthusiasm or despair is not recorded.

In a recent letter published in Musical Traditions (14.7.17) Mike Yates draws attention to the frequent and often frustrating appearance of new material following the appearance of an article or book - in his case it was his own discovery of a recording which threw light on a song on When Cecil Left the Mountains (MTCD311).  In my own case it was the revelation by Paul Roberts in his review of MTCD373 in these pages that Ken Stubbs had recorded Frank Smith playing both the fiddle and the melodeon.  My initial thought was that Boshamengro was surely the poorer for having been released before this 'discovery': I myself had drawn a blank when looking into the possibility that Frank Smith might have been recorded, but it turns out my instincts were right.  However, the quality of the recording and the constraints placed on the performances by the circumstances (I suspect 'drink had been taken') soon put my mind at rest.  Which isn't to say the recordings aren't a fascinating record of the occasion: quite the contrary.

Other musicians featured on the recording include not only the aforesaid Jasper Smith, but also Wally Smith (possibly the man of that name who was the son of the celebrated step-dancer Billy 'the Pro' Smith, and if so a cousin of Jasper Smith and of Harry Lee's wife Sarah), and Jeff Smith (perhaps Geoffrey Smith, who may also have been related to Jasper et al).  It is quite possible that Jasper Smith and other members of his family were the 'family of Smiths, who were hot on the tambourine and mouth organ' so described by Reg Hall, presumably quoting Ken Stubbs himself, in the notes to Boscastle Breakdown in connection with an occasion immediately prior to Ken and Steve Pennell's encounter with Harry Lee in the company of Paul Carter and the recordings which the latter made of Harry Lee in October 1962.  Ken Stubbs' recording of Frank Smith apparently also date from the early 1960s, and may well have formed part of the same 'campaign'.

Frank Smith himself was recorded playing snatches of the following tunes (the identifications are probably by Ken Stubbs [with my two-ha'pence in square brackets], which isn't to say Frank Smith didn't know any of them):


Of these, the Monkey Hornpipe was also the name which Scan Tester gave to the Sailor's/College Hornpipe (probably because of the Cossack-style squatting 'dance' associated with it), which might have prompted Ken's identification (if it is his), and the Unfortunate Sailor was played as an air rather than as a waltz.  It should perhaps be noted that many of these items - Sailor's Hornpipe, Daisy Bell, Brighton Camp, Davy Crocket - were not survivals, despite (in the case of the first three named) their age, but would at that time still have been familiar to all and sundry, that familiarity having been reinforced throughout the 20th century in the cinema, on the television and on the radio.  The inclusion of the fourth tune - Davy Crocket underlines the fact that Frank Smith's repertoire was current rather than retrospective.

Paul Roberts has identified Harry' Lee's You'll have no mother to guide you, with a song called There'll come a time (whose original chorus contains the line 'You'll have no father to guide you'), a version of which was recorded by Charlie Poole and his North Carolina Ramblers for Columbia in the 1920s (Columbia 15116-D), though he sang 'Papa' rather than 'father'.  (At the time of writing the complete lyrics can be found at http://www.oldielyrics.com/lyrics/charlie_poole/therell_come_a_time_someday.html.

Frank Smith's 'unnamed air' isn't mentioned on Ken's own index card to his original cassette, but turns out to be the very tune which Frankie Smith played for Marjory Mack on the mouth-organ on Christmas Day 1937, her annotation of which appears in her book:

On that occasion Frankie had told her the tune was called "The Song that was sung".  When pressed for the words he had said they were in Romany, but provided four lines, which Marjorie Mack took down as follows:

My old mammy, she owed me no grueful spite.
She sank three robbers all in one night.
She stole from the rich to give to the poor,
Now my tender old mammy she ain't seen no more

Frankie also expanded the title to 'The Song that was sung was Old Ireland free', a phrase which is commonly associated with the song The Croppy Boy.


These form part of Jasper Smith's version of The Famous Flower of Serving Men (Roud 199, Child 106), in which they follow a verse which is well nigh identical to the opening verse of The Croppy Boy:

Yes, it's early, oh, early, oh, in the spring
The small birds whistled and they gently sing
They changed their voices, oh, from tree to tree
And the song that they sung was Old Ireland's free
[Topic TSCD 661, Track 22]

Jasper Smith sang his song to the same tune as that of Frank Smith's 'Old Romany Song', and Caroline Hughes similarly used the tune for and inserted the same verse into her version of the Famous Flower of Serving Men, though for her the song the small birds sang was 'Home, Sweet Home' [MTCD365-6, Side 1 Track 42].

When he played the tune for Ken Stubbs many years later Frank Smith again referred to it as "an old Romany song" The Song that was Sung.

Interestingly, another Kentish traveler, Charlie Scamp (Phoebe Smith's brother) used the tune for his version of Sweet William, which is sometimes referred to as Come father, father, build/buy me a boat, the first line of what is more often the second version, the first verse commencing 'Twas early, early, all in the spring, which words might have suggested the use of the tune under consideration to Charlie Scamp for his song [FTX-140].

Reaction to the recordings will certainly sort out the sheep from the goats (though I'm not sure which are which).  On initial hearing Frank Smith may seem to have a rather haphazard approach to his fiddling, but repeated listening soon dispels such misgivings: his fingering and bowing are clearly deliberate, and repeated each time through a tune.  And though perhaps lacking in finesse, he plays with panache and, in his way, not inelegantly: Brighton Camp (Note the way in which he repeats the first four bars of the B music, much as both Harry Lee and Jasper Smith do in their renditions of Flowers of Edinburgh).

As we have seen, his airs are also delivered with no small degree of sensitivity.  Such features, however, are disguised by his approach to articulation (the purchase which the bow makes on the strings).  This was not an uncommon trait among older generations of traditional fiddlers recorded in some parts of England in the 20th century.  The fact that it's never referred to by the early 20th century collectors - who were interested in tunes rather than technique - may reflect their acceptance of it as normal among the fiddlers they sought out.  It was certainly acceptable to an audience which grew up with it.  Indeed, in the 1980s a young traveller described it to me as 'playing properly', and the author Laurie Lee described it to Bernie Cherry as the 'old way' of playing.  Given that it's unlikely that fiddlers would abandon tense articulation en masse, it seems reasonable to assume that the trait is old.  Be that as it may, it's easy to see what Marjorie Mack - herself a musician - meant when she described meeting Frankie Smith for the first time and hearing 'a fiddle being scraped, and yet rather liltingly scraped'.

But let's leave the last word to Frank Smith himself: Sailor's Hornpipe

I am indebted to members of Frank Smith's family for sharing their interest in his music, to Jeremy Harte of Bourne Hall Museum, Ewell (Surrey), and the Romany and Traveller Family History Society for drawing my attention to Marjorie Mack's book, to Paul Roberts for drawing my attention to Ken Stubbs' recordings, to Mike Yates and Keith Chandler for the benefit of their vast knowledge, to Steve Pennells and David Nuttall for sharing their memories of Ken Stubbs' forays into the musical world of the Romany traveller, and to Chris and Jean Addison, who are the ultimate source and custodians of Ken's recordings.