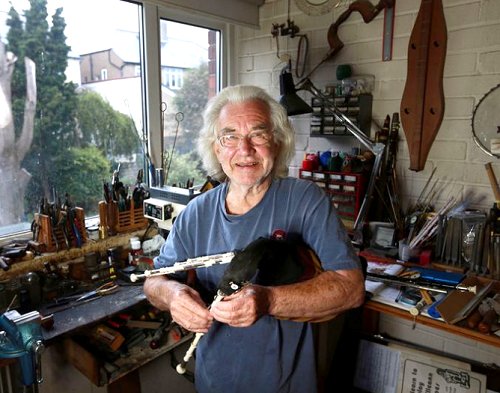 On 27th May 2019 my friend and musical colleague, Colin Ross, died in Whitley Bay hospital after a brief illness.  We played together for 60 years . I would like to share with you some of my memories of this great man.

We first met in 1959 when he visited Newcastle Folk Song and Ballad Club in Newcastle, playing the fiddle for Monkseaton Sword Dance Team.  After the event we asked him to become a member of our resident team of performers, to which he agreed, albeit reluctantly. Bringing his repertoire of dance tunes and Northumbrian pipes melodies to the evenings was new and welcome.  As the years went on, he brought along his pipes, as well as piping friends like Forster Charlton who also played the fiddle.  It was great to hear the use of instruments other than guitars and banjos for song accompaniments, or as melody instruments

By 1961 Topic records had invited Colin, me, and Louis Killen to record some of our music, thus getting the small pipes a wider audience for the first time.  Inquiries kept coming about the pipes as a result and Colin decided to start making his own sets later that year.  Having a degree in sculpture he quickly mastered the craft involved, and embarked on a mission to make sets in standard pitches, enabling pipers to play together more tunefully.

As well as the instrument making, he continued his career as an arts lecturer, and married Ray Fisher, the prominent Scottish singer in 1962.  They lived in Monkseaton, with Ray becoming a welcome addition to the Folksong Club team.

A band evolved from the club residents appearing on Thursday song nights, and providing music for the Tuesday ceilidhes, at the new venue, The Bridge Hotel.  Colin was at the helm, having experience of performing at correct tempos for dancing, and a huge repertoire of suitable tunes.

The band eventually evolved into The High Level Ranters playing at clubs , concerts, and Festivals in many places.  They produced 13 recordings (LPs and CDs) over the years until 2015.The members included Colin, Forster Charlton, Tom Gilfellon, Alistair Anderson and myself at the start, becoming four when Forster found the touring hard work.  After 12 years it changed again when Tom and Alistair left to do solo careers.  The next line up was Colin and me, Jim Hall, and Peter Wood, and then the Trio when Peter got married.

Colin made great progress with the pipes, going full time as a maker in 1978, and having a powerful influence in the Northumbrian Pipers' Society to promote the instrument.  He invented Scottish small pipes, bellows blown, using a keyless chanter similar to the Highland pipes (for pipers who had lost their 'puff')

What of playing beside the great man?  We had a special empathy, being able to feel how to adapt to each other's playing to suit the occasion.  Often I could hear a few notes from him and join in straight away, without the tune name being mentioned!  We could slow down, speed up, play loud or quiet, to suit dancers, and alter vocal accompaniments to fit a singer (and even cheekily play behind club guests without being asked!)  He often sent scribbled melodies, which had to be quickly absorbed to band sets, arranging them as we played.

Serious practising was only for pre-recording, TV or Radio.  The rest of the time it was mainly on the 'hoof' while relaxing at informal sessions.  He had a mischevious sense of humour.  Doctor in the mummers play with Gladstone bag and table tennis balls.  Hiding Tommy's guitar when he left it with us to pursue a fair lady.  Holding a red backed spider (poisonous) aloft on the end of his fiddle bow and chasing us around the yard at Alice Springs.  Playing the wrong tune for Forster Charlton at the start of a dance.

The two of us went to Norway together working in the Schools for a month, from Trondheim to the Arctic Circle in the 1970s (employed by their education authority).  The beer prices were expensive, so in the evenings while staying in the B&Bs he decided to teach me to read music, by writing out tunes.  It worked well, a much needed skill!  On the same trip he mistook the silver coffee pot for a similar vessel containing moonshine.  This made playing Mozart duets with the Norwegian hosts very difficult!(I just busked on the piano...  Mozart had some pretty easy chords, like Irish fiddle tunes!)  Colin had a very quick ear and could busk away, too, joining in with tunes at the first hearing.

He did however love his music, in all its forms, and could be quite outspoken when the tune was being played wrongly by others, for which I had to respect.  He could play many instruments; fiddle,viola, Northumbrian pipes, melodeon, flute, tin whistle, Hardanger fiddle, Highland pipes, and Border pipes.  One of his early claims to fame was playing with the Hong Kong Sinfonia when doing his National Service there.

When travelling abroad, often with Ray, he would arrange convenient stops to visit other pipers to 'fettle' their sets.  It was a painful blow for him when Ray died in 2011.  I recall the proud moment when they received their Gold Badges from the English Folk Dance and Song Society at the Bridge in its 50th anniversary year, 2008.

Illness pursued him several times, with a major heart by- pass, and two strokes, yet he determined to continue making his wonderful sets of pipes right up to the end .The great legacy he left behind is found in the recordings of his playing, the memories of his generosity to those whom he freely gave his time and enthusiasm, and most of all ... those 300 sets of pipes he made, which will be playing for all time.