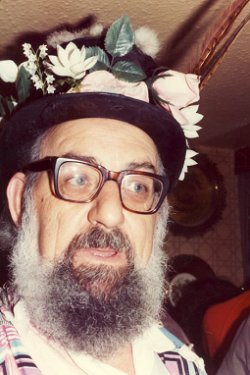 I am sorry to bring you the sad news of the death of Len Berry.  He died in hospital in Wrexham on Christmas Day from pneumonia, and had been in a care home suffering from Alzheimer's for some time.  He leaves behind his wife Barbara in Chirk, Clwyd, to where they had retired in the 1990s, and sons Peter and Bob and families.

Len and Barbara moved to Kirtlington in the early 1950s, and were well known on the Oxfordshire folk scene and beyond as the Portway Pedlars.  They performed traditional English folk songs, Barbara singing and playing the accordion and Len singing in his powerful voice.  They ran folk sessions in the old wooden village hall, and in 1979 Len was contacted via the vicar by Paul Davenport from Doncaster, who had written a paper on the long lost Kirtlington tradition of morris dancing, and who wanted to try to revive it in its home village.

They had come to the right person.  Not only was Len already involved in the folk world, but he was also leader of the Kirtlington Scouts, who would form the core of the Kirtlington morris dance revival side.  Len and Barbara had a friend in the folk world, Tim Radford, also a singer but more importantly in this context, a dancer with Adderbury Morris, and who had helped rebuild the tradition there.  Meanwhile Barbara was an accomplished musician, able to compose or adapt suitable tunes for dancing.

Paul brought his side, Green Oak Morris, to the Lamb Ale in 1979, where they demonstrated the 'new' Kirtlington tradition, Tim brought Adderbury Morris and the two sides danced around the village and of course at the pubs.  Interest was aroused, and the fledgling Kirtlington side, driven by Len's enthusiasm, was coached by Tim, using Paul's notes, with Paul occasionally visiting from Yorkshire to check on progress over the following year.  Len was made Squire of Kirtlington Morris - a traditional post involving leading the team in public, making announcements and being the figurehead of the side, which he naturally did very well, being larger than life, with his bushy whiskers and top hat decorated with flowers, fur and feathers.

One year later, in 1980, Kirtlington Morris Men were able to perform five dances in the new tradition at Lamb Ale, and the local side was reborn.  Len remained Squire until the early 1990s, and press photos at the time always featured Len leading the procession of morris dancers round the village as the Kirtlington Lamb Ale Morris Festival became firmly established on the traditional folk calendar.  And our repertoire of dances has continued to grow - we now have around 30 dances to choose from, still including the original five from 1979.

Len and Barbara retired to Chirk in the mid 1990s, but continued to visit at Lamb Ale every year until about 2005, as travelling long distances became more difficult.  Their retirement was made more comfortable when a song that Barbara had written in the 1970s became a posthumous hit for American folk singer Eva Cassidy, and they were able to give up offering bed & breakfast to make ends meet!  Kirtlington Morris visited Len and Barbara in Chirk in 2010 when Len first became ill with Alzheimer's, but he was overjoyed to see us and was still mostly his old self.  We had begun to plan another visit this year, for their 60th wedding anniversary in November.

There will be many singers and musicians amongst the mourners at Len's funeral on 20th January in Chirk, including a full complement of Kirtlington Morris, but we are under instruction that this will be a celebration of Len's life, so there will be dancing and singing as ever.  There also plans afoot for a memorial concert in Kirtlington later this year.