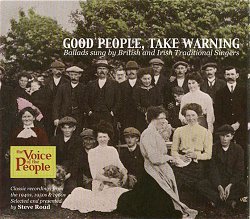 This is the first of the new Voice of the People Series CDs that I've reviewed, and if the rest of these new releases are up to this standard, we're in for another feast of glorious singing.  The four just-released offerings make it clear that while some aspects of the first Series remain the same, there's quite a lot that is different.  Only two of the new ones are singles - one's a double, and this present volume is a triple.  The thematic approach of the earlier Series is not entirely retained (one is just the work of one singer), and the others appear to be more 'grouped' than themed.  Gone are the 'super' jewel cases - replaced by 15mm thick card slip-cases - containing both a substantial booklet and the CD in a single or double normal jewel case or, with the present one, a triple digipak.  I think this may be an improvement ... but time and usage will tell.

The booklet starts with Reg Hall's new, improved Introduction - to the Series as a whole, to the new releases, to the concept of 'traditional music and song', and to the compiler of each CD set (Steve Roud in this case).  It is quite as good and complete as we have come to expect from Dr Hall.  This volume then has a long introductory piece from Steve, on the idea and history of the Ballad.  It all boils down to a couple of nice phrases: a ballad is a song which tells a story; and Child Ballads are 'costume drama', while broadside ballads are 'soap opera'.  Couldn't have put it better myself!

Another thing we find from the introductory piece is that, since this volume is dedicated to ballads, there will be rather more detailed notes on those ballads than upon the singers.  This approach flies in the face of the booklets to the earlier 20 CDs, where Reg Hall was at pains to emphasise the importance of the performer over what was performed.  You may recall that they had virtually no song notes at all - prompting Mike Yates to write some; now included in the VotP Suite of pages in MT.  What changed Reg's mind in this instance is not discussed in the booklet, but he seemed happy enough about it at the launch in C# House on the 15th March.

The approach varies between the four new VotP volumes: Shirley Collins provides some brief song notes in her Gypsy double CD, none at all in the Southern English Singers disc; I provided a hefty biography of Sarah Makem, but also individual song notes; Steve Roud has opted for very brief biographical pieces on the singers, and often hefty notes on the ballads.  So the unified approach of the earlier series is now modified by the preferences of the individual compilers - at least you know who to blame if you don't like what they've done!

There follows a series of these micro-biographies of the singers whose songs we shall hear on the CDs.  This seems to be something of a relapse on Topic's part - they used to put all the song notes together, rather than with the song texts later in the booklets.  Mercifully, this changed a few years ago - but, by the same token, it would seem more useful if the micro-biography of, say, Phoebe Smith, appeared with the first instance of one of her songs at track 18 on CD1, rather than having to turn back 40 pages in the booklet to find it!

Enough of the booklet - what of the 61 songs spread over these three CDs?  Perhaps the first thing to say is that there are far more female singers than is usual on a traditional singers' compilation.  Steve Roud tell us that this was intentional on his part - an attempt to re-balance the picture - which was aided by the fact that Peter Kennedy (whose recordings make up the great majority of tracks on these new VotP issues) actually recorded far more female singes than was usual at the time.  A good point to remember in our appraisal of the importance of this often controversial figure.  Roud also alerts us to the fact that we'll find relatively few recordings by the 'big names' of ballad singing here - since many of their performances already appear in other CD publications.

Rather obviously, I'm not about to comment on each song - I'll stick to citing those which particularly impress or interest me.  We start CD 1, gloriously, with Bob and Ron Copper singing The Bold Fisherman; Steve's notes refute the notion of this being descended from an allegorical medieval original, pointing out that its earliest appearance is in the first decades of the 19th century.  The lovely Maggie Murphy (Chambers as she was then) gives us Doran 's Ass, a splendid humorous song I'd never heard before, and Ben Butcher sings a woefully short version of Sheffield Park, to a gorgeous broken-time tune.  I'd have loved to hear more of him, but this is his only song here.  For those of you who crave one of the big ones: Jeannie Robertson sings a ten minute Johnnie Cock (Johnnie o' Breadislee) most effectively; Sarah Makem gives a lovely Carolina and the Sailor; Lucy Stewart sings The Jolly Beggar; and Thomas Moran, The Blind Beggar's Daughter.

To return to somewhat smaller and lighter stories, Maureen Melly gives us a delightful Trip [we took] Over the Mountain, while Margaret Jeffrey (a Scottish Traveller recorded on the berryfields of Blair) sings When I Was a Young Maid (The Female Drummer) to a great and lively tune I've never heard before to this well-known song.  Sandwiched between them is Phoebe Smith with The Oxford Girl - unsurpassable!

On CD 2 we find a few more lighter songs: Harry Cox gives one of the best versions of The Crabfish - although it does miss the hilarious "Yes Sir, yes Sir, I've got two - one is for you and the other is for me" line; Mary Toner has a lively Jogging up to Claudy (in the sour milk cart); but we have to wait 'til track 21 before the dark clouds of heavy balladry part, revealing an absolutely brilliant Michael Gallagher, with The Devil and the Bailiff.  This is not, of course, to dismiss the heavy (or long) stuff but, as you'll see from the tracklist above, it's all fairly well-known.  Though special mention should be made of Mary Doran's Oxford City - real Irish Traveller singing at its best, and of Her Servant Man, sung by Gladys Stone - a Sussex singer so little known that she doesn't even got a micro-biography!  She's really good - I hope there's more of her somewhere in the Kennedy archive.

On CD 3 Maggie Chambers (Murphy) starts us off well with a very full version of The Banks of the Silvery Tide, sung to the tune of Skibbereen, followed by an equally good and lively Hungry Fox from Bob and Ron Copper - great to find the Coppers here, since they were, unaccountably, missing from the earlier VotP series.  Peter Donnelly, from Co Tyrone, sings a very full (12 verse) version of the rare ballad John McCann (Charming Mary Neill) - and he is a great story teller.  The next track, The Dowie Dens o' Yarrow, was a bit of a shock when I first heard it - I thought it was a very young Belle Stewart ... but it is actually her daughter-in-law, Mary Anne Stewart; lovely singing of a great song.  Next, Harry Cox sings The Squire and the Gypsy; a great favourite in this family.  Like Bob Dylan's early ballads, it seems incoherent and fragmented - but by the end you know exactly what's happened.  Steve Roud tells us that only two traditional versions are known, and that the few broadside versions are much longer and set in very flowery language.  Somewhere along the way, someone has taken all the best lines, re-ordered them, and produced a far superior piece of work.

A great delight is Willie Lennix, sung by Joe Moran, a young boy from Co Antrim - and one is reminded of the 'unknown boy' who sang Four Green Fields so effectively on Come West Along the Road, or indeed of seven-year-old Sheila Smith singing Dear Father Pray Build Me a Boat on the Gypsy double CD in this series - although she was much younger.  We tend to think that age and experience is needed to sing these songs well, so it's good to be reminded that there are a few young people who can do it, too, out of pure natural ability.

Talking of age and experience, Sam Larner gives us an uncharacteristically subdued Pretty Polly (Cruel Ship's Carpenter), which it would be hard to beat, and Fred Jordan sings Six Pretty Maids (The Outlandish Knight) which is equally unbeatable - unless you've been lucky enough to hear Corney McDaid's splendid version from Inís Eoghaín.

OK - enough!  I haven't mentioned lots of splendid singing of some of the more well-known ballads, or many of the more well-known singers to be found in this splendid selection ... they are all wonderful, but there's only a limited space and time, not to mention the limits of your patience!  I applaud Steve Roud's selection, ranging from Barbara Allen to Butter and Cheese and All; from Jeannie Robertson to Joe Moran; from the 10-minute Johnnie Cock to the 1-minute Two Pretty Boys.  The only real disappointment was Phil Tanner's The Bonny Bunch of Roses - a splendid and favourite ballad from a superb singer, delivered with no apparent feeling or commitment whatsoever!

The booklet is extremely good in almost all respects - particularly Steve's song notes - although a few of the transcriptions have little errors in them, and there are several occasions where verses are joined together when they should be separate.  But let's not be too picky - this is an excellent piece of work, crammed full of great ballads, well told.  Congratulations to all concerned.