Let me say first that I think this is the most interesting record from Greater Italy I have ever heard.  Its 25 tracks encompass the music of 24 different Sardinian dances.  I don't know how many distinctly different dance forms Sardinian culture supports - the fact that this CD is Volume 1 leads me to hope that there are more.  But if not, and Volume 2 is just further examples of the same forms, I will look forward to Volumes 2, 3, 4 ... with the same enthusiasm I have for the current offering.

Not only is there a great variety of dance music to be heard here, but the manner of the performance and the personnel involved are quite diverse. 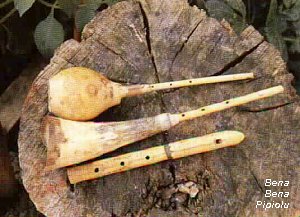 We have bands playing a variety of instruments; accordion, guitar, tambourine, triangle, trunfa (jew's harp), pipiolu (whistle), bena (a folk oboe of the pibcorn type), serraggia (bow harp), not to mention the human voice.  Then there are the solo players - principally of the accordion, melodeon, and of course, the launeddas - the justly famous Sardinian triple pipe.  And if that were not enough, we also have the human voice as a dance instrument, ranging from a single male soloist to the full cantu á tenores group.

I think that the recent history of Sardinian musical culture has been similar to that of Ireland - in that, as it declined as an everyday part of life in the villages, it was taken up by the younger generation as a practice having its own raison d'être.  As the booklet notes state:

In the past twenty years, however, the tendency in many villages to form folk-dance groups has gradually been destroying the custom of dancing in the village square.  As a result, the old folks have delegated the joy of collective dancing (a ritual which united the whole group) to a small group of young people who, decked out in folk costume, perform a virtuoso exhibition on a platform to an audience which applauds but which has been dispossessed of its reason to dance. 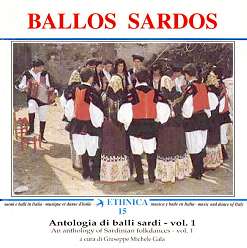 This seems very sad, when presented as baldly as this, but it must be seen as a response to the changing nature of community life in the late twentieth century.  Maybe we should be pleased that the tradition has been able to adapt.  Perhaps the difference here was that the village music was still vibrant at the time the change began, so there was no real 'revival' in the sense that we know it in these islands.  Nor is there the marked stylistic disparity between traditional and revival performance with which we are familiar - only one of context.

Musical events still take place in the villages, at carnevale and other festive occasions.  There are competitions and other types of spettacoli, but they tend to be for attendance rather than participation, as far as the ordinary population is concerned.

As a consequence, many of the performers to be heard in this CD might be considered to be 'revivalists' for reasons of context and self-awareness.  Yet the difference between these performances and those traditional ones I have heard is very slight - perhaps a hint more urgency and panache is evident in the modern examples.  This makes for a CD which is easier to listen to without, for me in this instance, detracting from its quality.

And it is the quality of many of these performances which is so impressive.  Perhaps because of the distancing from closed communal life with its attendant interpersonal strife, rivalries and introspection, the best players are far more widely heard these days than was sometimes the case in the past. Thus we have performances, mostly recorded live, of some of the top names in the field; Totore Chessa and Mondo Vercellino on melodeon, and Dionigi Burranca and Giovanni Casu on launeddas. 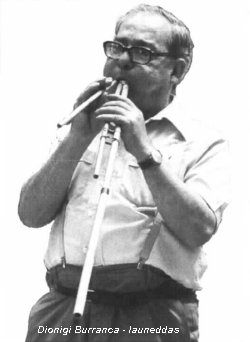 Chessa and Vercellino are fabulous players, and nicely contrast the crisp modern style of the former, aged 40 (sound clip),

with the older, more florid approach of the latter, aged 65 (sound clip).  Yet I think I was most impressed by 27 year old Maurizio Loi's

While most of the tracks have been recorded in the last couple of years, the two principal launeddas players, mentioned above, are heard on recordings made in the late '80s.

Burranca was 75 at the time, whilst Casu was 54 - and it sounds almost inconceivable that his Ballu Campidanesu (sound clip) could have been played on only one instrument!  I would imagine that the time taken to master the triple pipe, and its attendant requirement for circular breathing, might mean that the maestros are all older men.  Nonetheless, there is one track of an extraordinary band featuring four launeddas players, one of whom is 32, and two only 25 years of age.  So it would seem that the playing of this most quintessential Sardinian instrument still continues - thank goodness. 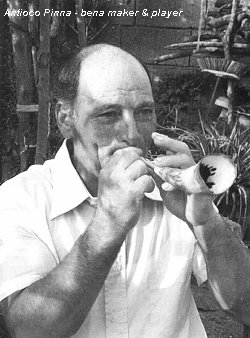 Leaving the best 'til last, we come to the cantu á tenores groups.

There are two of these from the central Barbagia area, one from Oliena (sound clip), and one from Oniferi - with 2 tracks each. And I am overjoyed to be able to report that these modern performances equal or surpass those 1979/85 Bernard Lortat-Jacob Chant du Monde benchmarks.  Forget Tenores di Bitti - listen to these guys!  One of the most exciting characteristics of á tenores singing is the semitone key changes up and down between groups of verses.  In all the examples I have heard before,

the lead singer pitches up or down at the start of the verse.  The boche from Oniferi sings through the pitch change in the course of the verse (sound clip).  Phenomenal!

Given that there are 25 tracks, I don't think I should attempt a track-by-track analysis for what it undoubtedly a minority-interest release - even within our esoteric yet eclectic readership!  Suffice it to say that virtually every other track is as worthwhile in content, interest, excitement and level of performance as those I have already mentioned.  My congratulations to Giuseppe Michele Gala of Associazione Culturale Taranta, who did the research, collection, recording, notes - and is series editor.  We hope to have a review of the whole of the Taranta catalogue - by an Italian - in the near future ... (but we are, I fear, still waiting!).

This great CD is available in the UK from MT at our Records page.