Ballads and Songs of Tradition

One of the first albums that I bought was on the Folk Legacy label, Sara Grey's Songs & Ballads in the mid-sixties (and if the forgotten person who I loaned it to many years ago is reading this, I'd like it back please!)  Since then I have only had a fleeting association with this label.  The best of what I have heard has been various American and American-based British folk revivalists.  Others have been categorised in my mind as too far towards pop-folk and introverted songwriters to grab my interest.  Frankly, I did not know that they had in their archives the selections of wonderful recordings of traditional performers that are sampled on this album.

Generally speaking, the collectors - Sandy Paton and the others credited in the track listings - are not the ones whose field-work has uncovered the singers heard on this CD.  Hamish Henderson provided the introductions in Scotland, Frank Warner had brought Frank Proffitt to the first University of Chicago Folk Festival and that's where Sandy met him.  Sandy heard Marie Hare at another festival.  Dr Edward Ives directed Haggarty and Felt to Joe Estey's home and so on. 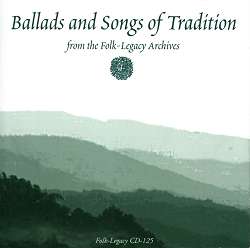 This does not detract from the importance of their work.  Certainly, we need more than one recording of major singers; and most represented here would come into that category.  Then, there's always the possibility of these subsequent visitors developing a different sort of relationship with the source singers which may unlock different aspects of repertoire.  Also, there are many examples of second visits by field workers uncovering extra verses.

The album introduces itself on the back cover thus- "A representative sampling of authentic folk ballads and songs recorded in the field by the founders of Folk-Legacy Records.  Here you will find great ballads and sprightly songs from Scotland, New Brunswick, North Carolina, the Adirondacks, the Catskills, the Ozarks and Indiana."  What this does not always make clear, nor does their extensive website at http//www.folklegacy.com, is whether these recordings are still available on this label or in some cases whether they have not been commercially available before.  Some catalogue numbers of recordings of the singers included here are referred to in the notes.  Recordings of this quality ought to be widely available ... but let's consider the performances themselves before I return to this subject, so the Scottish singers first.

Jeannie Robertson and her daughter Lizzie Higgins are already well-represented on cassette, vinyl and CD, but such is their importance that new examples of their singing are always welcome.  Jeannie made quite a number of recordings of The Overgate and Cutty's Wedding so my interest was drawn mainly to the others.  The tune she uses for Twa Brothers is very similar to that used by the Blairgowrie Stewarts but the text is very different with only about a half of the verses in common.  A comparison with the version on the recently released Topic/Sheila Stewart is interesting.  It is unfortunate that the recording level is set too high on this recording so that there is a suggestion of distortion in Jeannie's powerful performance.  It is still possible hear the wonderful control that her singing shows.  This is 1958, only five years after the Lomax recordings also made available on CD recently (see review)

but we can already hear that Jeannie's performances are slowing down.  This leaves the most satisfying performance of the four as Are You Sleeping, Maggie. (sound clip)

Recordings of Lizzie Higgins from the 1950s are rare, though those that there are show that she was already at the height of her considerable powers.  The recording of My Bonny Boy (sound clip) included here must be amongst the best recordings ever made of Lizzie and it is one of the two outstanding performances even amongst the exceptionally high standard found here.  What else did Lizzie record that day, I'd like to know.

The other exceptional performance?  This album includes one of the finest performances of a traditional ballad that I have ever heard.

The fact that is a very rarely collected ballad and a singer that I did not know of only adds to the delight.  Joe Estey was a woodsman and ballad singer from Newcastle, New Brunswick and was in his late seventies when he recorded Hind Horn (sound clip).  It would be quite interesting to play this to an enthusiast and to ask where the singer came from.  If I had been placed in that position, I think I would have considered the similarity to Willie Scott in the deliberate marked timing and use of the 'Scottish Snap' and plumped for the Scottish borders.  He also sings Watercresses and in that fine performance he sounds more English.

Vern Smelser is a fine straight ahead singer and provides a good version of St James Infirmary and both his songs are tackled with confidence and he sounds a very interesting singer.  Frank Proffitt gives the sort of convincing performance that we are used to from him.  In fact, with the exception of the Grant Rogers, who does not sound as though he deserves a place in this very select company, the album is chock full of very fine performances.

However, there are two other singers who seem to leap out of the tracks at the listener.  Marie Hare gives an absorbing performance of her broadside ballad Lost Jimmy Whallen (sound clip).  She had early Folk Legacy album devoted to her singing.  It must have been of a very high standard if they could afford to leave out this fine performance.

The final clip goes to 'Uncle' Lee Monroe Presnell, who has all the wonderful 'high, lonesome' qualities associated with the old-style Appalachian singing. (sound clip - The House Carpenter)  To hear the same song as the following track from the same State, but from the black tradition and banjo accompanied makes an excellent comparison.

The high standard of the fifty-six page booklet compliments the fine recordings and the well-thought out programming.  We get pictures, brief biographies of each singers and full transcriptions of the songs The album is enough to demonstrate that this company must have a wealth of important and fascinating stuff in their archives.  In America, as over here, people are not exactly queuing up to buy albums of traditional singing and when the switch to CDs came, they were left with large quantities of vinyl which they had reckoned on trickle-selling over the years.  Lots of goodies are now on offer at bargain prices on their website, which also gives this as a sort of policy statement.

When we founded Folk-Legacy in 1961, many of our early records were produced from tape recordings made 'in the field', that is, on location in some of the remote regions of Southern Appalachia and the Ozarks, in New York's Catskills and Adirondacks, in New Brunswick (Canada), and in England, Scotland and Ireland.  With limited resources, we have tried to keep these important traditional performances available for those who love them as we do.  But the demand for truly authentic field recordings has never been sufficient to justify investing a great deal of our capital in adding these recordings to our list of commercially manufactured cassettes, much less to have them produced as compact discs.  We are working on some CD anthologies of traditional performances, but, to keep this music alive until they are completed, we have copied our master tapes onto digital audio tapes (DATs) and now make what we call 'custom' individually made-to-order, high-bias cassettes.  No fancy four-colour inserts, true, but they do come with the familiar booklets that accompanied our vinyl LPs.

It sounds as though they should be taking a leaf out of Mr Stradling's book and using CD-R technology to produce albums in small quantities for the enthusiasts who should be very interested in what they have to offer.

(Not as obvious as it sounds, Vic.  They'd have to pay someone a wage to do what I do for nothing - and then the CD-R option wouldn't be cost-effective when set against cassettes - Ed.)