Banks of the Sweet Primroses, I am John the Farmer/My Father was a Farmer, Marrowbones, The Yorkshire Horse Dealer, Jealousy, Abergronw, Lord Bateman, Take this Yellow Handkerchief, The Crocodile, Ben was a Hackney Coachman Rare, Three Yorkshiremen went Hunting, The Ruffian Robber, Fare thee Well My Dearest Dear, The Bailiff's Daughter of Heslington, The Death of Poor Bill Brown, A Jolly Sixpence.

I had been looking forward to the release of Chris's solo CD for a good long time ... in fact, ever since I realised what a great singer he is.  This realisation can take a while to develop: as he says at the start of the booklet notes 'Some people say I act the fool too much to be taken seriously - I play scrub-board in traditional sessions; 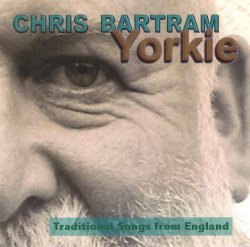 I sing my own versions of dearly-loved old songs; I love puns and malapropisms; I wear unfolky shirts with bright colours and wild patterns - but my friends know it's just a facade.  Secretly, I am very serious indeed about traditional English music'.

It's a mark of his seriousness that he considers exactly what and how he sings (and is willing to discuss it) more than any other singer I know.  His day-job is all about 'people skills', and he puts these skills to the service of the songs; deciding exactly how lines should be phrased, which words to use, to achieve the effect he requires.  This is done quite naturally and instictively, and the process is not in any way academic - but the fact that he takes the trouble to do it says a lot about his ability to hold an audience's attention so effectively.

I well remember him coming to me and enthusing about a phrase I use in my version of You Seamen Bold - 'Casting out lots as to which should die'.  I assumed I'd taken it from one of the several versions I'd used in the contruction of my song, but it appears not.  Obviously, I'd got it from somewhere else, and used it without realising it.  The point is that Chris saw the dramatic effect of lots being hurled out at hapless crew members, 'til one receives the fateful blow ... which I had not.  He also sees the humerous effects of things - like his brilliant line '... my ship is a tanker (long pause) my ship is at anchor ...'

Not only does he take care with the words he sings, he also modifies the tunes he uses - so that none of the 'dearly-loved old songs' in the listing above will be quite what you've heard before - and uses melodic variation freely throughout his performances.

No song exemplifies his skills and talent more readily than the version of Lord Bateman found here.  Chris got this from his mother, Margaret, but all that she could remember were odd parts of seven verses - some 14 broken lines in all - and a tune.  From this slender stock he has produced a wonderful short ballad, with a tune with about four different major melodic variations - all of which are to die for.  Here's a snatch (sound clip)

Another favourite of mine is Fare thee Well My Dearest Dear, the words of which haven't been too much altered from the Penguin version, although a telling final verse has been added.  However, the splendid tune seems to be very much Chris's own (sound clip).

(Several of Chris's songs appear in MT's Singers' Songbook, if you want to find out how his versions came into being, and his motivations for creating them.)

I won't go on any more about what a great CD this is - buy it (from www.agpstudio.co.uk) and find out for yourselves.  But I really must say how much pleasure it gives me that records like this are being made in the 21st century - only five years ago I wouldn't have believed it possible.