The beggar boy of the north
traditional northern tunes 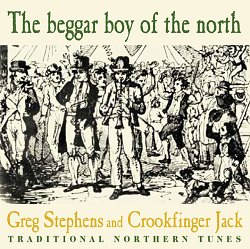 'I'm not sure about reissuing old material - it's certainly not how I choose to play nowadays.  But it has a certain quirky, nostalgic interest, I hope.'  So wrote Greg Stephens in the note accompanying this CD.  And he's quite right about how interesting this music is - and a part of that interest lies in the similarities and differences between this record and the splendid Trip to the Lakes (see review) of some 23 years later.

The twenty-four tunes included on the present CD represent a cross section of the music played by traditional musicians in the northwest of England over the last four hundred years or so; some were, and are, widely known and played throughout the British Isles, while others only seem to have enjoyed local currency.  This is the music of the area from Chester to Carlisle, bounded by the Irish Sea to the west and the Pennines to the east.  I would suggest that many of my readers will not have heard many of them before.  I've played in sessions all over the country for longer than I care to remember - but I only recognise about ten of them.

The band, Crookfinger Jack, is also likely to be new to most of you.  According to the liner notes, their LP on Fellside 'sunk without a trace' in 1978.  But they also seem to have done a fair amount of BBC broadcasting work in the mid- to late-'70s, so you may have heard them in that medium.  What does seem extraordinary is that - if I'm reading the liner notes correctly - Crookfinger Jack only ever played one live gig!

This may account for the LP's poor sales, and for the rather sad section of the liner notes where Greg seems to blame me for the way southern English country music became popular in the '70s and '80s, whist the northwestern music didn't (in his opinion).  This seems a rather silly position to take, if one remembers the enormous popularity of the New Victory Band, for example.  Apparently it was because we called our music 'English country music', when we should (according to Greg), have called it 'southern English country music'.  Given that a substantial proportion of what we played didn't actually come from southern England, I think this would have been a rather dishonest genre for us to have claimed.  It all sounds a bit Big-End v Little-End to me.  If there is any truth in Greg's claim of southern music pushing northern into the shade, it may be more as a result of Oak and the Old Swan Band having made records several years earlier (1971 and '76) than Crookfinger Jack did.  And having played rather more than one live gig!

Anyway - the music on this CD is great, and if it wasn't recognised as such in the late-'70s, it certainly should be now!  The band was: Dave Lyth and Chris Ashley - fiddles; Peadar Long - whistle, flute, clarinet, tenor sax; Chris Hill - cello; Greg Stephens - tenor banjo, mandolin; Gordon Johnston - guitar, bodhrán; Pete Mickelborough - double bass.  They can make a very big noise when they all play together but, it sounds to me, they rarely do.

It's difficult to record seven musicians at the same time and be able to hear the contribution of each with any clarity.  Here, it's the fiddles and the banjo which are usually to the fore, with the double bass in the background - other instruments rise to the top periodically.  A good example of the ensemble sound is track 1 - Canny Cumberland/Yorkshire Lasses/The One Horned Sheep (sound clip - Yorkshire Lasses)

Quite a number of the other tracks have a slightly 'arty' or 'early music' feel to them - appropriate enough, since many of them are, indeed, old - but these don't for the most part appeal to me as much as the simple dance tunes ... which certainly do!