Almost a Gentleman - Songs and Recitations.

"I don't know what the subject of my talk will be and, after I've finished,
you won't know either.  So we're starting level."

The great Belfast born singer and putter-over extraordinary of monologues, Fred Mackay, died on 21st March 1997.  And now, into my grasping paws comes this CD of magnificent, timeless performances by the equally late and equally great Billy Bennett.  Fred it was who first introduced the Bennett repertoire into English folk clubs.  He held himself solely responsible for its ongoing popularity.  He was probably right.  Fred first saw Bennett in the 1930s in Belfast at the Empire and the Hippodrome - " a big man with a painted on moustache, evening dress, hobnail boots and a muffler".  A muffler? Perhaps it was cold at the Belfast Empire.  Various reports agree on Bennett's stage attire: shrunken dress-suit, flapping dicky and seedy collar, red silk handkerchief tucked into waistcoat top, hobnail boots; in one hand sometimes a flattened opera hat, in the other a handkerchief to mop away ever-present perspiration.  No muffler!  Still - almost a gentleman! Fred had to see Bennett again to figure out how the act worked.  "It was his terrific mock sincerity, how he could come off with the most ridiculous rubbish with such sincerity - that was the man's gift".  Nineteen tracks here, ladies and gentlemen, of unique and hilarious po-faced rubbish.

"My father was a very clever comedian.  At present he's in hospital.  He broke two of his fingers cracking jokes to a deaf and dumb man." 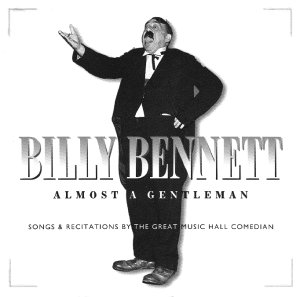 His father was John 'Jock' Bennett of 'Bennett and Martel', a knockabout double act on the English music halls at the turn of the century.  The son followed the father into show business after a brief spell working in insurance.  He trained as an acrobat, then ran away and joined the army, serving in World War One and being decorated.  During the war, he became a canteen comic and, on his return to the halls in 1919, he performed a soldier act, complete with martial airs and songs like It's a Long Way to Tipperary.  This was not appreciated at the Theatre Royal Dublin by the audience or the manager and Bennett felt obliged to resort to disguise for his own safety.  Thus, the false moustache and the plastered quiff of hair.  Soon, the army clothes went in favour of ill-fitting evening dress.  The army boots remained.

Apparently, he had written parodies when a schoolboy for his father's music hall friends, so naturally he continued, producing monologues which were, in the main, skits on well-known Victorian monologues and poems, such as Robert Service and Cuthbert Clarke's The Shooting of Dan McGrew, Kipling's Road to Mandalay, George R Sims' Christmas Day in the Workhouse

and Amy Woodforde Finden's Kashmiri Love Song from 'Indian Love Lyrics', which became, in Bennett's hands, the impenetrable and insane parody Ogul Mogul - A Kanakanese Love Lyric (sound clip).  No matter that many of the originals have faded into obscurity ("Years have rolled on since that happened"), the surrealist imagery of the Bennett rewrites live on - literate, audacious and screamingly funny.

"I'm liable to burst forth into song at any given moment!"

The newly issued CD was originally released on vinyl by Topic in 1978 and is repeated here with five extra tracks, making a total of nineteen.  Monologues being the man's claim to fame, it is surprising that there are only six bona fide examples here.  (Mandalay is half song-half monologue; Family Secrets is comic patter - a string of one-liners).  Of course, the monologues would be very difficult to put across on a recording - we cannot see the performer, his ridiculous attire, his unwavering straight face, and he has not got any audience reaction, which must affect his delivery.  Thus, The Charge of the Tight Brigade and The Miser suffer from flat rather monotonous delivery.  The latter is, by the way, a curious item, evidently a late arrival in the Bennett canon, using references to many other of his monologues.  As if to emphasise the lack of audience, Nell, one of his most well-known pieces, has him saying a line which clearly should have been spoken by either the audience or the members of the orchestra pit.  Make no mistake, the spoken pieces are still very funny, just slightly less accessible than the songs, which are a revelation.

The indisputable masterwork here is My Mother Doesn't Know I'm On The Stage in which the singer spells out the lengths to which he is forced to go in order that his mother should not discover his true profession.  She can think him a bigamist, a thief, a murderer, but not an actor!

"Sometimes she sees the powder on my clothing
And then it's such a nuisance to explain.
If she thought it was powder she'd go crazy
So, of course, I have to tell her it's cocaine".

Among the other songs, Mottoes and Ogul Mogul stand out as brilliant nonsense songs.  The first half of No Power on Earth is all cod patriotics - "England, Ireland and gallant little Wales are gathered round the dear old flag" and "No power on earth can pull it down" ; the second half details a few more things you can't pull down - you can imagine!  The Only Girl I Ever Loved and I'll Be Thinking of You, while very funny, are more music hall mainstream than vintage Bennett, while She's Mine is nothing more than an extended "My wife's so fat that…." joke, and is the only real duffer in the collection (one track out of nineteen - not bad!).

I'm afraid that Bennett very occasionally indulged in racist and sexist jokes that only very slightly mar enjoyment of these tracks.  Three songs of a kind are Don't Send My Boy To Prison, Please Let Me Sleep on Your Doorstep Tonight and She was Poor But She Was Honest, cod melodramatic Victorian songs, sung by Bennett in his best beery voice (and always pitched just a little too high, to achieve the right slightly strangulated delivery), accompanied by similarly beery male chorus and minimal banjo.  Great fun.

"There's a farm on the horizon looking eastward to Siam,
We could have some ham and eggs there, if they had some eggs and ham". 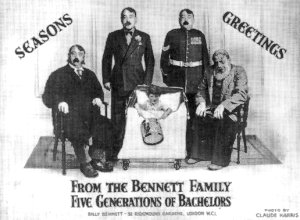 I find this sort of thing irresistibly funny.  What must he have been like live on stage with lines like the above given the celebrated deadpan delivery.  (The one or two extant film appearances scarcely do him justice - all head and shoulder close-ups and flat delivery.) "Never laugh at your own gags" he wrote in an introduction to one of Billy Bennett's Budgets , published small volumes of his monologues, now out of print.  "Even the heartiest scream from your listeners should not bring a semblance of a smile to your sphinx-like countenance.  Let the gag do its own work".  You see, he needed a live audience to not react to.  We have to imagine what he was like on stage, but this collection of little diamonds gives us a perfect explanation of the awe in which this music hall comedian is still held.  Buy one and laugh!  As another great comic once said:  "There'll never be another".

"And that's all there is of that"