During our interview with Topic Records about the Voice of the People series, a chance exchange between Tony Engle and Fred McCormick set me off on a subject which had been bothering me for some time.  Namely, the way in which the English, seemingly uniquely, have set a line in the sand between what is seen as 'Traditional' and 'Revivalist' in music and song.  Perhaps the River Styx would be more apt, since no living mortal may cross it according to many of our English music commentators and aficionados.  Let me hasten to add that Musical Traditions and I, myself, have in the past been equally guilty in this respect - but I was concerned to see that Voice of the People, with its 'new approach for a new audience' was still trotting out the same old line.

Thus we saw that a place was found for Willie Kemp, who learned to imitate Aberdeenshire farm servants in the kitchen of his father's Oldmeldrum hotel, and spent the rest of his life profiting from their exploitation as a semi-professional singer, recording artiste and radio entertainer - yet Kevin Mitchell, Jackie Daly or Len Graham (to take three examples whom Ron Kavana found acceptable for his GlobeStyle Irish series) were excluded.  It really does seem to me that the movers and shakers of the '50s and '60s seem to have come to a joint decision that "before us, all was traditional ... and after us, it's only the Revival".  That they had the right to that view is not in question - the problem was that the rest of us were only too happy to go along with it!

Again, this might not have been remotely important, were it not for the fact that any English singer or player who became interested in the real traditional music, and was prepared to learn from the old folks - and indeed, in those days it was still possible to play and sing along with them in their own social situation - was nonetheless condemned to be thought of as a revivalist for the rest of a long life of music-making ... or worse, as a pastiche.

So in England today there aren't any of that new breed of traditional performer like Kevin, Jackie, Len ... or any of the countless others in virtually every other country in the world. 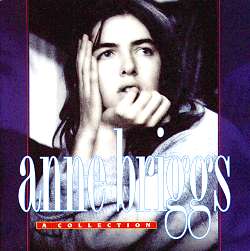 Musicians who can be seen as on a par with their traditional predecessors and eqully valid - though a different sort of traditional, since they live in a different world.  Which brings me to Annie Briggs - who just possibly might have been.

Because - be in no doubt - there is some very wonderful singing on this record.  I'm not talking about entire songs necessarily, but there are verses and sets of verses which you would be pleased to hear from a 'great' traditional singer -

in my opinion!  More to the point, she was barely 18˝ when she recorded The Recruited Collier (sound clip) and had been singing traditional songs for only about three years - and I don't know anyone who's come remotely near her performance of it in the 36 intervening years!

Not only is the singing right - so is the attitude.  In the booklet notes she's quoted as saying of the field recordings of traditional singers she heard when she first started: "... the singing struck a chord within me and I immediately felt "That's my music, that's what I should be singing."  I didn't know it was called folk music, I just heard it and it was mine."  I had the same experience myself, with English dance music ... but being less perceptive, it took me until I was about 23!

The booklet, written by an obvious fan, Colin Harper, reminds us too that she was far more concerned with living her own life and 'the freedom she found in Ireland, the singing without stages' than she was with the prospect of fame, exposure, or even wealth which the 1960's folk scene was both willing and (though it may seem strange now) able to offer.  She was notorious for disappearing for weeks, months at a time, cancelling gigs, or even just not turning up if she didn't fancy it.  In the 18 months between mid-'63 and early '65 she only performed in public five times.

Of the 22 tracks presented here, perhaps around half might be seen as having little interest to MT readers - two are self-penned and a number of others are either lightweight or only moderate performances.  But a few really do bear closer scrutiny - the songs themselves are by now pretty well-known, but the performances are perhaps less so, given that the original vinyl has been so long unavailable.  Top of the list has to be Young Tambling I suppose - a ten and a half minute epic in every sense of the word, which displays Anne's strengths and weaknesses in full measure.  (A sound clip from such a ballad would be rather pointless, I feel.  You need it all - or nothing).

It has to be said that anyone who can keep your attention for this length of time, on record - without the personal interaction which is so vital a part of live performance - really must be a very good singer.  She does ... and is.  The very full text comes courtesy of Bert Lloyd (who, unusually, admits to having cobbled it together from Child and recent collections of fragments from country singers and Travellers), and tells the whole story of otherworldly seduction, attempted abortion, Elvish capture, magical deliverance ... the redemptive power of love and (as in Prince Heathen) the indomitable strength of a committed woman.

Many critics have drawn attention to Briggs' lack of emotional dynamics and her over-reliance on simple (and repetitive) decoration, and on her own unusual personality - to quote Harper 'sexy, wild, mysterious, otherworldly and vulnerable all at the same time' - which came across very strongly in her singing, despite her using no obvious ploys to achieve it.  This is valid criticism I think, but here she does manage to make one verse sound different from the next, again without using any of the more obvious mechanisms.

One such would have been melodic variation - which she can do, and does, in Stonecutter Boy (sound clip), The Cuckoo and Gathering Rushes most successfully.  I wish she'd used it more here, particularly on the dying fall at the end of each verse, which becomes terribly tedious after a while.  Maybe she'd not been singing the song long enough before committing it to tape - for most of us a lifetime would not be long enough - and one must marvel at so young a singer making an acceptable job of it at all.

Back then, the extent to which Bert Lloyd influenced her singing was often discussed.  Certainly, he influenced her repertoire markedly, giving her songs in considerable number which he thought might suit her - but he never gave her guidance or directions.  Just as well, since she was constitutionally averse to being directed.  But they had a rapport without a doubt - he was a very engaging character - and might have had something of a father figure role for the girl who'd lost both her parents when very young and been raised by an elderly aunt.  Personally, I hear little of Lloyd's tricksy mannerisms in her singing.  The extent to which he 'personalised' the songs which passed through his hands is rather more open to question - but would require an extremely well-read musicologist to fully answer.

My own preferences here tend, as might be expected, towards the sort of songs I might think of singing myself, and of the several already mentioned, perhaps The Cuckoo (sound clip) is my favourite.  A simple song, both sad and joyful, made up almost entirely of floating verses (from Ireland, in this case) and virtually without a 'story'.  Yet, at the end of it you know that it has been much more than the sum of its parts, and experience that sense of completeness that so often comes with traditional songs - the feeling that, four short verses notwithstanding, nothing more needs to be said on the subject.

I also like Gathering Rushes in the Month of May very much (sound clip) - perhaps for the text as much as the singing.  It was collected in Suffolk in 1937 (though, typically, we're not told from or by whom), and manages to turn this often rough and slightly lewd song into a compelling and challenging anthem for a proud single mother, while retaining the father's righteous anger at his daughter's predicament: "I wish I had a firebrand, to burn the building down, where you met with him on a May morning".

Only about four of the songs are accompanied - mostly by Anne herself - and all are quite simply done, yet the straightjacket the accompaniment imposes robs these items of the life I know they would have had without such encumbrance.  This is particularly noticeable on this CD, where the listener has become used to almost an hour of her singing unaccompanied.

I feel physically uncomfortable hearing them - I keep wanting to thrust my elbows outwards ... to push off the constricting chords (cords?) and breathe freely with a natural rhythm.  I can imagine that this is what being in an 'Iron Lung' might feel like. (sound clip - Willie o' Winsbury)

So - not a record of a great singer, but of one with astonishing potential.  All the flaws, and there are many, are obvious ones and would have been dealt with in the normal course of a life with music by any singer with half her skill and imagination.  She's now 55 - and could have been so good at this point in her life that it hardly bears thinking about.  There's no knowing why she turned her back on it all for a quarter of a century - other than the obvious fact that there were more important things to do.  What does defy understanding is the the fact that she really did give it up so completely - didn't sing around the home, for the kids, in her local community ... since it obviously meant so much to her as a girl.

Whether my ideas expressed at the start of this review had anything to do with it, I have not the faintest idea.  What I do know is that people in her position in the '60s (and there were a number) got precious little encouragement to think about the music as anything other than a 'career' or a hobby ... when what it should be is a way of life!